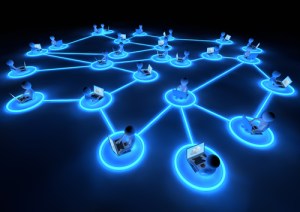 Above: Our creepy, socially-networked future.

If Facebook files its paperwork for an initial public offering this week, as many expect it to do, we’ll be on the road to one of the biggest tech IPOs in recent history.

The offering will probably raise $10 billion in cash for the company and will value Facebook at somewhere between $75 and $100 billion, making founder Mark Zuckerberg, who holds an estimated 24 percent of the company, a billionaire many times over. That valuation is not far off the implied valuation of about $80 billion that the company currently has on secondary market Sharespost.

It’ll likely be priced to pop, unlike Zynga’s IPO. In other words, the underwriters will set a share price that’s slightly lower than what they figure the true market valuation will be, so the stock will pop up to its “natural” level on the first day of trading, like an air balloon held underwater and then suddenly released.

We don’t yet have access to detailed financial data about Facebook — that will come when the company files its S-1 forms — but here are some things we do know about the company.

Facebook claims it has 800 million registered users worldwide, and that half of them check into the site every day. It won’t be long before the company reaches a billion customers which is a milestone few other companies have reached. Microsoft, Nokia, and Walmart have probably done it — though they all have a billion paying customers, whereas Facebook’s registered users don’t pay to use the service, they just provide the attention that advertisers pay Facebook for.

Still, paying customers or not, 400 million is a lot of people. Social networks have come and gone, as the party moved from Friendster to MySpace to Facebook, but no social networking company has ever reached this volume. That alone is significant.

Facebook has more than twice as many U.S. users than Google did at its IPO.

VentureBeat contributor Rocky Agrawal points out that Facebook now has 100 million more U.S. users than Google did at the time of that company’s IPO. In December, Facebook had 162.5 million unique users in the U.S., according to Comscore Media Metrix. By contrast, Google had 61.9 million when it went public in August, 2004. Google was then the No. 4 web property, Agrawal points out — the same position Facebook now holds.

According to Comscore, Google, Yahoo, and Microsoft all attract more unique U.S. visitors each month. But the web is a lot bigger now than it was in 2004, so Facebook is starting with a much bigger pool of regular users than Google had in 2004.

People spend time on Facebook. A lot of time.

When you look at Nielsen’s ratings of the top U.S. web properties, Facebook comes in at No. 2, after Google, with an audience of 153.4 million. But the time those people spend on Facebook dwarfs every other site in Nielsen’s top 10, with Facebook visitors spending an average of 6 hours and 51 minutes per person per month.

That means people in the U.S. spend more than one billion hours per month using Facebook, every month.

It makes sense, when you think of how people use these sites. At Google, Yahoo, Amazon, and even Wikipedia, most people come to the sites to look something up, then they move on. At Facebook, it’s hard to visit without getting sucked into the latest updates from your friends, clicking on interesting videos they’ve shared or looking at your childhood friend’s latest photos of his baby.

Facebook may not be making the best use of this time — its revenue figures will tell more — but that level of what used to be called “stickiness” means it has an awful lot to work with.

Facebook is building a new operating system for the web.

Facebook is not just a social network, it’s a development platform upon which you can build applications. With a new array of developer tools and the ability to share information about what people are doing in real time on its Open Graph, Facebook is attempting to make itself into the platform of choice for any web developers.

Facebook started with one verb — you could “like” things or not — but is now expanding its lexicon, so Facebook apps can let you “watch,” “read” or “eat” things. In time, any human experience will be able to be codified in a Facebook app and recorded on your Timeline.

I don’t know whether developers will flock to Facebook. For now, building an application on your own website gives you far more control, as well as ownership of any customers you bring in. If you start using Facebook to help authenticate visitors, or to manage your comment system, as many website builders have done you are ceding some of that value to Facebook.

As long as Facebook offers value to developers that exceeds the loss of control it demands, it will be able to attract them to its platform. But at what point do they decide that enough is enough?

The reason investors get so excited about Facebook is the same reason those of us who love the open web get nervous about it: Facebook is building a walled garden that will give its customers everything they could possibly want, from cat videos to news analysis by the Washington Post, in one place. Unlike the open web, Facebook will control everything, making the experience consistent, ensuring safety, enforcing rules about decency and copyright and identity, and taking a cut of every transaction.

Here’s another way to look at it: Facebook is trying to do what Aol failed to do in the 1990s: Create a safe, family-friendly, completely controlled alternative to the open Internet.

That has enormous implications for Facebook’s potential future earnings. Of course it makes people like myself, who came of age during the Internet’s early days, exceedingly wary.

Only one company has made significant money from that platform so far.

Despite Facebook’s massive reach, stickiness, and the all-encompassing nature of its platform, there’s one shortcoming: It’s not actually monetizing itself very well right now.

In fact, there’s only one company that’s been truly successful building apps on the Facebook platform, and that’s Zynga, which grew to a $9 billion powerhouse largely on the basis of its Facebook relationship. While many companies have built apps, Zynga is the only company to have gotten big enough from its use of the Facebook platform to hold a big IPO itself.

As Forrester analyst Nate Elliott writes, marketing on Facebook doesn’t actually work that well, and the company’s revenue model is pretty simplistic.  That may be one reason why it hasn’t attracted much corporate spending to date, and each Facebook user is actually worth less to the company’s overall value than Google’s users are to it. In order to grow into a meaningful platform that will attract and retain many developers, and resist onslaughts from better-organized platforms, Facebook will need to solve both of those problems.

A big pile of cash from its IPO could certainly help.