EDITOR’S NOTE: Each week, I’m going to write a column on an aspect of the business and technology world that VentureBeat covers. My colleague Dean Takahashi will write a column on videogames called DeanBeat. Together, these columns will be available first via VentureBeat’s email newsletters, and one day later they’ll appear on the website. If you want to read them early, please subscribe. And let me know what you think! 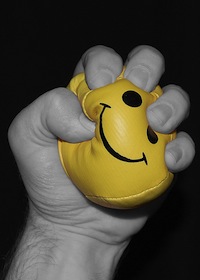 This is a week of tech conferences. Demo, TechCrunch Disrupt, Microsoft Build, the SF MusicTech Summit and Intel Developer Forum are all happening more or less simultaneously over the next few days. Then the Tokyo Game Show starts later this week.

In the coming weeks, Facebook F8, Adobe Max, Oracle OpenWorld, the CTIA Enterprise and Applications show, and the Web 2.0 Summit all hit our agendas.

If you are involved in the tech economy, the fall is one of the busiest times. It has always been this way.

So it’s no wonder that the stress sometimes gets the better of people.

For tech entrepreneurs, the stress is multiplied by the demands of launching a new company and new products in the increasingly narrow windows of attention that are available. For companies exhibiting at new-product showcases, like Demo (which is co-produced by VentureBeat and IDG), everything is riding on a six-minute stage appearance — if you’re lucky — plus a few short interviews with journalists, venture capitalists and big company executives right after your stage appearance.

Miss that window, and your company can be dead in the water, or so it seems.

In reality, much of the urgency around an onstage launch is artificial.

I’ve been covering conferences like Demo for years. I’ve also been on the other side, as an entrepreneur showcasing my wares.

In 1999, another journalist and I hit upon a killer idea for a content startup. We were going to create, license and syndicate practical articles, like tips and tricks and how-to guides. We hired my brother to code up a prototype. We spent a significant chunk of friends and family money incorporating the company and then taking our ideas and our prototype to Demo, where we proudly showed off the fruits of the previous year’s labors.

It was a stressful time. I was working at home, since we didn’t have the money to spend on an office. My wife complained that I spent too much time stalking around the house, shouting into the phone. I got infected with “dot com” syndrome and became convinced that we needed to grow big, fast, and figure out how to make money later. I thought finding the right venture capitalist — or really, any VC — was the key to success.

In retrospect, it was wasted effort and time. Not because Demo or events like it are a waste of time (far from it), and not because VC money is bad, but because we weren’t ready.

We were a couple of journalists and one junior programmer. None of us had any significant business experience. We had a decent idea, and in fact we were ahead of the market by several years in our focus on syndicating content rather than trying to build a portal. If we’d executed better, we could have been like eHow, except with a business plan.

The problem was we had no idea what we were doing, business-wise, and we were so focused on the external aspects of the startup, like our stage presentation, that we neglected to figure out the basics. We would have been far better off bootstrapping the company, figuring out a way to make money first, then growing little by little as we expanded our abilities to produce quality content economically, reach customers and syndicate effectively. In short, we would have been a lot better off if we’d read the 37Signals founders’ book, Rework. Unfortunately, that book was published 10 years too late to help me.

Fortunately, the lesson came relatively cheap for us anyway. We were late to the party, and by the time we were onstage at Demo in the spring of 2000, the dot-com bubble was already bursting. A year or two earlier and we might have found some VCs dumb enough to back us, but in mid-2000, nobody was going to throw money at a couple of clueless first-time entrepreneurs. By the time we figured that out, it was too late to recover, so we wound the company down and returned what was left of our investors’ money to them. It was a humiliating episode, but at the end of the line, not that much money was lost.

The problem is that this lesson escapes many entrepreneurs. Worse, that lack of wisdom, and the emphasis on mindless speed, shows through in their products.

It’s easy to see the overwhelmingly omnipresent, increasingly fast-paced nature of modern life as an inevitable side effect of mobile technology. But I don’t think it’s inevitable: Instead, I see it as a side effect of how most technologists live. When developers, project managers and entrepreneurs live at an accelerated, always-on pace, it’s more likely that they’ll create products that fit into and encourage that same lifestyle.

In other words, we are living with products created by people who don’t know how to turn off the cellphone. So of course we feel like we can’t turn off our own cellphones.

We need to learn how to step back, turn off, and make technology respond to our needs, not the other way around. That’s especially true of those who make technology.

And the first step in doing that is to realize just how artificial, and temporary, this autumn stress really is.

Let it out slowly.

And I’ll see you at Demo.