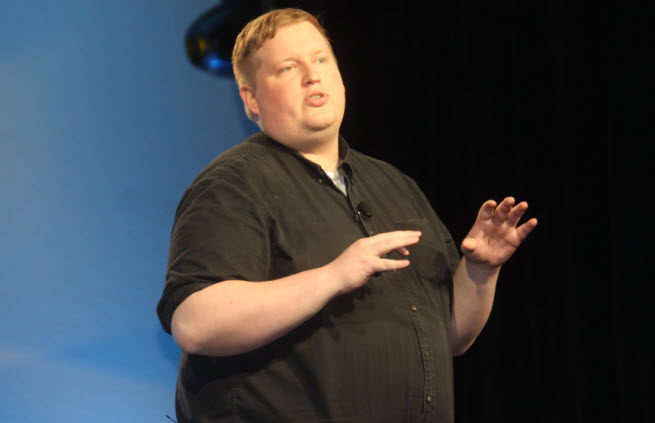 Dynamics has been shaking up the credit card and payment industries since it debuted and won a top $1 million prize at DEMO Fall 2010. Now it’s being disruptive again as it launches a way for developers to get direct data on customer purchases and extra revenues from each transaction.

Jeff Mullen (pictured above), chief executive of Pittsburgh, Pa.-based Dynamics, said in an interview with VentureBeat that the new ePlate system will enable developers to reward their loyal users with all sorts of personalized rewards to drive stronger consumer engagement. Mullen calls this the “first developer ecosystem for payments,” and he believes it will turn the payments world upside down.

“It is a revolutionary system,” Mullen said, speaking on stage at the DEMO Spring 2012 conference. “We now have the mobile payments system.”

Normally, credit card issuers don’t share proceeds of a transaction with a developer, nor do they share the pattern of a user’s transactions. Dynamics, working with ePlate adopter UMB Financial bank through its credit cards, will ask the user for permission to share a relevant transaction history with the developer of a product that the user has purchased. The developer can then analyze the user’s behavior and, if it chooses, offer personalized rewards to that fit the user.

“We think this is going to create a rewards system that is truly powerful,” Mullen said.

At the heart of the system is the Dynamics ePlate mobile payment device (Mullen says he no longer calls it a credit card), a paper-thin electronic credit card. It has an electronic stripe like any traditional credit card. It also has programmable buttons that can alter the usage of the card, depending on which button the user selects. You could, for instance, use a card as a credit card, or push a button and use it as an ATM card.

Dynamics will award the developer in its ecosystem a return amount of 25 basis points, or a quarter of 1 percent of a transaction. The developer can then use that transaction money — 25 cents on a $100 purchase — to give something back to the user that they really want. The credit card issuer can also take advantage of a new technology that Dynamics enables on its cards: the ability to change the number on the card by pressing a button. You can press a button if you prefer one kind of reward, or press another button if you prefer a different kind of reward. The button changes the data on the magnetic stripe so that the proper account is accessed when the card is swiped.

A user can access Dynamics’ Experience Manager software through a phone or web site. The manager provides a list of experiences that a user can select for the card, changing the nature of the buttons as the user prefers. That is, you can log into a site and change the functionality of your card’s buttons. Whatever happens, Mullen said, the customer has to approve sharing of any data.

“In this case, the data is being used to add more value,” Mullen said.

As mentioned, UMB Financial will be the first bank to issue the new ePlate mobile payment system for consumers. ePlate links payment devices with unique content and experiences, empowering a consumer to engage with brands that excite them with every swipe or online purchase. The brand can analyze the time, place, location, and amount of a user’s purchase and then immediately act to offer a unique social reward or mobile game content based on that knowledge.

“Now, the experience of every credit card in the world can be captured in a single payment device that is issued by a single issuer,” said Mullen “And developers can use consumer approved payment data and a new revenue stream to develop new functionality and experiences that cannot be offered on any other payment product.”

Mullen said his company has worked on the ePlate technology for two years, and UMB has actively worked alongside it during that time. A credit card issuer makes money on the card through interest on transactions. Dynamics makes money from the bank, which purchases its electronic credit cards.

Dark Horse Comics plans to use the ePlate system to offer differentiated content to users. With Dynamics, a user can make purchases and earn digital comic book rewards. After a user collects a certain number of digital comic books, Dark Horse will send exclusive physical copies of comic books to the user’s home. Dark Horse Comics chief executive Mike Richardson said on the DEMO stage that the Dynamics technology allows the company to offer new kinds of deals.

Upper Deck is also creating a new digital trading card system with exclusive sets of digital cards. When a user collects a full set of digital cards, the developer (Upper Deck) can then mail physical cards to the customer’s home.

Another participant is Evil Genius Games, which makes an iOS and Android game that lets you experience the feeling of the craziest shopping day of the year every time you make a purchase. Game developer Avenue Social Games is using ePlate to create a massively multiplayer online game on Facebook that adds adventure to everyday shopping.

Social Cubix Games is creating a Facebook game where users engage in a scavenger hunt as they make purchases around the world. Jersey Jack Pinball lets users earn big discounts on its products while getting a chance to win pinball machines. Lemonade Day lets users make purchases that help children.

Mullen said that Dynamics can offer up-selling or cross-selling with any purchase. If the user approves the offer, which could be something like “do you want fries with that burger,” the developer can immediately generate a bigger sale. You can, for instance, add a $1 secondary donation to a charity every time you go to the grocery store. Toys for Tots is one of the participating charities.

Even more interesting: Mullen said that a developer can offer you a coupon for a free coffee at Peet’s Coffee if you buy 10 cups of coffee at Starbucks.

Dynamics also enables a developer to give a statement credit to a user. A developer can give a $10 credit to a customer on the user’s monthly statement when the person spends $100 in a retail location. That’s a lot of flexibility and merchandising power that now resides in the hands of developers within the payment ecosystem, Mullen said.

“A game can actually change on you once you make purchases,” he said. “The vendor will know that you bought this comic at Joe’s comic store, and they will be able to tie a particular reward to that. Now they may use a promotional tool to incentivize you to go to the local hobby store.”

Dynamics will introduce an applications programming interface later this spring, Mullen said. The devices are coming for the holiday season in 2012.

The company raised its initial round of $5.7 million from Adams Capital Management. After debuting in the fall of 2010 and then launching products with partners around the world, Dynamics raised a $35 million round from Bain Capital Ventures. Mullen said the company now has more than 80 employees.

Mullen is presenting at a session at the DEMO Spring 2012 conference today in Santa Clara, Calif. 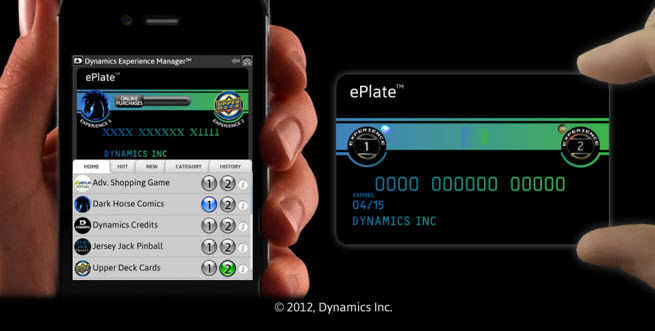