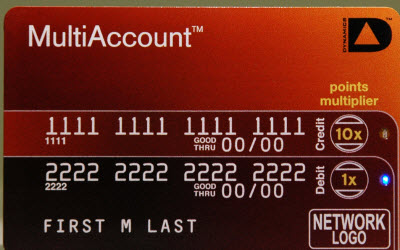 Dynamics, the big winner in the 2010 DEMOfall conference, has raised $35 million in funding to accelerate its business of making computerized smartcards and payment systems.

The funding led by Bain Capital Ventures is the largest second funding round in the payments business this year and is the largest round in the history of Pittsburgh, Pa., where the company is based. That says a lot about the potential of Dynamics, which is seeking to bring old-fashioned credit cards into the modern computer age.

In the U.S., most credit cards use magnetic stripes that are read by 1970s-era card readers. Dynamics uses those same magnetic-stripe readers, but it has features built into the plastic of its Card 2.0 credit cards that enable more innovative features without requiring a multibillion-dollar upgrade in the payments infrastructure.

For instance, as you can see in the top image, a user can press a button on the card in order to switch it from a credit card to a debit card or vice versa. This “multiaccount” card can rewrite the numbers on the magnetic stripe as needed. That allows credit card issuers — who spend $20 billion a year on marketing — to truly differentiate themselves from the rest of the pack, said Jeff Mullen (pictured right), chief executive and founder of Dynamics, in an interview.

Mullen said the company is also preparing to expand beyond its first major customer, Citibank, to other credit card issuers. And it is also working to expand into new markets around the world, including the contact-chip card market in Europe, the radio frequency identification (RFID) card market in Asia, and the phone-based payment systems that are beginning to launch with smartphones.

“Our goal is to innovate in payments and be agnostic about the platforms,” Mullen said.

Bain Capital Venture’s Jeff Schwartz, managing director and founding partner, will join the board of Dynamics. Mullen said the round was oversubscribed and “Dynamics had a lot of suitors.” He said he chose to go with Bain because of its experience in financial technology investments.

Previously, Dynamics raised $5.7 million from Adams Capital Management, which also participated in the new round. Mullen said the company will use the money to more than double its workforce of 30 by the end of the year. Mullen said the company’s current customers are increasing their unit purchases of the cards and that Dynamics is arranging for high-volume manufacturing of the cards in the U.S. and abroad.

“The 40-year business model cycles at card issuers are turning into 3-year business model cycles,” said Joel Adams, General Partner, Adams Capital Management. “As such, the industry is demanding a fast-cycle payments platform. With this investment, Dynamics will have the first fast-cycle, high-volume consumer electronic manufacturing capability in the payments industry.”

He said payment systems have evolved slowly over time, but there’s a lot of money to be made if even a small percentage of the world’s consumers switch over to new kinds of payment systems. The incentives include better options and more security.

Scwhartz  at Bain Capital Ventures said, “Dynamics’ technology and product applications have been enthusiastically validated by several top card issuers, payment networks, and consumer groups, and we believe this will be the most impactful technology company in the payments industry.”

Here’s more of what we’ve said about Dynamics before:

Dynamics hopes to upgrade magnetic stripe cards to computerized smartcards with better security and multiple accounts per card — without making any changes to the existing infrastructure of magnetic stripe readers in 60 million locations.

The Electronic Stripe is the brainchild of Mullen, who put himself through business school as he was starting his company in 2007. He has recruited a crack team of payment specialists such as Philip Yen, a former executive vice president at Visa.

For instance, if you press a button on one of Dynamic’s cards, it will switch from one credit card number to a different one (and change the indicator light so you know which account is active). You can thus have multiple credit-card accounts from one bank, such as a personal account and a business account. The purchase is processed on Visa, MasterCard, or other card networks as a normal transaction.

Dynamics stands a great chance at getting past the barrier of older infrastructure. Radio frequency identification tag (RFID) readers are being put in more places in order to accommodate electronic cards, but they still account for only about 3 percent of all of the readers in the market, even after billions of dollars in infrastructure investment. Another innovation, near-field communications, requires chips to be built into cell phones and it also means that merchants have to adopt new readers. But Dynamics’ strategy has the most benefit for the least pain. A programmable card fits with the strategies of a lot of banks, which are issuing different cards for loyalty programs or budget management.

Mullen has put a lot of thought into the problem. He was trained as an electrical engineer at Carnegie Mellon and wanted to be a patent attorney after graduation. He went to law school and was a prolific inventor himself, with more than 150 issued and pending patents. But he wanted to start his own company, so he went back to Carnegie Mellon for his MBA and set up Dynamics in 2007 across the street from the school. By day, he ran the company and found time to get course work done when he could; his teachers accommodated his crazy schedule. The company won various grants in business school contests, adding up to more than $400,000.

Dynamics Inc. launched at DEMO in Fall 2010. Check out their video here and more at DEMO. Got six minutes to launch your game changer? We’re finding top shelf thinkers from around the world ready to showcase their products at DEMO Fall, on the same stage where companies like Netscape, TiVo, E-Trade, and Java got their start. After you sweat out your six minutes of fame, head off the the DEMO pavilion to chat with potential investors, partners and show off the goods.  Apply for your spot here. Demo Fall 2011 is located at the Hyatt Regency in Silicon Valley, September 12-14.