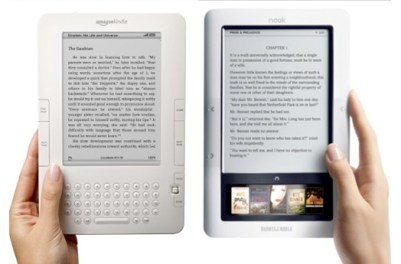 Sales of e-books in the U.S. tripled over last year to $90.3 million in February — surpassing paper to be the most popular book format among all major trade categories — the Association of American Publishers announced on Thursday.

That’s an impressive amount of growth for e-books — as a point of comparison, e-book sales totaled roughly the same amount ($91 million) for the entire first quarter of 2010, according to the International Digital Publishing Platform.

We can thank strong sales of e-book readers like the Kindle, as well as the iPad’s massive success and reinvention of the tablet form factor, for the overall increase in digital publishing popularity. The association also points out that post-holiday e-book buying likely had a major hand in the sales jump as well. Publishing houses are also telling the group that e-books have greatly increased their sales of backlog titles.

The biggest loser in publishing, not surprisingly, continues to be paper. Altogether, print book sales fell by 24.8 percent in all categories year-to-date, compared to e-books which rose by 169.4 percent. Don’t expect those print numbers to climb back up anytime soon, as they’ll have to contend with ever-cheaper e-book readers and tablets for the rest of this year.