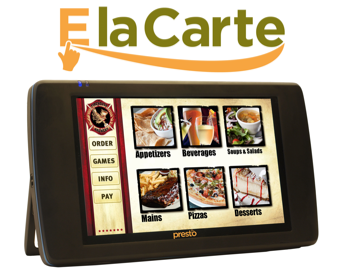 Tired of dealing with flaky waiters and other charming quirks from a night of dining out? E La Carte, a startup launching today, may have a solution to your restaurant woes with its iPad-like tablets.

Instead of waiting to be served by a waiter, you can use E La Carte’s 7-inch touchscreen tablet to view a restaurant’s menu and place an order, which gets sent directly to the kitchen to be prepared. While you’re waiting, you can use the tablet to play games, and after eating, you can browse dessert items without waiting for another menu.

When you’re ready to leave, you can swipe your credit card and checkout directly from the tablet — which provides estimates to tip your waiter, as well as assistance with splitting up the check with others.

By dealing primarily with the tablet, you avoid most of the inefficiency that stems from waiters. E La Carte founder Rajat Suri describes the current restaurant-going system as fundamentally broken, and he points out that we haven’t seen much improvement in efficiency for some time. The company’s tablet is positioned to shake up the restaurant business by making ordering easier for customers and ultimately driving more sales to restaurant owners.

Suri says that sales from restaurants using its tablet system have increased by 10 to 12 percent, primarily through impulse purchases made possible by the tablets, according to statistics from half a dozen locations over the past six months. For example, instead of flagging a waiter down for a double serving of your favorite dessert, you just need to hit a button on the tablet and it will appear on your table in a few minutes. He added that 84 percent of guests make more regular visits.

Another bonus to restaurant owners is that E La Carte’s system is easy to deploy. Suri says that they’ve worked to make sure the system is compatible with existing restaurant computers and payment solutions, and they’re able to train workers to become proficient with the tablets within a week.

Suri wouldn’t say how much the tablets would cost exactly, but it’s somewhere below $100 per unit monthly. E La Carte’s 7-inch tablet features 18-hour battery life, a ruggedized build to survive life on a restaurant table, and built-in credit card readers. The company wouldn’t say who is building the tablets, but Suri did reveal that they run Linux — which is refreshing when all we’re seeing is Android tablets these days.

E La Carte has so far deployed its tablets to more than 20 restaurants across the country, but it will be at least six months before the service opens up more widely.

The company is a Y Combinator alum and has received more than $1 million in funding from SV Angel, Dave McClure, Joshua Schachter, Roy Rodenstein, as well as the founders of Reddit, Gmail and Dropbox and executives from Applebee’s and other national chains.