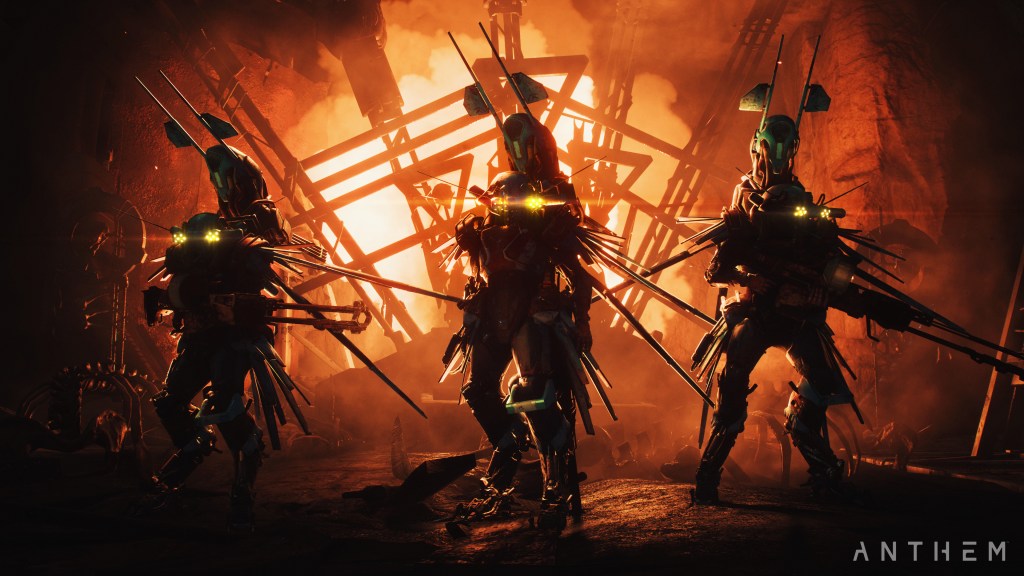 Above: Anthem: The stellar pose edition.

GamesBeat: I remember, much more so in the single-player days, the articulation was more about creating emotional stories, really pulling the player in. These days, in multiplayer co-op, I don’t know if it’s about letting players creating their own stories?

Hudson: For us, what we’re really driving toward—something we feel will be very different about Anthem is the fun of going out with friends and doing a multiplayer experience, combined with both an intimate personal story, personal engagement with your own story in the world, and also a larger narrative about the world itself. Sort of in the way that you’d have an HBO series where people come back to see what’s happening next week, or we find out what’s happening next season and you want to show up for that.

It’s really the combination of those things. The things you might expect from a multiplayer game, things you’ve seen before, but really anchoring that deeply in character experiences and relationships that make you care about the world and make you wonder what’s going to happen next. I don’t believe that’s been cracked. Certainly it hasn’t been approached in the way that, structurally, we’ve designed Anthem, so that you can actually own your private story, but still go out into a shared world.

GamesBeat: The advantage of this kind of world is that people can just keep coming back to it, I suppose?

Hudson: It’s a little bit—I see it from the other side of that window, which is—for us, building a game that’s designed to be able to receive new content and new story so that we can have an engagement loop with our fans. We find out that they really love a certain character, or they’re really curious about going to a certain part of the world. Then we can hear that and respond to it and start building story and content and features around those things.

It addresses a problem we had with previous games, where we would do that, but we’d have to either wait two years to put those things into the next game, or maybe one year or eight months to get it into some kind of significant DLC. Now we can have that volume of content, but we can respond very quickly with some initial content that teases something that comes later, and then provide something big, see how people respond to that, and have a storytelling relationship with players.

GamesBeat: It’s very different, it sounds like, embarking on this kind of game compared to what you used to do.

Hudson: That’s part of the challenge. It’s not only a new IP, but it’s a new way of structuring the experience. People have trouble categorizing it. But I do think it will be a different thing when people play it.

Hudson: One thing we’ve been super happy with is just that the closer people get to the actual game, the more they understand it and enjoy it. We’re showing it for people at the theater over there, a 20-minute video, and when people see that they get excited, but we’re also letting people have hands-on, and we find that as people play it, they quickly get a sense of how to fly and swim and do different things. With that quick mastery comes a real appreciation for what we’re trying to do with the game. We’ve been happy with that, because we haven’t really had a lot of new people try the game out hands-on until now.

GamesBeat: I don’t know if they were joking, but some people seem to want more romance in the game.

Hudson: I think the expectations from a BioWare game—Mass Effect and Dragon Age, they’re quite mature-rated storylines, things like that. That was one framework for what romances were in a BioWare game. So then the question is, are there going to be romances in Anthem? We’ve been saying no, but—the nuance is, of course we do want relationships. It’s just more in an action genre of storytelling.

Of course, like with other games, we just want to see how people respond to that, and then we can build more. You might remember, with Mass Effect, Garrus was an alien that, as we developed the story—he was a kind of birdlike concept art that we eventually pulled together and shipped that game. But we didn’t know what he would really be like and what the reaction would be. It turned out that people loved Garrus so much that they wanted romances with him, so we built that into Mass Effect 2 and people loved it. That same opportunity exists here. If people really like a character and they want to spend more time with them, want a relationship with them, that’s definitely in the cards for the future. 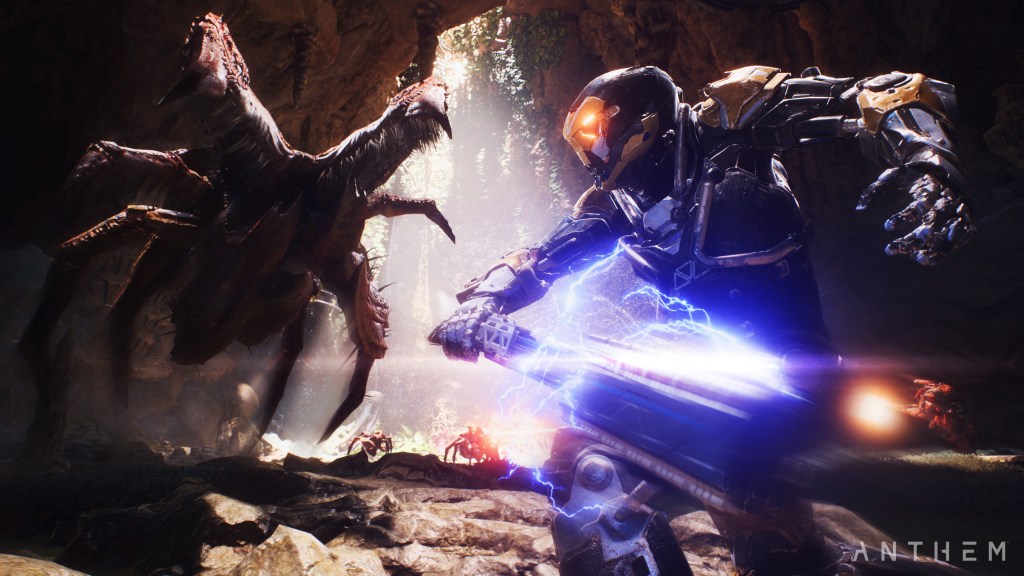 GamesBeat: Do you think of it as a continuously updated game? Or do you see it in a different way?

Hudson: I think of it as something—we try to keep as much of a sense of real time as possible. We do that through a whole spectrum of features and content, from literally almost being able to, in real time, change things like weather and creature spawning. We can say, “Oh, it’s going to get really cold this weekend, so that’s why there will be more of these creatures.” We can build some narrative around that.

That’s on the fine-tuned end. Then we come up from that to get into longer world and character arcs, bigger pieces of rich content, or new feature-oriented things like a season approach. “Here’s what’s happening in the world. Here’s why the world is changing in a way that you want to come back and see all these changes to the world itself.” That’s built into the premise of the game, this idea of a world left unfinished by the gods. It can really shift and change.

We can use that to change why you want to come back and do things you think you’ve done before, because it’s all different. We can build that into a narrative, and then by having a spectrum of content, from light to very rich, heavier content, we can weave a fabric of all of that stuff to create a narrative over time. 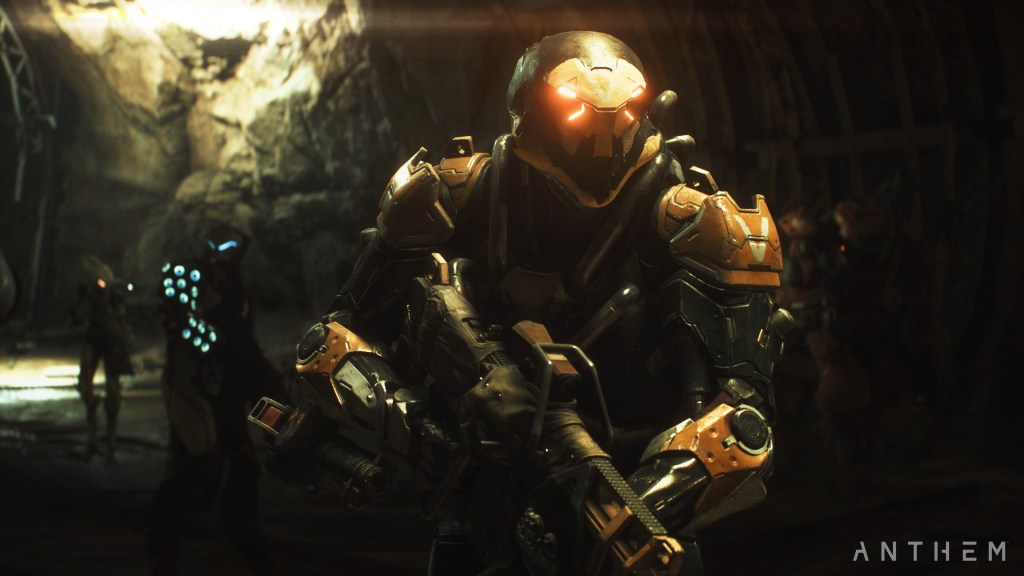 Above: That Anthem helmet looks like a bug face.

GamesBeat: Did Andromeda’s learnings somehow find their way into this game? Was there anything in particular that made you think?

Hudson: One of the big ones—there were people that wanted some specific DLC around the Quarians. We wanted to be able to do that as well, and we weren’t able to. That’s something we’ve applied directly to Anthem in that we want to be able to respond quickly to things that people want. Whether it’s something people want fixed, or even more important, when people are excited about something and we have the ability to build it, we want to be able to get that out to them. We’re designing Anthem to do that, and we’re keeping people on the project for many months. The plan is to go for years creating content to go into this game.

GamesBeat: Spectating and esports have gotten very popular now. Is there some angle along those lines that you see people engaging with in Anthem?

Hudson: We haven’t planned any esports features or events yet, but one of the fun things about seeing people play your game is you realize how good they are, how high the ceiling needs to be to allow for different skill ranges. Once we get into that world, understanding how well people are able to play the game and what they’re starting to get good at, there are opportunities to do things like that. Partly because it’s a game that’s meant to be continuously updated.