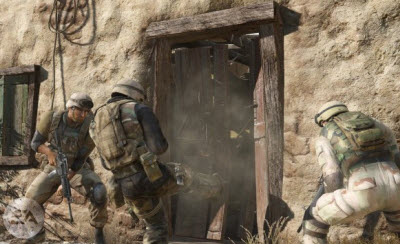 Reacting to pressure, Electronic Arts retreated from its previous stance and said it would remove the Taliban as playable multiplayer characters from its combat shooting game Medal of Honor.

The game is set in Afghanistan, and the single-player story allows the player to fight as elite American soldiers only. But in the multiplayer version, you could play either as Americans or Taliban. That upset soldiers and the families of victims of the Afghan war.

It looked like EA was going to weather the protests — which had been going on for weeks —  with its stance that every game has a good guy and a bad guy and that somebody had to play the bad guy. But it was harder to swallow that argument because the game designers prided themselves on the extreme realism in a game simulation that was set in an ongoing war where American soldiers are still being killed by Taliban fighters. Mourning family members led a crusade against the game.

It isn’t clear if this change — where EA refers to the Taliban in multiplayer as “the opposing force” — will satisfy the critics. EA isn’t changing the multiplayer game itself; it is just renaming the bad guys. EA’s Medal of Honor game is an extremely important title for the company; analysts expect it could sell around 3 million units and represent a credible threat to Activision Blizzard’s Call of Duty franchise. Medal of Honor is crucial to EA’s ongoing recovery in video games.

The publicity around the Taliban issue could be both good and bad for EA. Some notoriety helps a game. Last year’s Call of Duty: Modern Warfare 2 was heavily criticized because it allowed players to participate in a civilian massacre at an airport in Russia. But the game company went on to make only a cosmetic change to the game (allowing players to opt out of that scene) and the game went on to become the best-selling game of all time.

EA, however, has run into more determined opposition from military families. The commanding general of the Army and Air Force Exchange Services said he decided to have Medal of Honor pulled from U.S. military base retail stores worldwide. The change here is a small one, as the only thing that is different is that the multiplayer screen will have an “OpFor” name standing for “opposing force” instead of “Taliban.”

This morning, EA’s Greg Goodrich, executive producer of Medal of Honor, said the decision to drop the Taliban name was driven purely by concern expressed by the friends and families of fallen soldiers. Here is his full statement:

In the past few months, we have received feedback from all over the world regarding the multiplayer portion of Medal of Honor. We’ve received notes from gamers, active military, and friends and family of servicemen and women currently deployed overseas. The majority of this feedback has been overwhelmingly positive. For this, the Medal of Honor team is deeply appreciative.

However, we have also received feedback from friends and families of fallen soldiers who have expressed concern over the inclusion of the Taliban in the multiplayer portion of our game. This is a very important voice to the Medal of Honor team. This is a voice that has earned the right to be listened to. It is a voice that we care deeply about. Because of this, and because the heartbeat of Medal of Honor has always resided in the reverence for American and Allied soldiers, we have decided to rename the opposing team in Medal of Honor multiplayer from Taliban to Opposing Force.

While this change should not directly affect gamers, as it does not fundamentally alter the gameplay, we are making this change for the men and women serving in the military and for the families of those who have paid the ultimate sacrifice – this franchise will never willfully disrespect, intentionally or otherwise, your memory and service.

To all who serve – we appreciate you, we thank you, and we do not take you for granted. And to the Soldiers, Sailors, Airmen and Marines currently serving overseas, stay safe and come home soon.