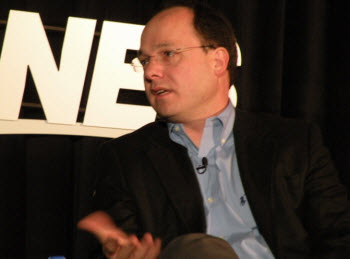 The social gaming bubble is getting bigger and it resembles all of the hype that used to envelop the mobile phone games and virtual world markets a few years ago.

So says John Schappert, the newly appointed chief operating officer at Electronic Arts. When EA agreed to buy Jamdat Mobile for $680 million in December, 2005, that was a peak moment for the mobile games bubble. Venture capitalists funded lots of mobile game startups in the hopes of getting a similar outcome, only to see the peak shift to virtual worlds as Second Life.

EA hasn’t yet made a similar move to the Jamdat deal in the social game market, but many are waiting to see if it will happen.

“Social games have attracted a lot of eyeballs,” Schappert said, speaking at the Dow Jones Newswire event in Redwood City, Calif., with Wall Street Journal staff writer Yukari Kane. “Venture money is pouring into it. Is it sustainable or is it a bubble? There are a lot of parallels to mobile. For those who say that packaged goods games (sold in retail stores) are going away, they are a little ahead of themselves.” 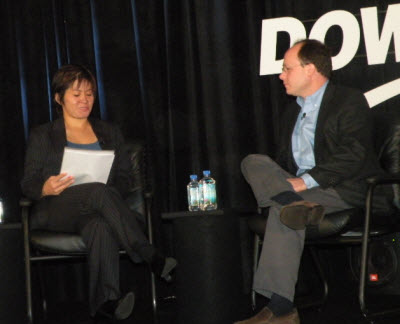 The attention is focused on social games on Facebook, even as console-focused game companies such as EA struggle to get gamers to buy $60 games during the recession. Schappert said it looks like Facebook is taking over the portal business, which is a threat to a different kind of company than EA itself. It’s more threatening, for instance, if you’re operating casual games on the Yahoo Games web site.

The question is how long will the social game phenomenon last. In a way, it resembles the hype around the Nintendo Wii, the motion-sensing game console which has been credited with expanding games to non-gamers because it is so intuitive to use. At first, rivals such as Sony suggested the excitement around the Wii was fad-like. But the Wii remains in the No. 1 spot and has sold more than 50 million units worldwide.

Similar to the Wii, there is a lot of good reason for the hype around social games. Startups such as Zynga, Playdom, and Playfish have seen huge growth in users and have hired hundreds of people — including EA veterans. When Schappert was named chief operating officer at EA in June, then-COO John Pleasants left EA to become chief executive of social game startup Playdom. Zynga launched its Cafe World social game, where you build cafes and serve good to your friends, and saw its users skyrocket to 10 million the first seven days. That’s just a fraction of the 148 million monthly active users at Zynga, which is rumored to be mulling an initial public offering. And today, the Inside Virtual Goods report predicted that virtual goods revenues — which monetize the free social games on social networks — will generate $1 billion in revenue this year.

All of that suggests that there is real growth in social games. Schappert didn’t deny that. But he said that in two years, the social game industry will mature and come back down to Earth. At that point, Schappert said that the hit games on social networks will likely be familiar brands, “not games that we’ve never heard of.”

Schappert recalled that the mobile craze created unrealistic expectations for growth. Hundreds of virtual worlds started as Linden Lab’s Second Life went through a hype cycle that included coverage in Time magazine. The mobile craze has become more real as iPhone games have taken off. And EA’s mobile division has been aggressively making iPhone games. The mobile division has also assumed responsibility for social games, and EA entered one of the popular social categories recently with its launch of Pogo Puppies on its Pogo.com casual game web site.

In some ways, Schappert’s remarks about the social gaming bubble are self-serving. If EA wants to buy any of the hot startups, it should talk them down so that the market froth dies down and it can buy for a lower price. Rumors are swirling that EA wants to buy Zynga, but that the social game company wants $1 billion. Likewise, speculation holds that Disney or other media companies want to buy EA, whose stock price has been hammered during the recession. Schappert said he couldn’t comment on those rumors and that EA is in its quarterly quiet period just before it reports financial results in the next few weeks.

EA has acknowledged that sales of NFL Madden 10, the flagship game in the EA Sports label, was disappointing this year, but that doesn’t mean the pillar of the game industry is falling apart and shifting to social networks. Schappert noted that Madden went on sale before all three console makers cut the prices on their hardware. He said the “recession proof” label for the console game industry clearly has been disproven. But he is hopeful that the hardware price cuts will help expand the core market to new users.

Schappert, who left EA to run Xbox Live and other businesses at Microsoft’s game division, said he returned to EA this summer because he got a great offer from chief executive John Riccitiello and that EA is in the midst of reinventing itself. The platforms for games are multiplying and becoming more diverse, with new platforms such as Facebook reaching people who have never played before. EA is making some of its high-quality game properties, such as Tiger Woods golf, available on all of those platforms, Schappert said.

Companies that can make the transition to doing cross-platform games are likely to be the ones that survive, Schappert said. EA is still investing in social games, digital downloads, and other online business models — spending around $150 million a year. EA has had successful launches of online versions of its golf, soccer and Battlefield 1943 and Battlefield Heroes games.

But many of the businesses are still experimental and the vast majority of EA’s revenues come from traditional game franchises and platforms. While free-to-play games, where users spend on virtual goods but play for free, are taking off in Asia, it remains to be see what will take off in the West, Schappert said.

Schappert believes single-player only games have to evolve. He said console game makers have to add multiplayer elements and downloadable additions to games that will keep a packaged-good product popular over a longer period of time.

EA itself, which cut back on its staff a year ago, doesn’t have infinite resources to pour into new platforms. EA has $2 billion in cash and it could buy startups. But with sky-high valuations for the startups, that would be more like a desperation move. Schappert thinks that companies such as Zynga are “scrappy,” but he noted that some of the startups will start to come down to Earth because they will have trouble making games for more than one platform.

“There are more platforms than ever and that means it’s more difficult to be a developer or publisher,” he said. “The good news is that the platform proliferation is bringing more users in than ever before, which is giving them more choices. We are agnostic and focus on cross platform development.”

EA’s solution is to focus on high-quality games with strong brands. Asked what he says to EA people who leave to join the startups, Schappert says, “There are still a lot of barriers for startups. There are a lot of risks.”