It’s the power of the Force. 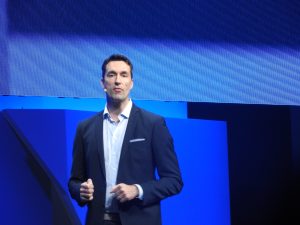 Above: Patrick Soderlund of EA.

Electronic Arts said today that Star Wars: Battlefront is the biggest launch of a Star Wars game ever, and it is also the largest digital launch in the history of EA.

Executive VP of EA Studios Patrick Söderlund said in a blog post disclosed the stats for the multiplayer-only shooter game based on EA’s Battlefield series technology and its Frostbite game engine.

“We’ve been watching all of the great moments and memories you’ve been creating with your friends. You’ve proven that Stormtroopers can actually aim, that the Millennium Falcon does indeed have it where it counts, and that the Force really is strong with Luke,” Söderlund wrote. “In just a week, you’ve already taken down more than 15 million AT-ATs. Absolutely incredible.”

He said there is more new content coming “over the next several months that will provide new ways to immerse yourself in Star Wars.”

He said that in two weeks, a new addition to Battlefront, The Battle of Jakku, launches.

“Taking place 29 years before the events of Star Wars: The Force Awakens film [coming out Dec. 18], The Battle of Jakku is a free downloadable content [DLC] pack that adds two new maps [including one for popular modes like Walker Assault and Supremacy] and a new mode to the game,” Söderlund wrote. “The coolest thing is that it’s the only place you’ll be able to experience the pivotal events that help shape the look of one of the next iconic planets in the Star Wars universe. We can’t wait for you to step onto Jakku for the first time with us.”

“We will be adding more of what you love about the game, like new maps and Star Cards, for free in the coming months, in addition to all of the content we have coming with Season Pass. We’ll have more to share soon,” Söderlund wrote.