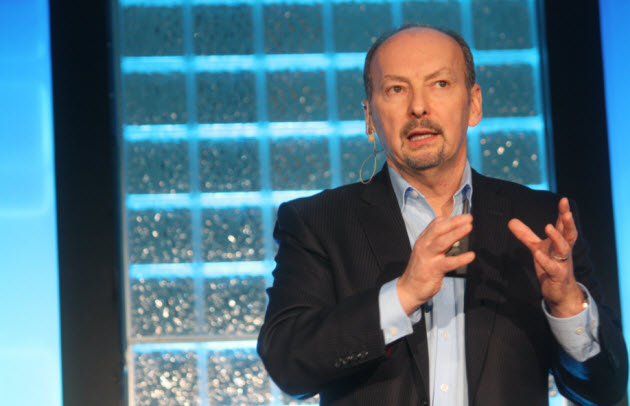 Peter Moore runs EA Sports, the huge sports game business of Electronic Arts that sells games in the tens of millions. But Moore said in a speech yesterday that EA is expanding as fast as possible into the new world of digital online games. 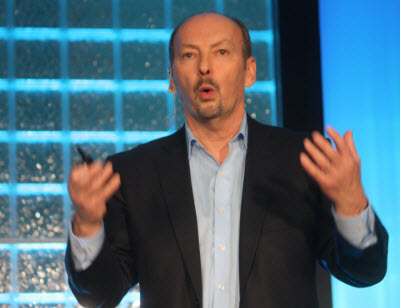 As gamers expand their numbers and move to all kinds of platforms, disruption is coming to the traditional console game makers, who must either adapt to the new world of social and mobile games or die.

“The times are a changin’,” said Moore, who tied his talk in San Francisco at the MI6 game marketing conference to the Bob Dylan song from 1964. “You better start swimming or you’ll sink like a stone.”

At EA, executives refer to the changes as Gaming 3.0, and Moore says the disruptions coming for traditional business models in the next few years will be the biggest that the video game industry has ever seen. They resemble the changes that the music industry faced with the rise of Napster and are reflected in the rapid rise of digital movie distribution companies such as Netflix.

EA’s motto has become “we unite the world through play,” and its strategy is to “build the world’s best digital playground with fun for everyone, anytime, anywhere.” The company’s aim is to stay one step ahead of the consumer and avoid the fate of music companies and others who have tried to stand in the way of change. In this new world, EA will face competition from players such as Zynga and DeNA, not just Activision Blizzard or Take-Two Interactive.

“Bob Dylan talked about change,” Moore said. “You either lead, you follow, or you get out of the way. How do we come out of this on the other side? It’s a pivotal time in our industry. What we do in the next 12 months will be integral to our success” and the continued health of the multibillion dollar video game business.

The changes can be traced to a wholesale change in consumer behavior as content shifts from packaged goods to digital forms and consumers take their games everywhere. As they do so, the number of gamers is multiplying from 250 million to 1.2 billion. Over time, EA expects that to become 3 billion gamers. 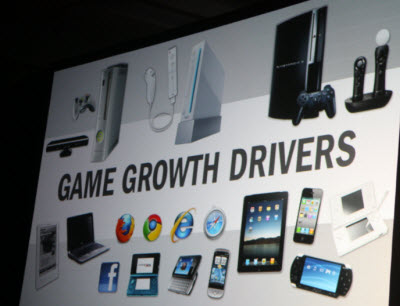 Game companies have to respond to this change with new business models, such as free-to-play, where gamers can play for free and then pay real money in small amounts for extra privileges or virtual goods. Downloadable content for console games is turning those games from products into online services that can be more frequently updated. Other options for business models include downloadable mobile, ad-based, or subscription fees. With all of those options, digital game businesses now add up to 45 percent of the total industry revenue in 2010, compared to 31 percent in 2008, Moore said.

Moore also said the simpler world of three consoles and the PC has morphed into one full of emerging platforms, including tablets, handhelds, smartphones, web sites, TV app stores, Facebook, and others. In most of the new environments, it just takes a simple click to buy a game or fire one up.

The experience across those platforms will be similar, and figuring out the middleware so that a company can publish a game across many different platforms is increasingly important to lowering costs.

“The ability to coalesce your development around one console is gone,” he said.

The music industry is a great example of standing in the way of the consumer. Music companies insisted that consumers pay $15 for a compact disc that held maybe one or two titles that the consumer wanted to hear. That was why consumers were so receptive to pirating songs on file-sharing services.

“The consumer starts a behavioral change and their demands change,” he said. “We are seeing that now with Netflix. Blockbuster Video is close to being put out of its misery. In a resistance to change, they wanted to hang on to the concept of building massively expensive retail locations.”

“This digitization of content will now hit our industry,” Moore said. “There is a battle raging and the consumer is winning. If you hang on to an old business model, you become irrelevant and go bankrupt.” 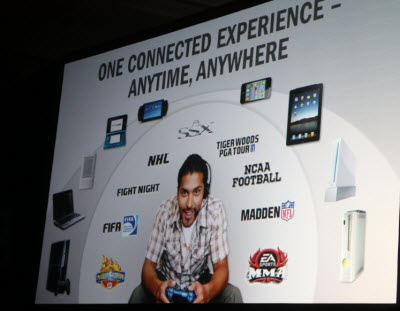 Game companies have to engage in “creative destruction,” a reference to the writings of economist Joseph Schumpeter, who predicted that one generation of innovation would displace the old one with the advance of technology. Examples of that include Netflix’s digital film distribution, Groupon’s innovations in social shopping deals, and Amazon’s shift into electronic books. He noted that Netflix only got going in 1999 but has reshaped the landscape. It now owns 60 percent of the digital movie market.

What will happen to the $60 game as free-to-play business models hit the industry? The change will be good, he said, because it will lead to an expansion in the number of gamers and a flowering of new types of content. It also helps games take off in countries where consumers can’t afford $60 games.

Like everyone else, EA is struggling with how to make money from these changes. But Moore said that EA’s position is better than everyone else’s as it is No. 1 in mobile games, No. 2 in social games on Facebook, and No. 1 in casual web games — on top of having a $3.75 billion core game business.

“We are three years into a strategy to lead in digital gaming, while our competitors have scoffed at it,” Moore said. “The old business models will be around for a while, but they are crumbling.”

EA currently offers for free the new mode of play dubbed FIFA Ultimate Team on its $60 FIFA soccer games. The mode lets users pick a fantasy dream team and then play online with those players. EA is currently giving away that game mode for free, but over time it will figure out some kind of subscription fee. More than 2.5 million players have played that game mode, and they have played more than 100 million games — all for free, or no added cost on top of the $60 game.

If EA can get $2 to $5 out of online game play — in addition to the $60 per game — that could be a huge financial victory because digital delivery of games is a lot cheaper than physical delivery. It could prolong the life of a game and turn it into a service. But the question is whether EA will still be able to charge $60 per premium game.

Still, with threat comes opportunity. The online world is giving EA new options. It dropped out of the baseball game business on the consoles, but now it has found a way to move back into the sport through online games. EA has a direct relationship with more than 230 million gamers who have paid with a credit card for some kind of digital game or service. The number of online game sessions in FIFA soccer 11 is up 66 percent from a year ago, and EA currently has 3.5 million gamers playing its Facebook version of FIFA.

Going forward, Moore said, “Every game now has to be socially engaging.”

The ultimate nirvana will be when the $60 price melts away and consumers start paying a continuous subscription fee for games that are regularly updated online. EA will be able to reward consumers for playing multiple games and link its games together.

“That is the future,” he said. Today, we envision this as a connected experience, anytime, anywhere, where the consumer is in control.”

It’s no accident that EA chose to let the public vote on who will be the cover athlete on its Madden NFL football game’s plastic case.

“We decided this year the consumer gets control,” Moore said.

And one day, there won’t be a plastic case.