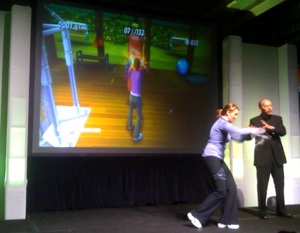 Despite being a major cash cow for video game giant Electronic Arts, the company’s sports division faces some big challenges, EA Sports President Peter Moore said at the MI6 games conference today in San Francisco. It’s no secret that EA is looking to compete with Nintendo’s popular Wii Fit game with its upcoming EA Sports Active release for the Wii. (For more on Sports Active, see VentureBeat writer Dean Takahashi’s write-up from last month.) Moore took the opportunity to speak broadly about the changing landscape of sports video games and how EA plans to adapt.

The biggest change, of course, is the emergence of what Moore called “lifestyle sports” games. Wii Fit, where players use the Wii remote control to exercise while playing sports video games, is the most prominent example. But Moore identified Dance Dance Revolution, Guitar Hero, and Rock Band as part of a similar trend of games that make gamers “out of people who would never have considered themselves a gamer two or three years ago.”

The core audience that supports EA franchises like FIFA (soccer) and Madden (football) remains a $1 billion business, but the new, more casual audience is quickly becoming just as large, Moore said. And that’s an audience EA is still figuring out how to reach, with the help of a new marketing team.

“They say that if it makes you feel uncomfortable, it’s innovative,” Moore said. “[EA Sports Active] makes us feel very uncomfortable. We drip with testosterone. We are all about male-fueled angst, agony, delight in sport.” Whereas the average player of EA Sports Active will “probably be a woman, 35, with two kids at home,” who wants to stay fit, Moore said.

EA Sports Active will be customizable, both in the type of sports you play and the intensity of the workout, and it will include a stretch band as well as a tool for attaching part of the Wii remote to your leg (so it can track the movement of your whole body). But why would someone play this instead of Wii Fit? Moore compared the difference between the two products to that between eastern (Wii) and western (EA) fitness. Whereas Wii Fit emphasizes things like proper form and balance, EA Sports Active will “make sure you actually risk breaking into a sweat.”

As EA tries to reach a new audience, it has to keep its hold on the old one, Moore said. The company’s plan to capture both groups can be broken down into five overall strategies: Capture the core, expand the brand, globalize, captivate the masses, and digitize. Globalizing and digitizing (i.e., delivering online content) seemed to present the biggest changes and opportunities for the company. On the digitizing side, EA is working to keep its games fresh with online content, such as the “dynamic DNA” feature, which changes the attributes of the professional athletes in each game to reflect new data. These two strategies work together, too, since delivering free, online games may be the only way to reach gamers in Asian countries.

“The consumer in Asia has long ago turned their back on discs,” Moore said. Despite that, he said he’s confident that EA can reach this global audience, because “sports is the universal language.”

Here’s a Q&A we did with Moore last month that offers more details about specific games.