Ken Moss, chief technology officer at EA, revealed the technology in a Medium blog post, just as EA stock sits at an 18-month low. Moss said Project Atlas is the work of 1,000 EA employees, and it is a “transformative” technology that integrates a game engine and services into a single development platform.

“I’m excited to share some of what we’ve been working on that is going to change how future games are made,” Moss said. “Our industry has come a long way since I was a kid. But looking ahead to the next few years, I strongly believe that what’s on the horizon will bring greater changes than anything gaming has ever seen.”

At EA, Moss said the company sees a future in which “games go even further beyond the immersive experiences players enjoy today.”

He said, “I’m talking about games that offer living, breathing worlds that constantly evolve. You’ll play them one day, and when you come back the next, things have changed based on inputs from other players, AI, and even the real world. These new experiences will lead to deep, meaningful social interactions. The games you play, the characters you create, and the experiences you have together will create shared ground for friendships that span the globe. I believe this is a future where games become the most compelling form of entertainment. You will be able to play games with your friends anytime, anywhere, and on any device.”

He added, “Up until now, what I’m describing has been possible in nascent, fragmented ways. But we’re at an inflection point where major, complementary tech disruptors are falling into place. As an industry, we’ve made remarkable technological advancements in [artificial intelligence], cloud, distributed computing, social features, and engines. But because all of these technologies have continued to evolve separately, it’s been difficult to conceptualize what we could achieve by bringing them together. That’s about to change. Technological disruptors  —  when brought together in a complementary way — will result in a truly profound unlock for game creators.”

Project Atlas is designed from the core to “harness the massive power of cloud computing and artificial intelligence and putting it into the hands of game makers in a powerful, easy to use, one-stop experience,” Moss said.

The game engine controls the “fundamentals” of the game with things like rendering, game logic, physics, animation, audio, and a tools for creating the game. Layered on it are services like secure player identity and authentication, player matchmaking and achievements, and social communications with friends that truly bring the game to life — all supported by common data management and game and service hosting. 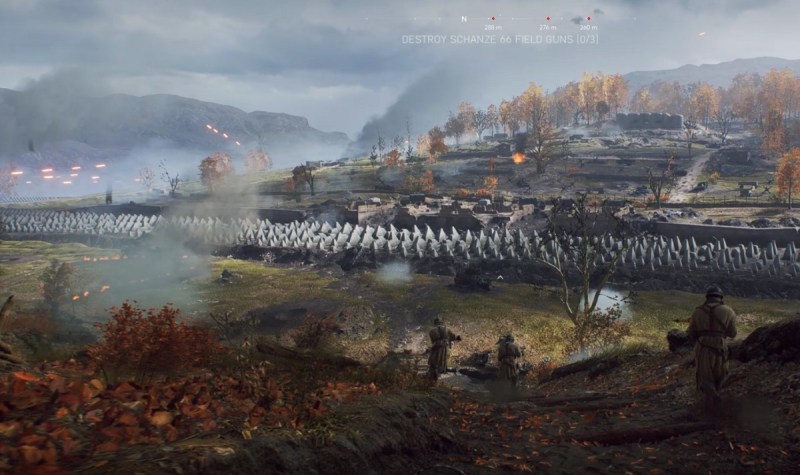 Above: A frightening fortification to take over in Tirailleur in Battlefield V.

EA’s Frostbite Engine is one of the few major in-house engines that can handle demanding games like Battlefield, FIFA, Madden, Dragon Age, Need for Speed, and the upcoming Anthem. EA has been driving toward ever greater realism with Frostbite, with the goal of delivering lifelike environments to gamers like wind-blown grass, physically accurate destruction, and realistic humans with accurate lighting.

Meanwhile, gamers are asking for more personalized entertainment, consumed how and when they want, with more opportunities to collaboratively interact with content. Gaming services are evolving to extend those experiences across games, and across more devices, creating exciting new opportunities for social play, Moss said.

Gamers need “deep social capabilities, from structures such as friends and groups, to relationships and social graphs, and the communications between them.” It takes the cloud, or a global network of servers, to deliver this to gamers.

“When we talk about cloud gaming, we’re referring to a game that resides on an EA server rather than on the gamer’s PC or mobile device,” Moss said. “The gamer enters the game by installing a thin client that can access EA’s servers where the games are running. We’ve been developing software that utilizes the cloud to remotely process and stream blockbuster, multiplayer HD games with the lowest possible latency, and also to unlock even more possibilities for dynamic social and cross-platform play. Beyond that, we’re investing in cloud gaming to enable deeper personalization, and to eventually create a world full of user-generated content — blurring the lines between the discrete domains of game engines and game services. In fact, it is the merging of these two formerly distinct domains, along with the paradigm of cloud gaming, that is a key driver of the next-generation unified platform from EA.”

Meanwhile, Moss said that AI is getting better, enabling deep personalization of in-game agents on a large scale. So non-player characters (NPC) will add to the realism, rather than ruin it. 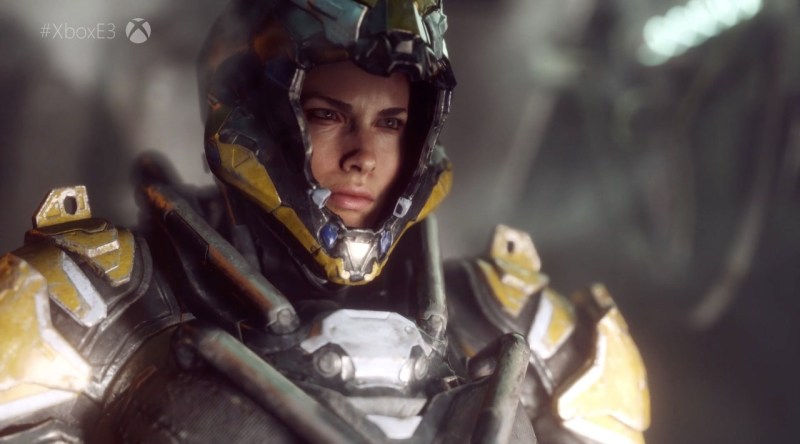 Above: Casey Hudson wants you to know that he remembers the tired faces of Mass Effect: Andromeda.

“Another use of AI is truly profound — to have computers assist creators in some of the most artistic of human endeavors — making art. We are today innovating with AI to write and perform original music in a way that is truly relevant and personalized to every moment of gameplay,” Moss said. “Imagine a world where a huge and talented virtual orchestra is behind every game, and new and unique scores get written depending on the current scene you are playing. Each environment may have its own musical motif, which gets merged with the motifs of enemies or allies who may be present. In addition, imagine that as the action gets more intense — the pace of the music picks up to match. Music is truly one of the strongest ways to evoke powerful emotions that make gameplay even more immersive. Beyond music come other forms of art, including character behavior and even raw story telling. I can’t wait to see what amazing studios like BioWare do when the legendary story tellers at their studio are paired with the power of AI to create even richer, unique, and personalized stories for the world at large.”

EA is integrating all of these elements into Project Atlas, which is being designed to seamlessly converge EA’s Frostbite game engine and game services as well as AI into a game development platform that is optimized for the cloud.

“This will be a fully integrated platform, capable of building the scalable, social, and large-scale experiences of the future,” Moss said. “So, while in the past, features like cloud hosting, matchmaking, marketplace, data, AI, achievements, and social were separate from the development tools in the engine, the Project Atlas platform will be able to implement all of these services natively within a unified solution.”

“The cloud distribution of engine services will free the game engine from the processing constraints of any single computing device, bringing more possibilities for deep personalization,” Moss said. “A world full of user generated content will be possible with the growing ubiquity of cloud computing. As these begin to take shape, what’s actually happening is that they are blurring the line between engine and services. The two formerly distinct worlds of engine and services are merging, and what is emerging is the need for a next-generation unified platform.”

Moss said that big open worlds are outrunning the capability of human artists to keep up with task of creating assets.

“With Project Atlas, we are starting to put the power of AI in the creative’s hands,” he said. “In one example, we are using high-quality LIDAR data about real mountain ranges, passing that data through a deep neural network trained to create terrain-building algorithms, and then creating an algorithm which will be available within the platform’s development toolbox. With this AI-assisted terrain generation, designers will within seconds generate not just a single mountain, but a series of mountains and all the surrounding environment with the realism of the real-world.”

And with Project Atlas, EA is working to optimize cloud distribution of engine services to process the rendering, physics, and simulation of a game instead of being entirely constrained to the specs of a single client-side computing device.

“With Project Atlas, which is cloud native, we’ll have the ability to break from the limitations of individual systems,” Moss said. “Previously, any simulation or rendering of in-game action were either limited to the processing performance of the player’s console or PC, or to a single server that interacted with your system. By harnessing the power of the cloud, players can tap into a network of many servers, dedicated to computing complex tasks, working in tandem with their own devices, to deliver things like hyper-realistic destruction within new HD games, that is virtually indistinguishable from real life — we’re working to deploy that level of gaming immersion on every device.”

In games of the future, thousands of players will be able to compete on a single map that is hundreds of thousand of kilometers wide. Today’s maps — like with battle royale games — top out at around 100 players. These games will also shift more of the ability to create to the players. EA also wants the network-enabled game to be secure, preserve user privacy, and handle data in a smart way. Moss acknowledged some of what he’s talking about already exists.

“Right now some of these capabilities exist separately, but are too hard to use, and have to be manually connected and configured as each new capability emerges. That creates a huge set of opportunities,” Moss said. “The opportunity cost can be seen in creative discovery, quality of games, and innovation. This hits especially close to home for smaller and indie developers where human capital is finite. If you’re investing time and effort in one aspect of development, you’re taking away from something else.”

He added, “With an integrated platform that delivers consistency and seamless delivery from the game, game makers will free up time, brain space, and energy for the creative pursuit. This means more capacity to discover the next great thing. Games aren’t just another piece of software. This is about empowering game makers to focus on what matters most — the creativity, the artistry, and the fun.”

Moss did not say when Project Atlas will be fully deployed and functional.