VCs are getting serious about space-related startups, and there are some truly exponential growth opportunities in the SpaceTech ecosystem.

But the majority of money that went into SpaceTech last year was in just two deals — a $1 billion fundraise for SpaceX and a $500 million raise for OneWeb. If you ignore those as outliers, SpaceTech funding in 2015 was only around $300 million. Not so epic.

The segment of startups seeing the most VC attention is the earth observation (EO) segment. Companies building earth observation (EO) satellite constellations (basically, cameras put into orbit and photographing the Earth on a regular basis) pulled in more than half the SpaceTech funding from 2012 to 2015 and 72% in 2015. Moreover, the only exit in SpaceTech until now – Skybox Imaging (recently renamed Terra Bella), which Google acquired in 2014 for $500 million – is also an EO company.

All of this makes earth observation the main investment thesis among space-related VCs at the moment. 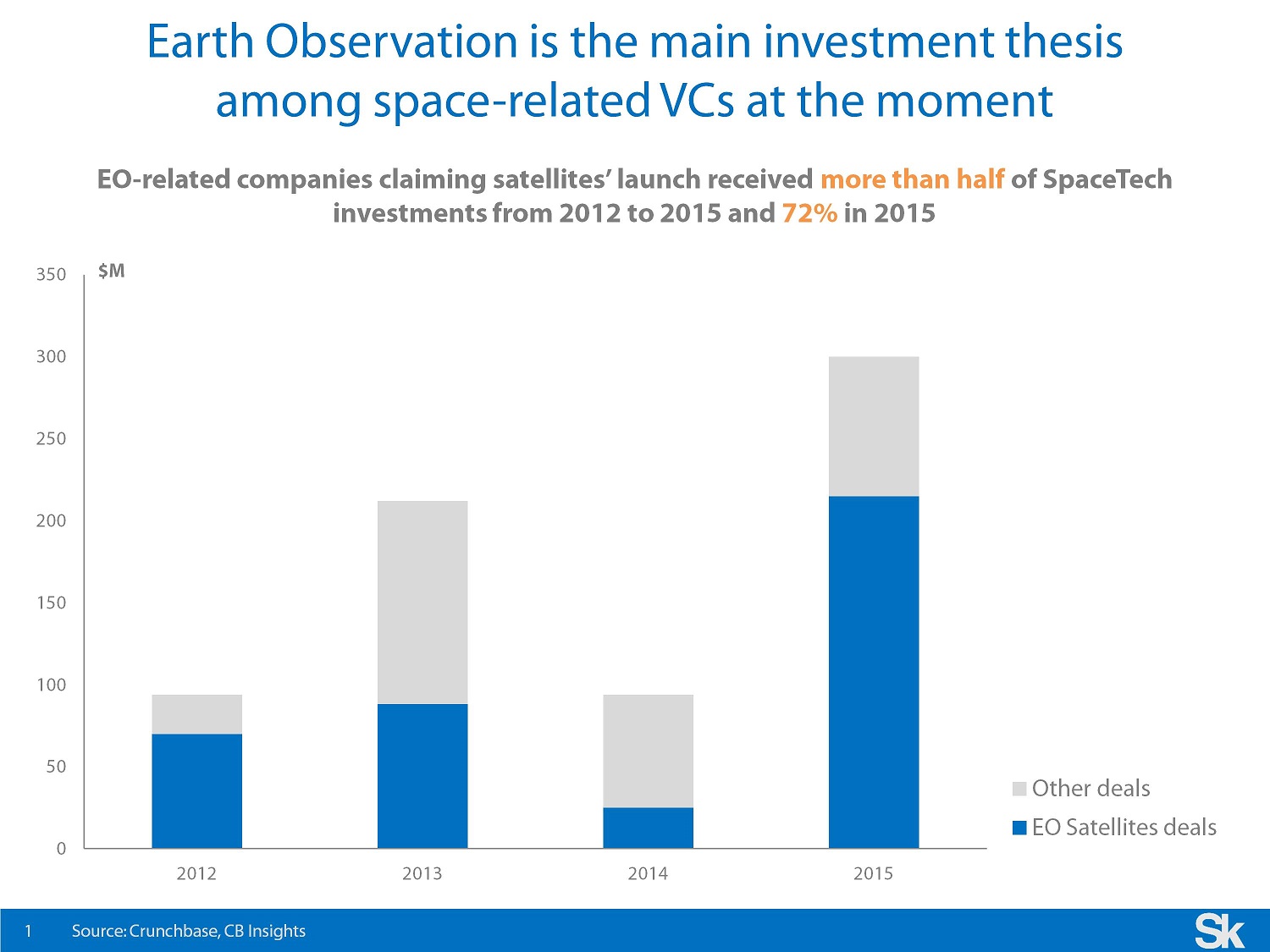 If we look at 2016, Planetary Resources, a startup developing asteroid mining technology in the long-term but deploying EO satellites with unique capabilities (more on this in a minute) this year, raised a $21 million Series A from OS Fund, Grishin Robotics, Space Angels Network, and Larry Page, among others.

Given the focused VC investments in EO satellite developers and significantly decreased costs to build and launch a satellite, many tech startups are now trying to jump into this space. 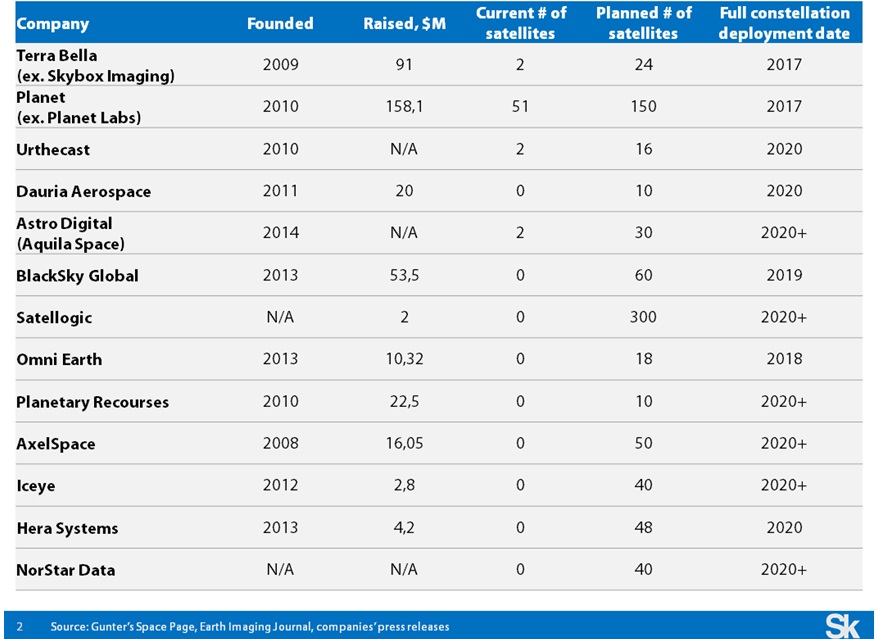 As you can see in the above table, quite a lot of EO startups have emerged in recent years.

But the segment is being built on rather shaky ground.

Historically, the key customers for remote sensing data have been defense and intelligence. And that’s still the case. Around 65% of the $1,6 billion EO data purchases in 2015 were made by defense/intelligence agencies all over the world. These types of clients make for a really complex sales process — especially for startups. Moreover, getting “military-grade” satellite imagery requires building and operating multimillion dollar satellites, which is, obviously, not affordable for VC-funded startups.

The bottom line is that there are, at the moment, 13 companies (pretty difficult to differentiate in some cases) competing for an earth observation data market opportunity worth less than a billion dollars. That’s a crowded market, and we can expect to see a lot of these companies fail.

Still, despite the obvious issues, there are actually some good growth opportunities in the EO space:

Unique datasets
While most of the companies listed in the table above are gathering imagery in the visible spectrum (say, taking RGB photos of Earth) — mostly to support agricultural applications, which has been the biggest bet so far — some have different sensors on their satellites that are capable of gathering unique data from space that can provide specific insights for other verticals such as mining and energy. The most interesting companies out there providing such capabilities are Planetary Recourses (hyperspectral imagery) and Iceye (radar imagery).

Valery Komissarova (no relation of mine), business development director at hardware VC firm Grishin Robotics, which has funding both Spire and Planetary Resources, says what’s exciting about Planetary Resources is that “it’s not just mapping and visual observation — it’s quantitative analysis of the planet’s surface. And analysis (in addition to collection) is a very important word here.”

Above: Iceye markets its satellites for applications as diverse as monitoring illegal fishing to aiding real-time disaster-relief to mapping resources on other planets.

Satellite imagery analytics
According to SpaceWorks and Euroconsult, more than 500 EO satellites will be launched yearly after 2020. And these satellites will deliver huge amounts of geospatial data. However, it is still unclear how that data will be used and how to make a transition from pixels to insights. So there is a lot of opportunity in tackling those questions.

Some companies have already emerged in this area — Orbital Insight, Spaceknow, and Descartes Labs, to name a few. They are doing things like predicting retailer profits by counting the number of cars in store parking lots, and monitoring construction and manufacturing rates in China. This is only the tip of the iceberg, and the full multibillion-dollar potential of geospatial big data is only just being unlocked. 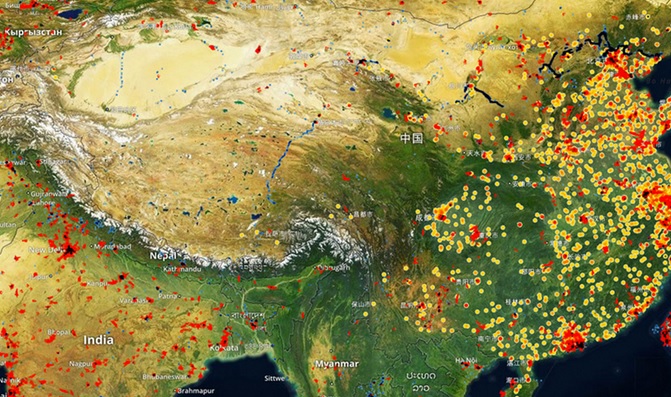 However, there is a lot of work to do for these startups to gain significant traction. Their target customers — hedge funds, traders, and government institutions — mean complex sales. Shahin Farshchi, Partner at Lux Capital, an investor in Planet, Orbital Insight, and Cape Analytics, told me, “Many of these startups [that are applying AI to satellite and aerial imagery] generate interesting signals from pixels but haven’t yet established themselves as part of their customers’ decision-making processes. Startups should expect to do lots of hand-holding with their customers early on.” 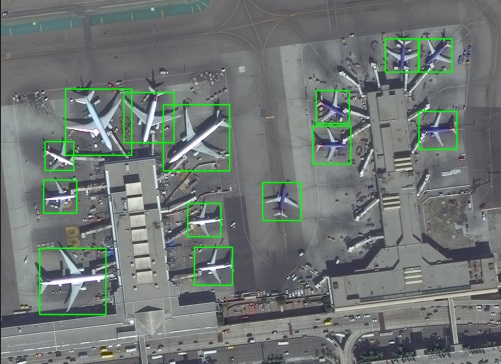 Above: OrbitalInsight identifies airplanes at an airport.

Summing up, the EO sector has significant potential for exponential growth, and a number of companies will provide returns to their investors. “Not everybody who promises satellites today will be actually able to launch and scale viable constellations — so the actual amount of data on the market in the next 3-5 year is still to be seen,” Komissarova told me. “In addition, an overall increase in the quantity and quality of data will easily open up new markets that could not afford satellite imagery today — i.e. the overall pie will grow”.

Additionally, we’ll see brand new applications for satellite imagery emerge (in the mid-term)  that haven’t even been thought of yet. So, in the short-term, we can expect to see platforms and APIs for analyzing satellite imagery and integrating it into a variety of apps – which means we’ll see business models that look a lot like those of “normal” tech startups. To quote Sunil Nagaraj, VP at Bessemer Venture Partners, “Space companies are starting to look like tech companies, and that’s huge.”

All of this makes earth observation a great investment opportunity. SpaceTech is not all about that “rocket science” thing.