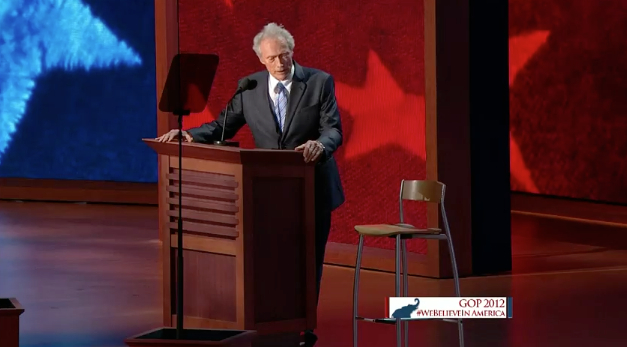 Not-so-surprise speaker Clint Eastwood gave a strange address at the Republican National Convention on Thursday night in which he spent much of the time talking to an empty chair that was supposed to symbolize President Barack Obama.

Seeing a meme in the making, Twitter accounts have popped up poking fun at Eastwood’s odd theatrical performance — one of which, @InvisibleObama, has gathered more than 20,000 followers in around 43 minutes. (Sorry, @ClintsChair. You made a noble effort.)

When Mitt Romney says "Mr. Chairman", do you think he's referring to me?

So, Mr. President, how do you handle promises that you have made when you were running for election, and how do you handle them? I mean, what do you say to people?  Do you just — you know — I know — people were wondering — you don’t — handle that OK. Well, I know even people in your own party were very disappointed when you didn’t close Gitmo.  And I thought, well closing Gitmo — why close that, we spent so much money on it.  But, I thought maybe as an excuse — what do you mean shut up?

The explosive growth of the @InvisibleObama Twitter account further proves that nothing escapes the Internet’s love of awkward public failures. Eastwood’s speech had all the makings of the perfect meme: It was unexpected, completely organic, and judging from the response on social media tonight, it will likely end up being the most widely remembered speech tonight.

Screencap via That is awesome