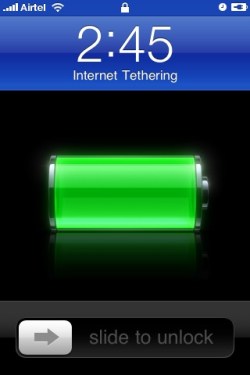 If you’ve got an iPhone and an Apple laptop, it’s possible to configure the iPhone as a cellular modem for your notebook in a few seconds.

The original problem is that AT&T has not enabled the default means of “tethering” the phone to the laptop. But there’s a workround: Fast Company blogger Chris Dannen has posted step-by-step instructions, culled from other sites, to set up tethering yourself. Australian blogger Benjamin Miller figured out the fix, but Dannen’s page rolls up other info, screenshots and video about it.

iPhone owners eager to try out tethering may wonder: Will AT&T ban them, or maybe bill them? PC Magazine writer Chloe Albanesius talked to an AT&T spokesman who refused to say whether or not AT&T disapproved of the setup, or whether the company would retaliate against users who tethered their iPhones. For now, early adopters are taking this non-condemnation as tacit approval.

In addition to Dannen’s instructions linked to above, there’s a demo video, below, by another iPhone user. He claims, “I have concluded that AT&T is not charging for tethering, because we pay for unlimited data.”

I asked VentureBeat readers to email me if they’re actually using this setup. One wrote:

“I’ve been using it for about a month and I’ve got to say, it’s pretty damn good (when AT&T coverage is good). It’s fast enough for 99% of the stuff I do when on the road and always replaces the need to pay for a wifi pass. I find it better plugged in than over Bluetooth just cause it’s easier to activate and I think a bit faster.”

“Been doing tethering for a couple months – works great. In San Francisco, my personal experience is that my iPhone tether (through Bluetooth) is faster than my Sprint card – especially for streaming – though they are in shouting distance of one another.”