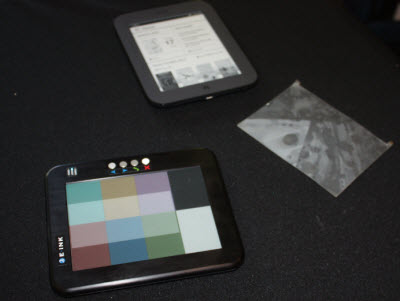 Displays for e-book readers are in such high demand that its tripling every year, according to E Ink Holdings chief marketing officer Sriram Peruvemba.

Speaking at the Emerging Display Technologies conference in San Jose, Calif., Peruvemba said that overall demand for E Ink displays — the black and white displays used in electronic book readers such as the Amazon Kindle — could hit 25 million to 30 million units this year. Display Search, a market research firm that is putting on the conference, estimates that e-book display demand could hit around 27 million units this year. That’s about three times the number sold in 2010. It shows that e-book reader sales are holding on to a slice of the portable market, despite challenges from Apple’s iPad tablet computer.

“This technology has already emerged and it is in the mass market,” Peruvemba said.

The competition between e-book readers and Apple’s tablet is a familiar one. It’s like using a specific-purpose device, or using something like a Swiss Army knife. So far, the e-book reader has survived because it has done a better job of providing an electronic reading experience to consumers.

Due to the popularity of the Kindle, e-book reader sales have tripled every year since 2006. That’s a lot of progress for a new kind of display, dubbed an ePaper display, that debuted with the sale of about 100,000 units in 2006. Last year, E Ink Holdings generated $650 million in sales, and this year it expects to surpass $1 billion in revenue, Peruvemba (pictured below) said. 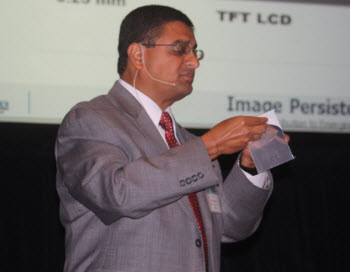 The screens used in the E Ink displays are much diferent from liquid crystal displays that are used in laptops and tablets. When you’re staring at the screen and reading a book, the display doesn’t use any power. But it’s slower than an LCD and takes a split second to turn the page. You don’t use these black-and-white screens to watch a video, but you can easily read and glance at black-and-white images.

As a company, E Ink was founded in 1997 and it was purchased by Prime View International in 2009.

The E Ink (short for electrophoretic ink)  screens are pretty simple, consisting of black or white capsules that are suspended in an oil. If you run a voltage through the oil, it can float the black capsules to the surface so that you see something dark. Or you can float the white capsules to the top. The effect is to change the screen to white or black as needed. The displays are low cost, highly reliable, and easy to read in the sunlight, in contrast to LCDs. In 2010, E Ink introduced a color display.

The introduction of the iPad has had a big impact on the market for e-book readers in one respect. Amazon has driven the costs out of the readers and brought down the prices for e-book readers very quickly. The e-book are far less than the $499-plus iPad 2 tablets, with models reaching as low as $99.

At the same time, Samsung’s Liquavista division has introduced a new kind of “electrowetting” display, which creates images based on whether water is repelled or attracted from a surface. These displays can display 16 million colors and can play video, allowing e-book entrants such as Barnes & Noble to launch the color-based e-book reader, the Nook.

The threat from the iPad has forced Amazon to consider launching its own tablet computer. Many analysts expect Amazon to enter the tablet market shortly. Right now, about 12 percent of the population has an e-book reader, compared to 8 percent for the tablets and 83 percent for a cell phone. Each of those devices can be used to read books.

Peruvemba says he thinks there are wider applications for the E Ink displays in things like digital watches, cell phones, smart cards, universal serial bus devices, and even perfume bottles. In fact, E Ink displays have been used in all those devices on a relatively small scale. Some creative uses include a flexible mileage display that goes on the top of a bike’s handle bars and another is a electronic music stand that can display different kinds of music. Peruvemba thinks that e-books will soon disrupt one of the biggest paper book markets: paper textbooks in schools.

In its history, E Ink raised $150 million and it will exceed $1 billion in revenue. By comparison, makers of organic light emitting displays have spent perhaps $30 billion and have yet to make a return on that investment. That’s the nature of the display business. E Ink estimates it is the most profitable company in displays. It helps to have a novel idea.