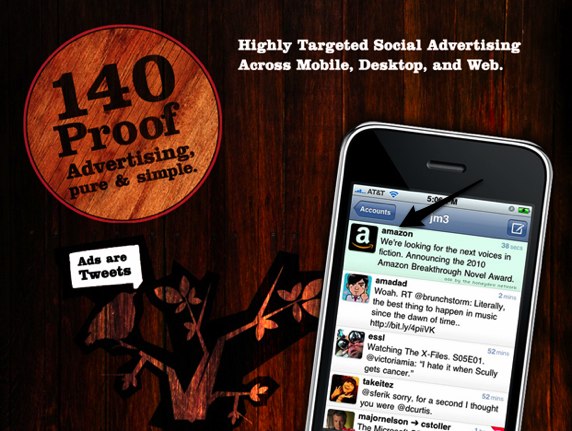 The two companies you’d think would be most devastated by Twitter’s recent acquisition of Tweetie and its advertising launch say they’re not fazed.

140Proof, an ad network that serves sponsored tweets in user’s streams, has teamed up with Echofon, which builds apps for reading tweets on the iPhone and in Firefox. The partnership will provide a free, ad-supported alternative to the paid Echofon app, which usually costs $20.

The partnership flies in the face of Twitter’s recent moves. The microblogging network effectively lit a fire beneath its developer ecosystem this week after it purchased the maker of Tweetie, a popular iPhone app and finally launched its long-awaited advertising network. The Tweetie acquisition is expected to put competing iPhone apps out of business, and the new ad network could crowd out other companies looking to cash in on Twitter’s network.

140Proof and Echofon would be among the most severely impacted by these recent moves, but 140Proof founder John Manoogian said he’s not worried, even if Twitter’s new ad system places sponsored tweets atop search results. “We love it,” he said. It’s “huge validation and legitimization of the platform for brands.”

Manoogian said there’s lots of room for a variety of advertising providers in Twitter’s ecosystem. Indeed, Twitter chief operating officer Dick Costolo said earlier today that the company wouldn’t ban other companies from serving ads on third-party Twitter apps. However, he warned that if third-party ad providers started harming the overall user experience, the company might crack down.

While Twitter’s ad network is only in beta on search results right now, Manoogian said 140Proof is already available on multiple mobile platforms and browsers, adding that the company is serving 25 ad impressions a second.

He said that while Twitter’s ad network is focused on large brand advertisers, 140Proof caters to the “long tail” of advertisers and 70,000 Twitter developers. He said the company added 800 new advertisers last quarter.

140Proof also analyzes a Twitter user’s persona based on their public tweets and who they follow. It then targets ads based on that data — so if I tweet about coffee quite a bit, I should receive more ads about coffee shops and brands.

While the company has a search application programming interface, it primarily focuses on serving ads in the stream, which can drive further search traffic about a brand. It’s also a move Twitter says it will ultimately make.

“We see search and the stream as symbiotic for advertisers, depending on where they are in the customer engagement cycle,” he said.

These advantages are all well and good. But if Twitter’s trial turns out successfully and it starts building a self-serve system, 140Proof will need to keep innovating to stay ahead of the curve.