Education technology is a red-hot market, and both startups and investors are taking note.

A typical student will spend 13 years in the classroom before graduating high school, and American taxpayers invested more than $536 billion on K-12 education during the 2005-2006 school year, according to the Department of Education.  At this rate, roughly $7 trillion dollars will be spent on a public primary education by the time today’s kindergarteners receive their high school diplomas in 2024. And that’s not accounting for inflation. 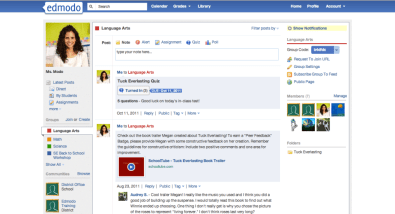 Edmodo is a free tool that allows teachers to create and maintain a private social network for their classroom. It’s available to students and teachers on PCs and any wireless device, such as a smartphone, or an iPod Touch. Edmodo can be used to share educational content, manage projects and assignments, handle notifications, conduct quizzes and create collaborative learning experiences that live long after the school day has ended. The company dubs the experience the “educational graph,” which closely tracks the Facebook’s “social graph.”

Edmodo was founded in September 2008 and has grown to more than 5 million users in the past year — a tenfold increase from just one year ago.

“This is a really exciting time in the education space, with more and more classrooms having access to the Internet,” Edmodo co-founder and chief executive officer Nic Borg told VentureBeat. “We’re excited to be bringing cloud technologies to the classroom.” At a private event with Hoffman, Borg told a group of reporters that more schools were equipped with Wi-Fi in 2010 than in the previous five years combined.

Edmodo recently demonstrated the scale and flexibility of its educational technology, teaching students about polar bears through a live video stream. In collaboration with Polar Bears International, Edmodo sent five researchers to the tundra to host a series of three live, interactive webcasts that were viewed by students in 1,700 classrooms in 40 different countries, and 48 states in the U.S.

Edmodo will remain free for teachers and students to use, Borg stressed. Ultimately the company has its sights set beyond the classroom. The company wants to be the Salesforce for Edtech, Borg said, and move school districts’ legacy information technology to the cloud. Edmodo hopes to  save school districts money and eliminate the hassles of maintaining legacy IT by selling “premium services,” and replicating these information systems with a cloud-based software as a service (SaaS) model.

Each year $40-$50 billion in K-12 education is spent on non-salary expenses, Borg says. Part of this goes to maintain computer systems to handle functions such as grading, attendance and other academic record-keeping. Typically IT procurement for schools is done at a district-wide level. But because millions of students are already using free Edmodo classroom software, the company has  injected itself into school districts from coast-to-coast, avoiding the need for lengthy approvals. How’s that for viral marketing?

Edmodo is based in San Mateo, CA, and currently has 35 employees. Hoffman is a previous investor in the company, and Edmodo has received previous funding from Union Square Ventures and Learn Capital.