Friday, October 20th, 2000 was not a great day for Mariam Naficy. Eve.com, her high-flying beauty products company, faced the implosion of the dot-coms and an over-stretched budget and shut down, firing 164 people and liquidating its assets. The collapse also helped Idealab, the incubator that had acquired Eve.com only a few months before, march a few more steps towards its precipitous decline .

But Naficy is back with Minted, selling premium stationery instead of high-end lipstick and skin cream, and she’s raised $2.5 million in seed funding to do it. While there are a number of sites selling stationery, almost all of the over $9 billion spent annually in personal stationery is spent offline, and no outlet yet dominates the internet. There are some, like FineStationery, that offer fancy paper from big-name fashion brands, but Minted has a slightly different goal. It wants to find and promote independent designers and let its customers choose the best ones.

Minted has been seeded with well-respected independent brands, most of which have signed exclusive contracts, but its marketplace is, in theory, open to all. The company will hold competitions built around specific types of stationery — wedding or bridal shower invitations, holiday cards, etc — and accept submissions from anyone. The submissions get pared down to a couple of hundred and then winners are chosen by popular vote. The winning stationery later goes up for sale on the site, along with a section featuring the designer. 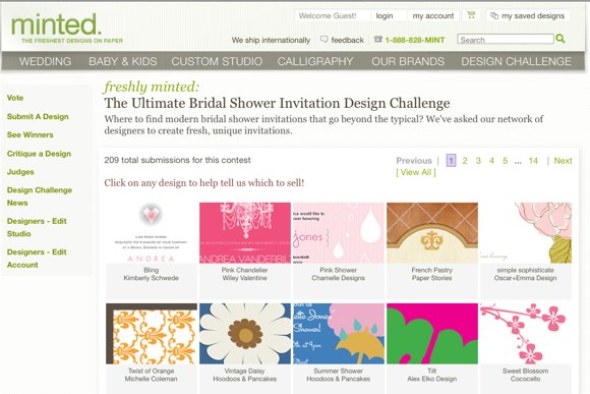 After that, Minted handles all of the promotion, printing costs, shipping, customization and customer service and the designer gets five percent of the retail revenue. Considering that the going rate is four to six percent of wholesale, this is a relatively solid deal.

It’s not bad for Minted, either. By finding designs through contests and only printing to order, the company is significantly reducing the risk it takes on every design. The typical price for most stationery is around $175 for 100 cards. The hand-crafted stuff goes for $700-800, but that comes from the professional independent designers.

The funding comes from a number of angel investors, including the founders of WetPaint, ePinions, and eToys and the Chairman of The Body Shop International.

[Updated: The original post said that Eve.com withdrew its IPO. It was Idealab]