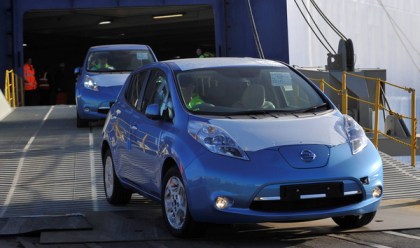 Less than a fifth of electric car buyers listed the price tag of an electric car as the most important factor when deciding to make the purchase, according to a new report by management consulting firm Accenture.

Most of the concerns for electric car buyers center around how long it takes to charge the car and how far it is able to drive, according to the report. Electric cars are typically limited in how far they will go on a charge, and they can take a long time to recharge. It can take up to 5 hours for some vehicles to charge completely from a dry battery to a full charge. The Nissan Leaf, one of the cheapest electric cars on the market, can only travel around 100 miles before needing to recharge.

Most electric car buyers were concerned about how much money they would save by using an electric car instead of a gasoline-powered car. A quarter of the respondents — the largest segment in the report — said the cost savings over fuel mattered most. That’s because gasoline prices have risen to $4 or more in most places across the United States since the price of crude oil futures rose to around the $100 mark a few months ago.

Only 15 percent of electric car buyers said they were concerned about the cost of an electric car, which can range from $32,780 for the Nissan Leaf to $109,000 for the supercharged Tesla Roadster. (The Roadster can also travel twice as far as the Leaf before the battery runs dry.) The Model S, Tesla Motors’ next car, will come in three different models that can travel between 160 miles and 300 miles before needing a recharge and will cost anywhere from $57,400 for the cheapest model to $77,400 for the model that can travel farthest.

Nissan has also released some information about Leaf buyers that supports the report. Most Leaf owners drove an average of 7 miles per trip and spent about 2 hours charging the car with a 220-volt charger. Leaf owners are also in the top 15 percent of households with regards to income, according to the report. That means they are much more likely to be able to afford some of the higher priced electric cars than typical car buyers who simply need something that will take them from point A to point B as cheaply as possible.

The report also suggests that electric car buyers prefer plug-in electric hybrid cars, which have an internal combustion engine and use batteries and electric motors to improve the fuel efficiency of the car. Plug-in hybrids like the Fisker Karma can achieve fuel efficiency ratings of up to 100 miles per gallon, and can travel much further than plug-in electric cars, so they are more practical in countries like the United States where the population tends to do a lot of long-distance driving.

The survey included around 7,000 respondents in 13 countries, including the United States, China and several countries in Europe.