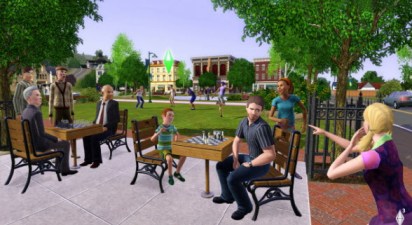 Thank heaven for The Sims 3. That’s probably what Electronic Arts executives are thinking, given the company posted a loss that is smaller than what Wall Street expected for the first fiscal quarter ended June 30.

The company said it saw strong sales of The Sims 3, Fight Night Round 4 and EA Sports Active. John Riccitiello, chief executive of Redwood City, Calif.-based EA, credited good execution for the results. That’s the first time he’s been able to say that in a while. EA had four of the top ten games in both Europe and North America.

The Sims 3 was the top selling title at retail in Europe and North America in the quarter. EA Sports Active sold more than 1.8 million copies, making it EA’s bestselling Wii title ever. That helped drive EA’s share of the Wii market to 21 percent in North America and 13 percent in Europe. It also launched five titles in the quarter that received a Metacritic (a review aggregator) rating of 80 or more, a testament to its focus on game quality.

In the current second fiscal quarter, EA will see some of its staples launch. Madden NFL will launch on Aug. 14 with the kickoff of the football season. As for later this year, the company noted that several titles coming got high marks at the E3 trade show in June: Star Wars: The Old Republic, Left 4 Dead 2, and Mass Effect 2.

EA left is non-GAAP revenue guidance unchanged for the year at about $4.3 billion. The non-GAAP earnings per share are expected to be $1, consistent with previous guidance.