You may think that the world already has too many live-service games, but that is still where Electronic Arts is putting its investment. The publisher confirmed that today as part of the executive remarks in its quarterly earnings statement.

EA reported strong results for Q2 of its fiscal 2020. Total net revenues were $1.348 billion, up from $1.286 billion last year, thanks to strong performance from digital sales on console and especially on PC. The publisher is also seeing a lot of strong sales for its major sports games. FIFA 20, Madden NFL 20, and NHL 20 all launched during Q2, and EA chief executive Andrew Wilson is happy with their performance.

“It was an excellent second quarter for Electronic Arts,” said Wilson. “Our new EA Sports titles are thrilling core fans and bringing in new players, and our ongoing live services are growing with deeply engaged communities.”

Wilson noted that the company is prepared for the holiday with games like Star Wars Jedi: Fallen Order, Need for Speed: Heat, and Plants vs. Zombies: Battle for Neighborville. That’s in addition to new content for its ongoing games.

Following up on Wilson’s remarks, EA chief financial and operating officer Blake Jorgensen stepped in to talk about EA’s live services. Games like Apex Legends, The Sims 4, and the Ultimate Team sports games came through in a big way for the company in Q2.

“The strong results this quarter illustrate the power of our live services and our core franchises,” said Jorgensen. “Strength in Ultimate Team, The Sims 4, and FIFA Online drove live services performance above our expectations.”

“We are doubling-down on live services combined with our core franchises,” said Jorgensen. “We’re investing in games that people play for longer and engage with much more deeply. This focus will continue to drive growth and profitability for the company through the remainder of this year and beyond.”

What does this mean for EA’s games?

Doubling-down on live-service games is going to have a noticeable effect on EA’s release schedule. And you can already see it if you look ahead to its fiscal Q4. 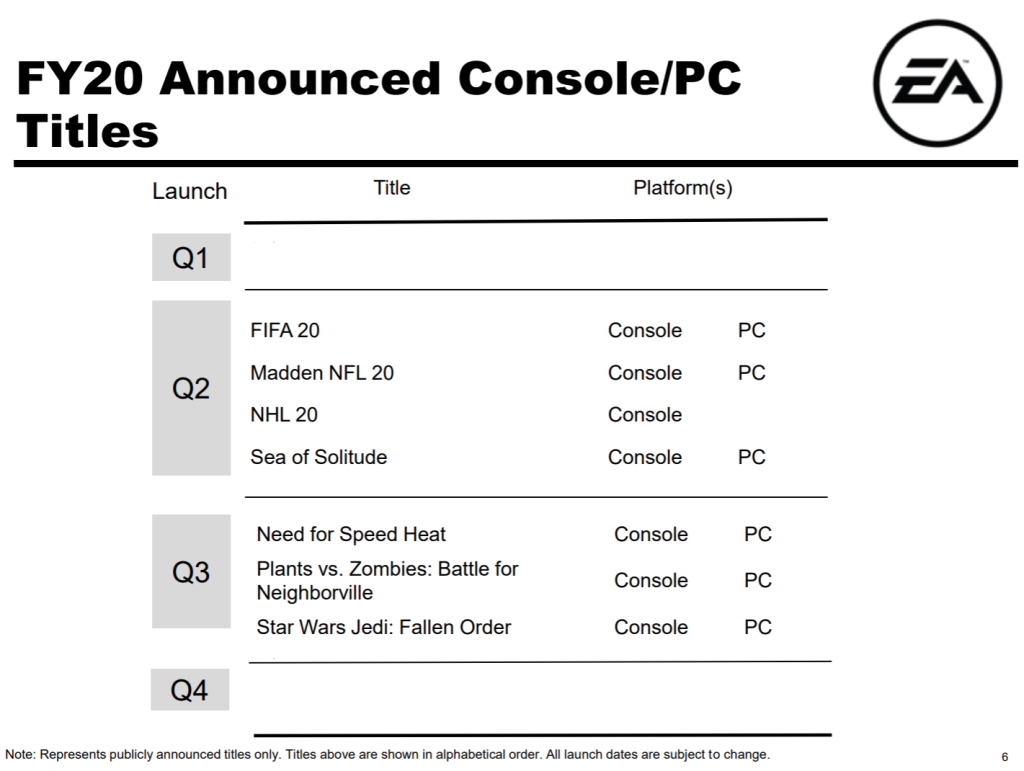 EA doesn’t plan to release any games next quarter, which runs from January 2020 through the end of March 2020. And you can see that it didn’t have any releases in Q1, either. But while these might look like droughts, they aren’t. The company is constantly releasing new content for games to encourage players to come back and spend time and money in ongoing live services. The company is potentially also reloading for the launch of new consoles at the end of 2020, which would fall into Q3 of EA’s fiscal 2021.

So more live-service games means fewer big new releases. More of EA’s teams are going to focus on producing content for successful games instead. EA has already embraced a lighter schedule of new releases, but expect even more of that going forward.