What do you get when you combine the electric car with self-driving technology? Elon Musk’s vision for the future of Tesla.

The Tesla CEO is in talks with Google to get self-driving technology into Tesla’s future cars, according to Bloomberg.

Musk, who says he prefers the term “autopilot” over “self-driving”, argues the move is a natural step in the evolution of the automobile. Still, the Tesla CEO is also quick to note that self-driving technology isn’t a priority for his company — at least not currently.

“We’re not focused on autopilot right now; we will be in the future. Autopilot is not as important as accelerating the transition to electric cars, or to sustainable transport,” he told Bloomberg. 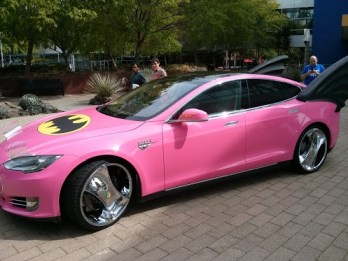 Above: Yeah — this happened.

One problem with the idea, at least as far as Tesla goes, is cost: Cars like the Model S already run for at least $69,000, and slapping on self-driving tech would only make things more expensive. Musk, however, is optimistic, and it’s tough to fault him for his vision — however unrealistic and zany it often feels.

Musk says that Google’s self-driving sensor system is too expensive. One alternative, he says is the camera-based system Toyota showed off earlier this year.

The other big problem is, of course, safety, which is a concern for any company looking to invest in self-driving cars. The technology is still unproven, and if car makers are correct, it’s going to be at least a decade until it’s ready for widespread adoption.

Google isn’t commenting on Musk’s remarks, but considering that Google’s Sergey Brin himself is a (hot pink) Model S owner, it’s fair to assume Google is very much interested in helping Musk along. Both Brin and fellow Google founder Larry Page are also Tesla investors.