The dozens of companies vying for a foothold in the $11.2 billion drone industry — and by extension the $400 million same-day delivery market — have all made more noise than Elroy Air, a San Francisco startup cofounded almost three years ago by former Airwave product manager Clint Cope and Sifteo cofounder David Merrill. Elroy operated largely under the radar until December 2017, when it emerged from stealth with a prototype aircraft that could carry hundreds of pounds of cargo over hundreds of miles.

It has kept its head down since then, but it’s reemerging now with news that it has closed a $9.2 million seed round of funding from new and existing investors Catapult Ventures, Precursor Ventures, Lemnos, Haystack, Shasta Ventures, Levitate Capital, 122West, Amplify Partners, and Homebrew. Elroy also took the wraps off of its latest creation — the unmanned vertical-takeoff-and-landing (VTOL) drone Elroy Air Chaparral — and revealed that it plans to kick off real-world testing of its drone fleet this year, preceding the launch of commercial programs with a small number of shippers in select locations in 2020.

By the tail end of that timeframe, Elroy expects to achieve “24/7” delivery capabilities.

“In developed areas with strong logistics infrastructure, we take … transportation for granted: Next-day delivery in urban metros feels as natural and dependable as a public utility, more like electricity or running water than a luxury — and in these places, rapid logistics gets used a lot, vastly improving quality of life,” Kofi Asante, head of strategy and business development at Elroy, wrote in a blog post. “At Elroy Air, we have set out to improve access to critical goods worldwide by expanding the reach of air cargo.” 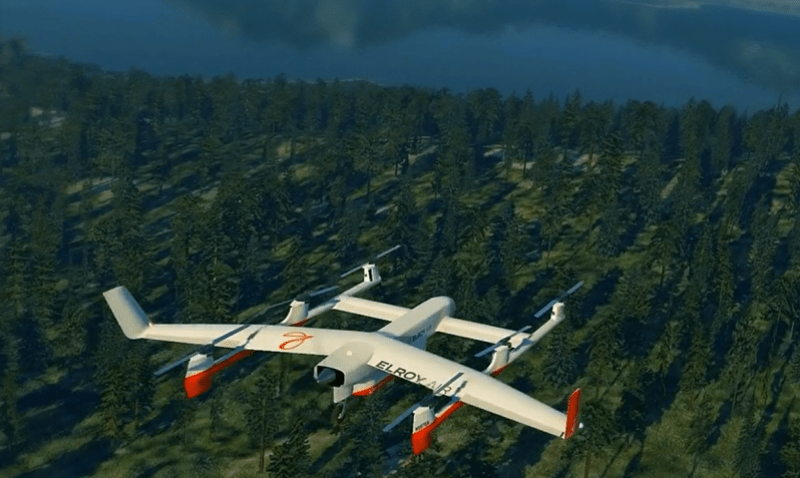 Much like Elroy’s full-scale prototype, the “Aluminum Falcon,” the Chaparral is equipped with a bevy of sensors, including lidar, cameras, and radar, along with an onboard computer running air-traffic management software. It sports a hybrid gas-electric powertrain that Elroy claims emits fewer pollutants than conventional engines and which isn’t reliant on any sort of battery-charge infrastructure, plus propellers and wings that carry it in flight.

The Chaparral can carry between 200 and 500 pounds of cargo — a lot of weight for aircraft with a 300-mile range. Fortunately, humans aren’t tasked with the heavy lifting: Elroy has built a self-guided cargo-handling machine with a ground navigation system that can load — and unload — packages all by itself.

Elroy Air envisions its drones someday delivering not only goods to customers in remote places and traffic-choked urban centers, but care packages and medical supplies to victims of natural and manmade disasters.

“Our vision is to improve quality of life around the planet by expanding the reach of air cargo — safely, efficiently, and autonomously,” Asante wrote. “We want to do this while treading lightly on the environment … As we continue to grow, each delivery will be a step closer to a better, more connected future.”

The startup will have to overcome regulatory hurdles to get there. In order to remain compliant with the U.S. Federal Aviation Administration’s (FAA) Rule 107, which prohibits the use of commercial drones within 500 feet of “non-participating” people and structures, most delivery drones in the U.S. must remain within line of sight and fly over routes without people below.

Efforts are underway to loosen those restrictions. In May 2010, the U.S. Department of Transportation named the handful of states that will join the government’s UAS Integration Pilot program, which aims to establish traffic management systems that can handle commercial drone traffic. And in July, the FAA floated new rules that would allow commercial drone operators to fly aircraft equipped with anti-collision lighting at night and over populated areas.

But challenges remain. Under the FAA’s proposed rules, Elroy would at the very least have to prove that the Chaparral and Aluminum Falcon wouldn’t cause grievous injury if they crashed into a person — a tough sell, given their weight and exposed rotors.

And competition is fierce. UPS, FedEx, Flirtey, Zipline, Flytrex, and Alibaba’s Ele.me are already staking claims in the drone delivery market. That’s to say nothing of Alphabet X lab graduate Wing, which ferries packages via drone to customers in Tampere, Finland and rural parts of southeastern Australia (despite some locals’ protestations); Amazon, which in December 2016 field-tested its Prime Air drone delivery service in Cambridge; and Uber, which in May announced plans to deliver food by drone in San Diego.

If any company’s up to the challenge, though, it’s Elroy. Both Merrill and Cope previously held roles at drone company 3D Robotics. And Elroy counts among its team engineers from the Massachusetts Institute of Technology, Georgia Tech, Stanford, Rice, Embry-Riddle, Uber Freight, Airware, and Honeywell, as well as experts in aerospace, UAVs, industrial design, supply chain, and robotics.