Liaise, a startup that shared the top prize at DEMOfall 09 (the technology conference co-produced by VentureBeat), is opening to the public today after a period of private beta testing. Liaise’s plugin for Microsoft Outlook makes email more useful by extracting action items, and the Sunnyvale, Calif company is unveiling some new features today.

Liaise sounds useful to me because my email inbox is really the center of my work, but it can often feel like important tasks or instructions are buried in the day’s hundreds of emails. When you’ve got Liaise installed, it looks at the email you’re sending, identifies which items require action, and transforms those items into a to-do list, complete with deadlines and priority levels. 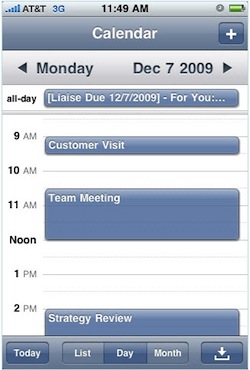 Now Liaise includes a team service, so that everyone on a team can view a list of shared action items, which reflects updates from individual members. So when you finish a task, you don’t have to email everyone saying it’s done. You just mark it as done, and everyone sees the change. Liaise is also integrated with Outlook calendar and the calendar on the iPhone, BlackBerry and other mobile devices, so you can see a summary of the day’s action items (KeyPoints, in the company’s terminology). The final new feature allows users to decide whether KeyPoints are visible to recipients who don’t have Liaise — sometimes you want people to know you’ve turned a task into a Liaise action item, other times you might not.

The company has given me a couple of demos of the product, but I’m not an Outlook user, so without using Liaise regularly it’s tough to gauge how well the plugin can actually guess at which parts of an email email should become action items. Co-founder and chief liaison Sidney Minassian (formerly Liaise’s chief executive) said the company isn’t trying to “boil the sea” — it doesn’t need to develop the most sophisticated language processing around, it just needs to be good enough to get people started, since users can always add and edit action items on their own.

As for where the company goes from here, Minassian said Liaise will be moving to other email platforms, starting with an unidentified partner to be be announced next month.

Liaise raised a first round of funding from Southern Cross Venture Partners. 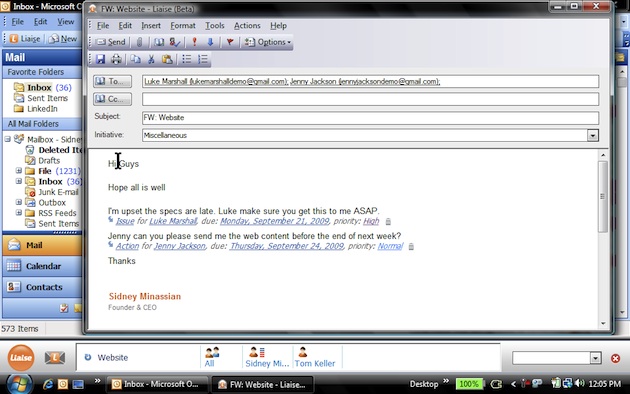