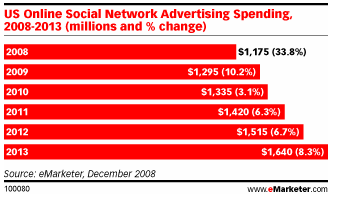 Marketing research firm eMarketer has lowered its projections for social networking company ad revenue this year and for the the forseeable future. The reason, unsurprisingly, is that the firm expects advertisers to cut back spending due to the recession. Social networks will be affected, the firm believes, because the advertising formats they offer are more experimental than time-tested formats such as search advertising.

Advertisers will spend $1.2 billion total on social networks this year, the firm estimates, cutting the projection of $1.4 billion it had made in May. Next year will see a sharper drop in total spending: the firm has updated its previous estimate of $1.8 billion in spending down to $1.3 billion. 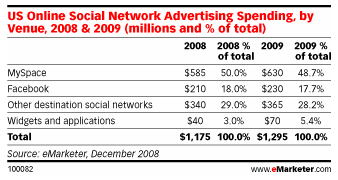 The firm highlights cuts at the largest social networks in the world, MySpace and Facebook. MySpace will bring in $585 million this year, not $755 million; Facebook will bring in $210 million, not $265 million. Facebook, in particular, has been experimenting with a variety of new ad formats, including ads that appear in news feeds and ad “pages” emphasizing user engagement. These formats may prove profitable in future years, but eMarketer believes advertisers will pull back from them for the time being because they “cannot always demonstrate a proven return on investment.”

Of course, eMarketer itself doesn’t have an inside look at what’s happening in social network companies’ bank accounts, as they’re mostly privately owned. Both MySpace and Facebook have been working on new ways to target ads, so it may be that these companies are demonstrating a better return on investment.