About 80.1 million U.S. consumers will pay for mobile apps at least once this year. That represents only 33.3 percent of all mobile users in the country, meaning two-thirds will choose to grab free apps or none at all.

The latest estimates come from independent market research firm eMarketer, which admits the total figure includes feature phones, meaning the chance of paying for a mobile app is artificially decreased. That said, if you look at just smartphone and tablet user groups, the number is still less than half. 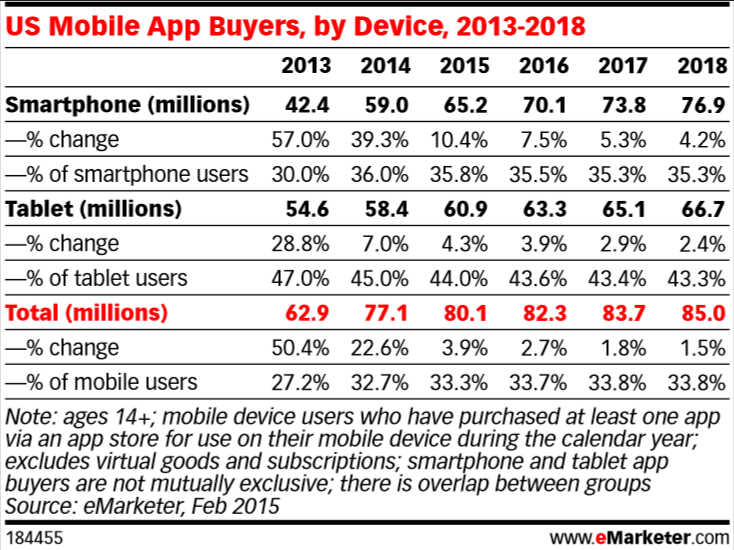 Furthermore, the state of the market isn’t expected to improve, at least according to eMarketer. “The preference for free, ad-supported apps is rising among mobile users, and the share of smartphone and tablet users who pay for apps will actually tick downward over the next four years, despite the continued growth in the number of smartphone and tablet users and the number of app users overall,” Cathy Boyle, senior mobile analyst at eMarketer, said in a statement.

That doesn’t mean there isn’t money to be made selling apps. Reading between the lines, while the share may be decreasing, the larger pie is still growing. The trick is creating, and marketing, an app that many will actually want to purchase.

eMarketer puts it succinctly: “Put a dollar sign in front of an app, and the number of people who are willing to download and install it drops dramatically.” Of course, this applies to almost anything: It’s easier to say no to paying for something if the default is free.

In fact, the firm also notes that while demand may be waning, supply is too. Developers know free apps are more popular, and have thus been steadily moving away from the pay-to-download model in order to attract a larger userbase.

Paid apps have their place (they still attract a sizable and loyal audience in certain categories), but the percentage of the marketplace is declining. In-app purchases, subscriptions, and in-app advertising are often seen as great ways to lure users in with a free download, and then hopefully monetize them later. If you’re building a mobile app nowadays, there are many more ways to make money, as long as you understand the market.