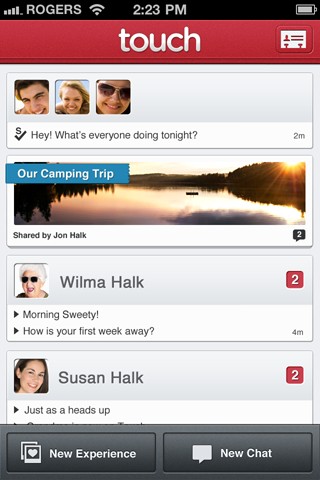 Enflick, the Canadian creator of popular apps like TextNow and PingChat, is taking a big step forward today with the launch of Touch, a new mobile messaging platform to help you keep in touch with your closest friends and family.

Yes, that sounds a bit similar to Path, the year-old mobile social network that recently received a major update. But Touch, available for iOS, Android, and BlackBerry, is more focused on real-time chat rather than posting updates. It’s about active communication with your close friends.

And Touch has one other major advantage over its better-funded competitor: a massive pre-existing user base. The company says it has 21.5 million worldwide users on PingChat and TextNow, and Touch will roll out as an update for 13 million existing PingChat users.

Enflick co-founder and CEO Derek Ting tells us that Touch will completely replace the existing PingChat network — which makes sense, since Touch is an evolved form of that app. Like PingChat, you can have quick text conversations with your friends and share photos, but Touch will also let you easily keep track of all of your friends’ updates in typical social network fashion.

The Touch app looks attractive (though perhaps a bit too similar to Path), and it lets you easily move friends in and out of conversations to make group chats easier. Like all mobile messaging apps, it lets you know if your messages have been delivered and read, as well as when your friends are typing.

Still, Enflick has a long road ahead, as there are plenty of other messaging solutions on the market. And when it comes to keeping in touch with close friends, many are already praising Path’s slick new interface and life-tracking features.

Based in Waterloo, Ontario, Enflick recently raised $1 million in seed funding from Freestyle Capital, the Menlo Ventures Talent fund, and both Justin Bieber and Lady Gaga’s managers (not surprising, given the massive teen demographic for free texting services).