Some 31 companies backed by venture capital firms went public in the fourth quarter, the highest number since the third quarter of the boom year 2000.

The boomlet in IPOs is surprising because critics have said new accounting regulations have hampered companies from going public. But those regulations don’t appear to be holding the good companies back — or some less stellar companies, for that matter. Indeed, the post IPO performance has been decidedly mixed. Some IPOs have been remarkable, such as VMWare’s. The company’s stock value has risen 193 percent since going public in August. But even more have fizzled. In Silicon Valley, ten companies have stocks trading upward since their IPO, but 12 have traded downward.

Meanwhile, mergers and acquisitions are flagging as we enter 2008, at their lowest rate in a decade. Only 45 venture-backed companies were acquired during the fourth quarter. However, there’s no reason to be concerned just yet: The rapid pace of acquisitions earlier in 2007 still made that year a relatively robust one, the most active since 2000. See table below.

While 2007 overall was strong for IPOs too, the amount raised by IPOs wasn’t as much as in 2004 — in part because 2004 was when the stock market first recovered for technology companies after the long post-Internet bubble winter. But the totals for 2007 exceed every other year since 2000,

One area where IPOs aren’t doing too well is life-sciences. Among the seven Silicon Valley IPO in that sector, only MAP Pharmaceuticals’ stock is in positive territory. The Mercury News has a story about the valley’s IPO year.

However, one thing to keep in mind is that the stock market took a hit late in the year because of concerns about a credit crunch stemming from woes in the real estate industry. Indeed, the largest declines have come in the stocks of companies that went public earlier in the year, and which were hit when the market turned downward. 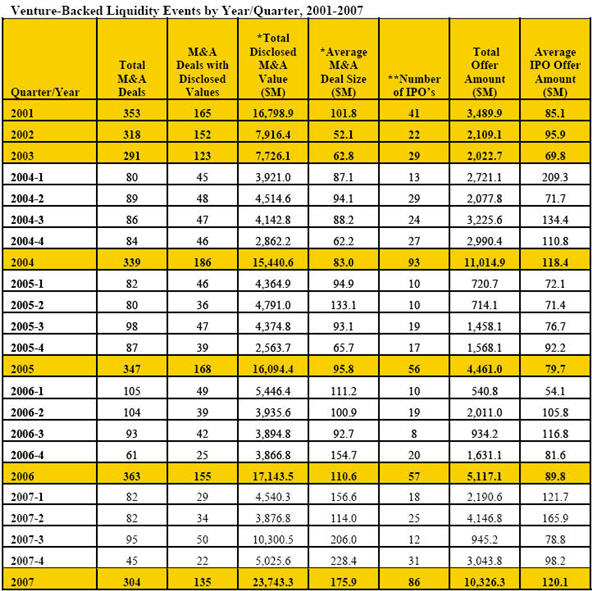