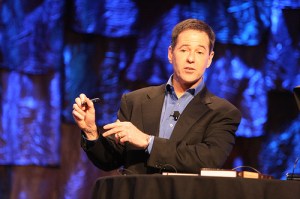 I recently met with Ernst & Young Entrepreneur of the Year finalist, Jim Marggraff, Chairman, CEO, and founder of Livescribe. I asked Marggraff about how he got his start with Livescribe, what it takes to be a good CEO, and what he would tell an aspiring young entrepreneur starting his or her first company.

For those not familiar with Livescribe, the Oakland, Calif. company makes a mobile computing platform in the form of a seemingly ordinary pen. The Livescribe pen captures everything you write with it and allows you to store it on your personal computer. It will also sync the writing with recorded audio, that is captured from a built-in microphone. The pens are becoming increasingly popular among those who take heavy notes, typically in classes or meetings.

Marggraff had an interesting path leading up to the start of Livescribe, beginning with his days at Leapfrog, the educational toy company based in Emeryville, Calif. While at Leapfrog, Marggraff invented the LeapPad Learning System, which was used to improve the reading skills of more than 30 million children. The technology allowed kids to touch paper and hear sound come back. This sparked the concept behind the Livescribe pen — recording written word and syncing it with sound.

Marggraff left Leapfrog for another technology company before starting Livescribe, leaving a trail of IP along the way, but was soon able to raise venture money and begin selling his smart pen creation. 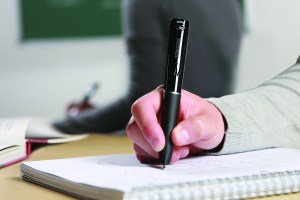 When asked about the first step required to turn a great idea into a great business, Marggraff strongly advises you study and understand your market by talking to as many people as possible. First-time entrepreneurs will often rush to raise capital and build a product before truly knowing whether anyone else wants it. This will typically lead to failure that could have been avoided by doing the initial market research.

And what do you do once you’ve polished your business plan and raised your first round of capital? According to Marggraff, “you put the money in the bank, you look how long it’s going to carry you, and you start planning your next round of financing.” CEOs often fail to plan their resources far enough ahead, focusing heavily on the team and product, but as Marggraff says, “It’s always a matter of cash.” Without that cash to support ongoing development and growth, companies can hit the wall sooner than they often expect.

Want to be the next Ernst & Young Northern California Entrepreneur Of The Year? Provide your contact information and we’ll let you know when the nomination period opens in January 2012. Fill out the form here!