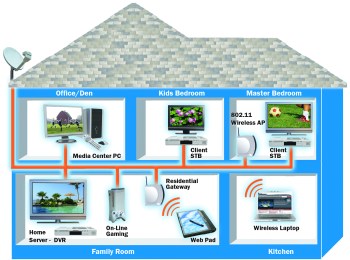 It’s painful to get satellite TV service installed at your home because technicians have to spend a lot of time wiring multiple set-top boxes to a single dish antenna.

Entropic Communications has a solution that eliminates that problem. And today, the San Diego, Calif. company is announcing that DirecTV is adopting its chips.

The company’s chip is called a “channel stack switch” and it will be built into a new DirecTV satellite dish. Earlier this year, DirecTV said it would include the Entropic chips in its newest set-top boxes. Now you don’t have be shy about adding three or four DirecTV boxes to your home because the switch chip lets all of those boxes use the same wire back to the satellite dish on the roof. It used to take six cables to hook up four units — a high-definition digital video recorder, a standard DVR, and two standard set-tops. These days, about three set-tops per home is the average.

Installing those cables took a long time and drove up labor costs. Entropic can support up to 12 tuners on a single wire because the chips are made out of silicon germanium. Such chips are hard to design, but they’re capable of working out the complex signaling to let a lot of data travel down the same pathway at the same time. DirecTV acknowledges the chips will save it a lot of money. EchoStar also plans to use the chips, which were originally developed by RF Magic, which Entropic bought last year for an undisclosed price.

Entropic is a publicly traded chip-design company (NASDAQ: ENTR) that is neither a sexy start-up nor a giant chip maker. But they’re doing something innovative under the radar. They’re also jumping on a couple of interesting market trends and they’re expanding through acquisition. As we add gadget after gadget into our homes and network them together, Entropic expects to be there to supply the right silicon. We’ll see if that’s enough to turn it into a profitable enterprise.

The satellite market is the second major piece of Entropic’s business. Since 2004, Entropic has been building a different home-networking chip business. It has carved a niche as a supplier of chips that can create high-speed home networks via the coaxial cable TV wires in a house.

Patrick Henry, chief executive of Entropic, said the Multimedia over Coax Alliance standard is taking off because wireless isn’t up to the challenge of transferring high-definition video around the home. The advantage for MoCA is that there are already 70 million homes in the U.S. with cable wiring that could be used to transfer data in the home. Those wires are shielded from interference and so they have a lot of network bandwidth. The demand to do this is picking up as more consumers use digital video recorders and transfer video from one TV to another so that family members can watch different shows in various rooms. Entropic’s MoCA chips can transfer data at 270 megabits a second. That’s good enough to transfer HD video at speeds that don’t ruin the visual quality.

Verizon has been buying the chips for use it the deployment of its fiber-based broadband service, FiOS. Homes with the high-speed FiOS service need fast home networking to share the fast Internet connection throughout the house. So far, Verizon has signed up 1.5 million customers, resulting in lots of chip sales for Entropic, thanks to the need to distribute video around the home. The market for home networking chips on coax is expected to grow at a 54 percent compound annual growth rate from 2007 to 2012, according to market researcher In-Stat. John Graham, head of marketing for Entropic, says there are 25 to 35 MoCA networking products in various stages of deployment, with the Entropic chips inside.

By no means is MoCA’s success assured, as there are new wireless technologies emerging and others want to network homes via electrical wiring as well. An industry consortium, the HomeGrid Forum, has formed to combine the MoCA, phone line and electrical wiring standards so that the same chips can be used in any type of home networking solution. Also, 19 percent of homes in the U.S. may only have coax running to a few rooms of the house.

There is no assurance that home networking will take off as projected. Pundits have predicted its rise for years. But multi-room activities such as gaming, transferring and watching movies, and sharing an Internet connection are going to drive demand. Entropic has been slogging for seven years, waiting for the market to grow up, Henry said.

While it waits, the company is losing money. In the first quarter, it lost $3.9 million on revenues of $42 million. The stock closed at $2.37 a share on Wednesday, down from a peak of $8.46 a share around the time when it went public in December.

While Entropic has the dominant market share for MoCA chips, it will face competition. What’s a sign they’re on the right track? Broadcom is jumping into the market for MoCA chips. Graham says that validates the MoCA chip market. NXP is also planning on joining the market. If Entropic succeeds, it will likely to continue to expand by acquisitions. It reminds me of the young Broadcom that way.