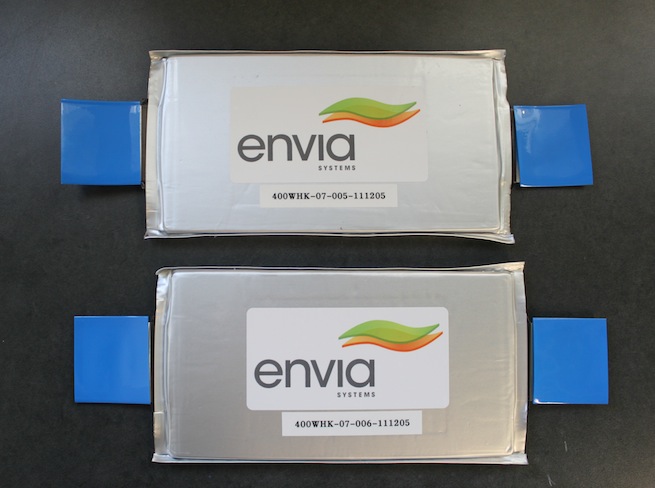 There are two major concerns when it comes to electric cars; how long they can drive without needing to stop for a charge and how much they cost. Envia, a lithium ion battery developer, hopes to eliminate both concerns with its latest world-record 400 watt-hour/kilogram battery.

“We have built 400 watt per kilogram batteries, which have been considered the holy grail of electric cars,” said Envia’s chief executive Atul Kapadia said in an interview with VentureBeat, “This is a milestone that many car companies have wanted to reach.”

To understand the cost of charging and using an electric car battery, you have to understand how we pay for electricity. Power utilities charge by kilowatt-hour, which is 1000 kilowatts of power used every 60 minutes. The industry standard for electric car batteries has hovered between 110 and 140 watt-hours/kilogram, costing between $250 and $350 per kilowatt-hour to operate.

Envia’s new battery clocks in at 400 watt-hours/kilogram, meaning more energy is stored per kilogram in the battery, making it more energy-efficient. The new battery will cost $125 per kilowatt-hour, according to the company. Because Envia’s battery has a higher energy density, it can also travel farther on a charge. The company boasts a 300 mile range with the new battery, higher than previous batteries which delivered 80-100 mile ranges.

Cheaper electric cars on the horizon

Electric cars having begun to gain traction, in large part thanks to Tesla’s electric offerings and GM’s Chevy Volt. However, Tesla’s Model S and Model X cars are still a bit out of the general public’s price range, costing around $50,000. The Chevy Volt, with a $31,000 price tag, is more accessible, but to gain mass appeal the cost still needs to be slashed.

“Tesla isn’t really mass affordable,” said Kapadia, “The mission of the company is make the electric cars affordable. If you lower the cost enough, the market will respond. Our goal was to halve the price of a 300 mile car, and if you make it half, it becomes viable.”

Envia’s lower cost battery will give GM the chance to lower the cost of the Volt, making it more available to the general car buying public. In addition, other car companies could use the technology to create economically viable cars that could compete with gasoline-powered economy models.

General Motors hasn’t revealed any details on how it may use this technology, or if its done anything already. But being a major stakeholder in Envia, I can only imagine its got something planned.

A few more hurdles to overcome

Electric cars may be the wave of the future, but the technology still has a way to go. For one, you need to charge your car to power it, which can mean higher utility costs and the need to install special charging outlets. Tesla recently came under fire over reports that you could “brick” its cars by letting its battery complete discharge. And while Tesla refuted the claims, it did raise some concerns over whether electric vehicle technology is full ready for mainstream use.

Technology issues aside, electric cars haven’t reached a covetable status among mainstream Americans, who typically want full-featured powerful cars. Though the general population may not be fully on board with electric cars just yet, at least “they cost too much” won’t be a valid excuse for much longer.