Epson is releasing the app today to make it easier for drone pilots to navigate the skies while keeping the drone in full view. That’s because you see through the glass to the drone and keep an eye on the glasses’ heads-up display at the same time.

Creative agency YML designed the drone AR app to work with the Epson Moverio BT-300 AR glasses, and I tried it out with a DJI drone in a demo at the SF Drone School on Treasure Island. You can see what the experience was like in both videos embedded in this story. 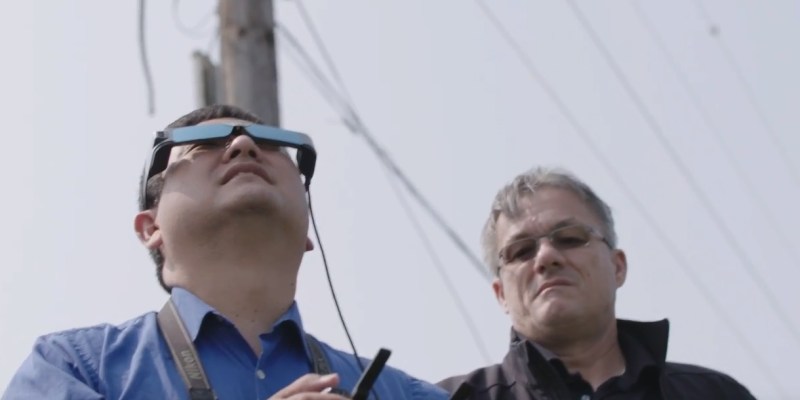 AR is a promising new technology with a wide array of applications, but it has been slow to take off, and so companies like Epson are putting in a lot of engineering and resources to make apps that can help with consumer adoption.

In this case, Epson’s Moverio AR smart eyewear platform works with the Epson Drone Soar app for DJI drone pilots using the Epson Moverio AR smart glasses platform. It provides AR content, flight telemetry data, and video feed monitoring. I was able to use wear the glasses and see both the drone and an overlay on the screen at the same time. Werner von Stein, founder of the SF Drone School on Treasure Island, gave me a few pointers on how to fly. He got the drone up in the air, and then he handed the controls over to me. (Out on Treasure Island, you can fly drones freely, whereas most other urban areas there are restrictions.)

Epson has been making Moverio AR smart glasses for seven years. A few years ago, it identified drone piloting as a good use case for the glasses. Normally, drones such as the DJI model I flew require you to insert a smartphone or tablet into the controller. But that means that the pilot has to look down to see the drone’s camera view, and then look up to see which direction the drone is actually flying. That makes it very hard to stay on a course or make a maneuver accurately, said Leon Laroue, Epson technical product manager for AR, in an interview with VentureBeat.

On top of that, if there’s bright sunlight, all you see is glare when you look at the smartphone screen. With the Moverio glasses, Laroue clipped on some sunshades and I was able to see much better, looking straight at my drone through the glasses.

“With our glasses and our new app, you can now see exactly where you need to fly,” Laroue said.

Redwood Shores, California-based YML made the app exclusively for the Epson Moverio BT-300 (FPV/Drone Edition). It had to figure out how to create a user interface that worked for pilots, giving them the right amount of data in real time to assist with navigation. You can do things like adjust the camera settings, brightness, and shutter settings or toggle between transparent and first-person modes without ever having to let go of the drone controller, Laroue said. While you are wearing the glasses, you can turn on head tracking to move the drone’s camera and point it in a particular direction. If you let go of a button, you can lock the camera in position.

It can also be used to visualize a route pre-flight and then capture post-flight visualization. The idea is to help DJI improve the safety, productivity, and capabilities of DJI drones for hobbyists and professionals alike.

“This was such a great opportunity to bring what we do in innovative design as an agency to a new kind of application,” said Ashish Toshniwal, CEO of YML, in an interview with VentureBeat. “Hollywood studios could send a scout to a location. The scout can use this drone to capture the images of a location and send it back. It makes life so much more efficient.” 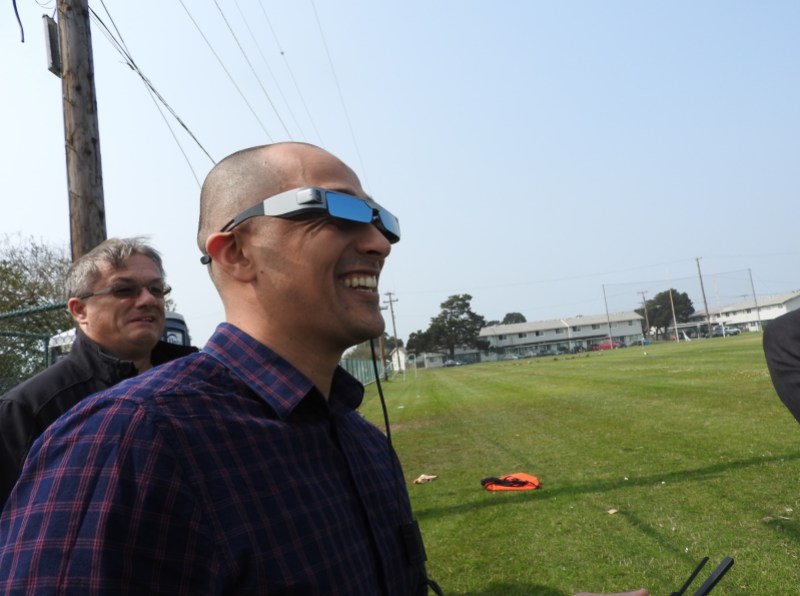 Above: Epson’s Moverio AR glasses aren’t as bulky as they once were.

This functionality allows pilots to simultaneously see crucial telemetry data, augmented flight tools, and real-time video feeds, while remaining within line-of-sight of their drone. As the data is displayed directly in front of the user, pilots using the Epson Drone Soar app no longer need to look down continuously at their mobile device.

“By combining the power of augmented reality delivered by the Epson Moverio BT-300 and YML’s superlative design, the heads-up app is redefining the way drone enthusiasts experience their aircraft,” said Romsin Oushana of DJI Partnerships, in a statement. “Available to the consumer market for the first time, the app enables users to push the limits of drone piloting in ways that have never been done before.”

The Epson Soar app comes equipped with easy-to-use features including a downloadable map, where a user can select the region of the map they want to download for offline usage.

Pilots can also use it for a pre-flight status check, as it notifies users of flight restrictions or if something needs to be changed before takeoff. It has a Drone Connect feature that gives an easily accessible view of drone vitals including flight status, battery, HD mode, altitude, and more.

Users can select and switch between over ten smart modes for desired flight experience. For instance, I was able to switch the view in my glasses from the transparent view (what I saw through the glasses) to the first-person view that the drone saw from its camera, which was pointed down at the ground. If my aim was to capture footage or take pictures, then I could see exactly what was being captured. 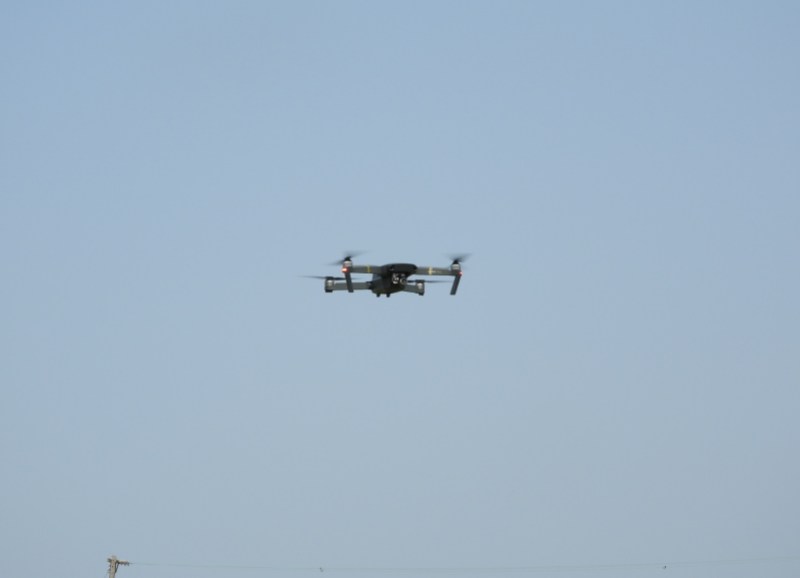 Above: A DJI drone piloted by Dean Takahashi.

The AR glasses have about a six-hour battery life. The drone, which has a 25-minute battery life, can fly a mile vertically or five miles away. During my demo, it was a hazy day, thanks to all the fires in the region. For a while, I lost sight of my drone. Von Stein showed me where it was.

“If there’s any bit of latency in controlling the drone, you can crash it,” Laroue said. “It’s a common issue to lose sight of your drone. So it’s important to be able to keep it in view for as long as possible.”

Later on, the AR glasses will have a “find my drone” arrow that will point to the part of the screen where your drone is flying. Another feature in the works is the ability to see a visualized flight path on the glasses.

“We believe the AR glasses are the optimal mode for piloting drones,” Laroue said.

The app also has In-flight Camera Setting Editing, which lets users edit camera settings of the drone while in flight or when connected to select optimal settings for shooting conditions.

The Epson Soar app is the second application from YML, a creative technology agency, in a series of aerial augmented reality applications developed in partnership with DJI and Epson.

The app for Epson Moverio BT-300 smart glasses is available now on the Moverio Apps Market and can be experienced today at most DJI Authorized Retail stores and many local drone retailers.

Fortunately, DJI has a one-button control for landing the drone. Wearing the glasses, you can toggle through the menu and press a button, enabling the autopilot to take over and land the drone. And that’s why I didn’t crash my drone.