Since Regulation Crowdfunding began on May 16 last year, 335 companies have filed offering documents with the Securities and Exchange Commission (SEC) to fundraise on securities-based crowdfunding platforms. Of those companies, 43 percent were funded, 30 percent failed, and the remainder are still open and trying to get funding.

The total capital committed to date on these platforms is in excess of $40 million, with the average successful crowdfunding campaign raising around $282,000 from about 312 investors. The most recent quarter saw the greatest number of companies file with the SEC. This signals that issuers might finally be catching on to the opportunity that Regulation Crowdfunding holds. 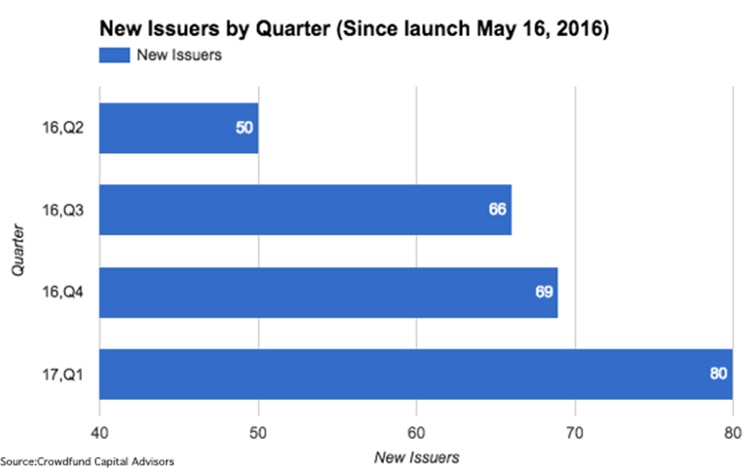 Above: Four quarters of growth in the number of issuers (companies launching an equity crowdfunding campaign)

And what about the portals that have emerged to host these fundraises? Of the 26 portals registered with FINRA to help companies sell Regulation Crowdfunding securities, nine have already closed, gone out of business, or been shut down. Of those remaining, Wefunder (based in San Francisco and Massachusetts) is leading the pack both in the number of deals and total dollars raised. They have been in business since Regulation Crowdfunding went into effect and have helped 63 companies pull in almost $18 million. Start Engine (in Los Angeles) ranks second with 27 campaigns funded, and Microventures (Austin), NextSeed (Houston), SeedInvest (New York), and Republic (New York) rank third through sixth. Interestingly, the location of these platforms also matches the states that have raised the most capital. 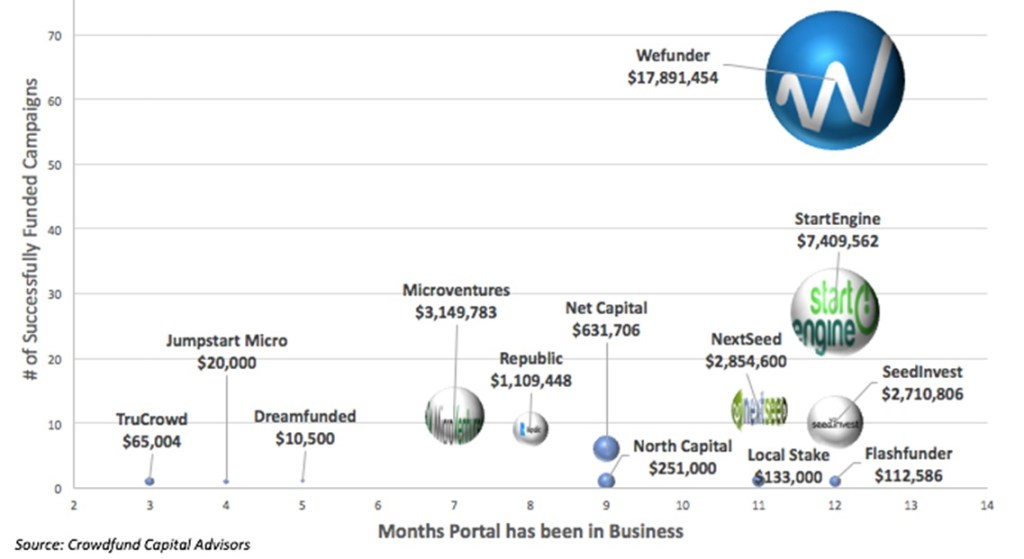 Several platforms (both old and new) have only funded a handful of campaigns. This may signal that brand awareness and marketing by the larger incumbents is driving both companies seeking capital and investors looking for deal flow.

However, If you dig a little deeper and look at the capital raised during the last three quarters, you will see in that while Wefunder is leading in overall dollars, both Microventures and Start Engine are not far behind in terms of quarterly commitments (see Orange bar to compare Q1, 17 results). 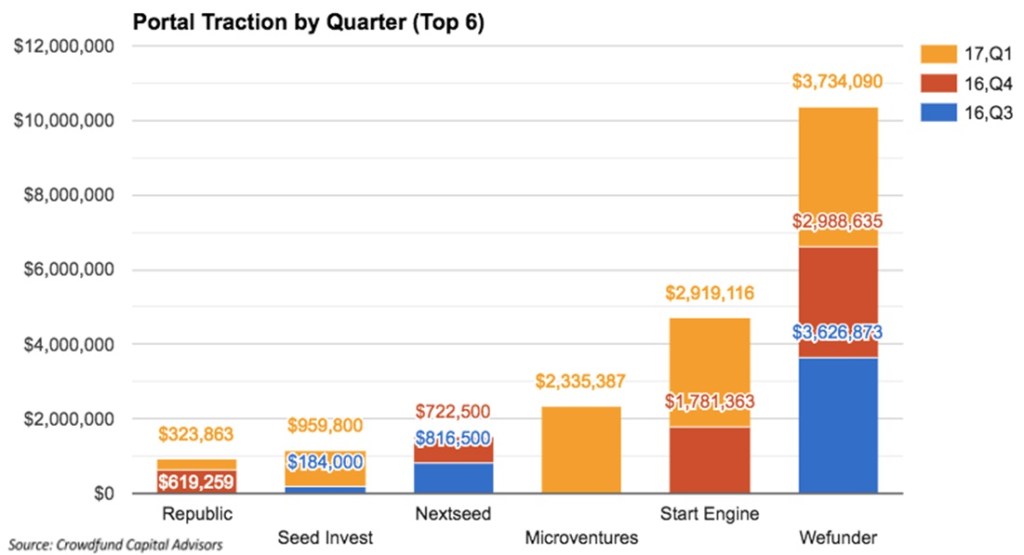 Microventures, the offshoot of rewards-based crowdfunding platform Indiegogo only launched at the end of last year and is already showing strong results, with 100 percent campaign success. While the platform hasn’t run many campaigns, the campaigns it has run have raised slightly more success than those on Wefunder. 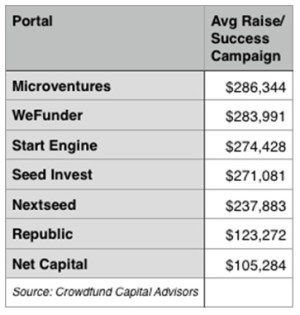 I expect to see Indiegogo put more time and energy into converting its most successful rewards campaigns into equity campaigns on Microventures. This will make them a strong contender in the marketplace. Start Engine, with its strong performance in the transportation, software and entertainment/media sectors will also be a strong contender, as will Republic, the offshoot of Angelist and SeedInvest.

If you are a startup looking to crowdfund, you are likely most interested in success rates. While Wefunder has the most deals and raised the most money in aggregate, it holds second place in terms of the average raise per successful campaign. Microventures took the prize with $286,334. For the moment this is a competitive advantage as Microventures moves from its go-to-market strategy to its market expansion one. Nonetheless, Start Engine and SeedInvest aren’t far behind and will most likely be appealing to startups as well.

Now that the industry is a year old and has seen steady growth with relatively few mishaps, I expect the next year to be even more competitive. Wefunder got out of the gate strong, but can it stand up to the portals that have deep-pocket VCs behind them?