A startup called Ersatz Labs wants to help lots of companies intelligently answer lots of questions after reviewing lots of data, just as big tech companies like Google and Netflix do.

Toward that end, today Ersatz is launching a cloud service for deep learning, as well as a hardware-software package to run inside companies’ existing facilities. While deep learning services are often geared toward specific uses, like text processing and image recognition, Ersatz makes deep learning available for any type of use.

Ersatz started out as a side project for categorizing emails for co-founder and chief executive Dave Sullivan, who was operating software development consulting firm Blackcloud BSG. Sullivan ended up cobbling together his own workstation containing graphics cards that could do deep learning more quickly than standard chips, and then writing his own deep learning programs. More than 2,200 people are using the beta version of the Ersatz software that emerged from the side project.

Now Ersatz wants to get lots of businesses incorporating the service into their applications, alongside other technologies that can be difficult to create from scratch, Sullivan said in an interview with VentureBeat.

“It’s going to become an infrastructure concept,” Sullivan said. “It’s going to be another API [application programming interface] that you can extrapolate away. [As you’re] sending input and getting output, it’s learning things, getting predictions, but from there, it’s just a bunch of plugins.”

How long it will take before that happen, it’s anyone’s guess. Still, it’s true that in recent months the deep learning industry has certainly gained attention.

Startups have made headlines too. Nervana, which is building hardware for deep learning, picked up funding, and Skymind launched as an open-source deep learning outfit.

Other companies worth mentioning in conversations about deep learning and the broader category of machine learning include Wise.io, BigML, and AlchemyAPI.

And Sullivan expects even more startups to emerge later this year.

On Ersatz, people can upload data, train a neural network to find patterns, and then throw new data sets at the neural network and receive responses. The cloud service costs 40 cents a minute. Alternatively, companies can pay tens of thousands up front to get the GPU-packed hardware and the software to run on that hardware in their on-premises data centers, Sullivan said. 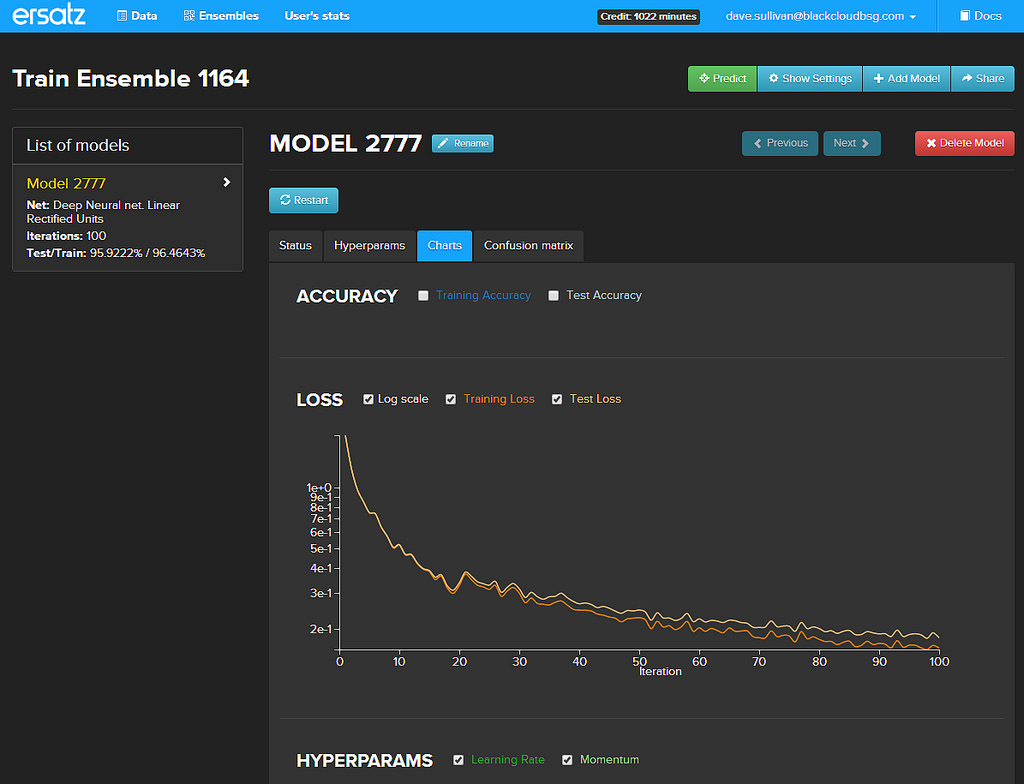 Above: A screen shot of Ersatz Labs’ software.

Deep learning is not intended to perform brain-like functions with computers. Rather, its architecture takes inspiration from the branching neuron structures in the brain, whereby neurons can shoot off sparks or impulses to other neurons.

Despite the difference, all the talk from IBM and others about taking cues from brains to do computing could be coming at a good time for Ersatz.

So far, San Francisco-based Ersatz hasn’t raised much money. It pulled in $250,000 in February, Sullivan said. And the team is nine people strong, after starting in January 2013.