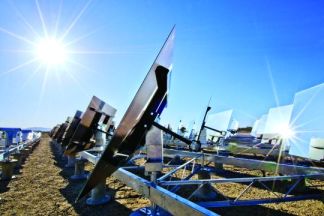 ESolar, a builder of solar thermal equipment and plants, has landed what could be a $5 billion, 2-gigawatt deal in China, putting it among the marquee names in solar, like First Solar and Solyndra. Not only is it breaking out of a pack of competitors, it’s also putting the U.S. on the map as a major solar thermal distributor.

Pasadena, Calif.-based ESolar will be partnering with China Shandong Penglai Electric Power Equipment Manufacturing to build a solar thermal array capable of powering more than 2 million homes. The two companies will work together to build a field of mirrors used to concentrate sunlight on heat-trapping water. The water is converted to steam, which turns turbines.

Considering how much sunny, empty land China has, it could become the world’s first solar-thermal powerhouse. Before now, it’s relied mostly on photovoltaics — having struck a deal with First Solar for the same amount of energy in September.

Why did China go with three-year-old eSolar instead of Spain’s globally-successful Abengoa Solar , or U.S.-based BrightSource Energy (Bechtel’s choice for its 440-megwatt solar thermal plant)? Apparently, eSolar — which brought its first solar thermal plant, at just 5 megawatts, online in August — is offering terms that are easier to swallow, agreeing to license most of its technology, including the software used to turn the mirrors to just the right angle based on the movement of the sun. The company has also excelled at building small, highly effective plants to generate under 50 megawatts. This would allow China Shandong to test the technology in phases and scale it more easily.

If the project progresses as planned over the next decade, eSolar could very well become profitable, not only setting it up to become one of the first solar IPOs (First Solar is out ahead, with Solyndra potentially going next), but also establishing a bigger foothold for U.S. renewable companies in China, where the market is sure to explode in the next several years. The government has plans to generate 10,000 megawatts from solar by 2020.

This is the second major deal eSolar has closed in Asia, having signed with India’s Acme Group to build 1,000 megawatts of solar thermal capacity. It may also expand its operations to the sub-Saharan region of Africa with another recent partnership. It also has several domestic projects in the works, including one that will transmit about 245 megawatts of solar thermal power through Southern California Edison.

Despite its youth and only recent success, a lot of important people have believed in eSolar since the start — and it looks like it’s finally paying off. The company raised more that $170 million in venture funding so far from Google.org, Idealab and India’s Acme, in addition to Oak Investment Partners and NRG Energy.