The new Android flagship Essential phone is a paradox. It is a capable, well-crafted flagship smartphone built in a shockingly short time by a new company staffed with a crew of mobile hardware veterans. But it still falls short when compared to its mass-market competitors.

Essential has made significant strides in tackling some technical problems in its effort to beat Apple and Samsung at their own game, and with a smaller team. That the resulting phone doesn’t quite feel fully baked is largely due to a handful of seemingly self-inflicted problems. 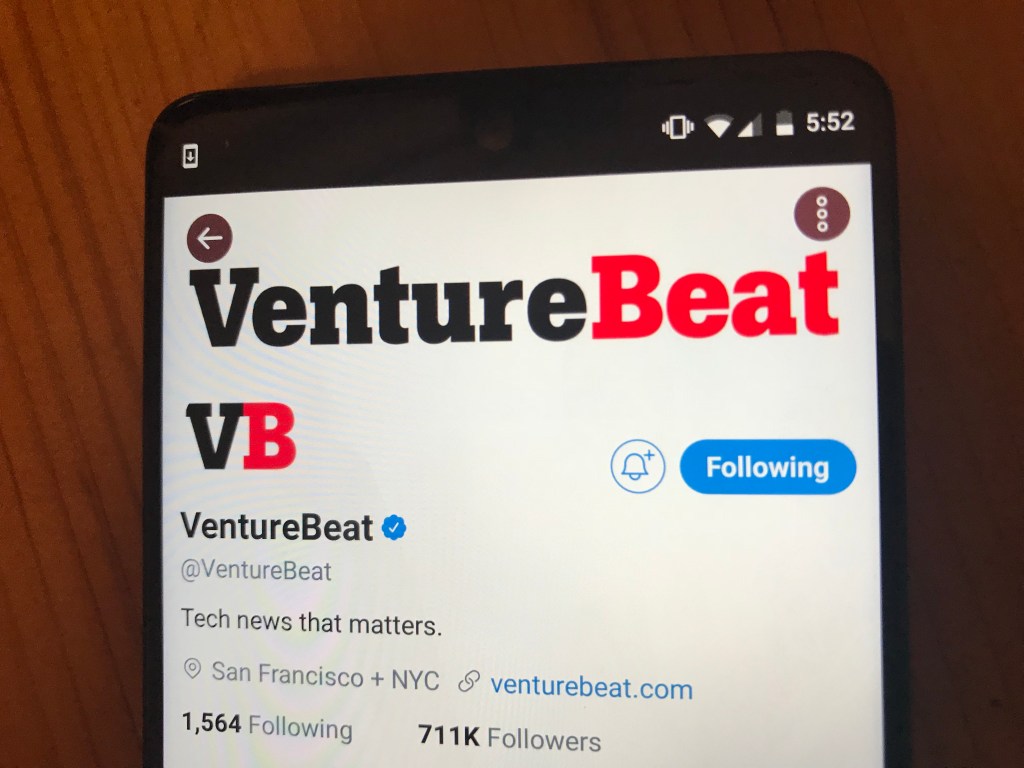 Above: While the Essential PH-1’s upper display is cool, many apps don’t make use of it.

Expanded display is out of step with apps

If there’s one feature of the Essential PH-1 that’s emblematic of that paradox, it’s the phone’s display. When users first fire the phone up, they’ll notice that the wallpaper stretches all the way up to the top edge of the screen, with a small cutout for a front-facing camera. There’s a bezel at the bottom of the phone, but the display otherwise reaches the other three edges of the device.

It’s visually striking to see an image stretch all the way to the top of a phone, and something that I still haven’t become quite used to — in a good way. Being able to cram a larger screen into a smaller frame also means that the physical phone body can be slightly smaller, making it more comfortable to hold.

But at the same time, it’s not practical, at least in my experience with the PH-1. While the upper part of the screen can be used to display the icons that typically occupy a smartphone’s status bar, apps don’t take advantage of the added space.

In portrait mode, it’s possible for the upper cutout to show the top of some apps, with varying degrees of utility. In order to show off the icons of applications that have generated notifications, the PH-1 applies a lampshade effect to that area of the screen. This can slice the upper parts of some compatible apps in half (see: Snapchat), while others just ignore it entirely (Twitter, Facebook, Foursquare, Lyft, Pinterest, Instagram, and a host of others that I tested).

In landscape mode, Hearthstone just squares off the U-shaped upper cutout and ignores it entirely. The same thing goes for YouTube video and most other programs. That’s better than the alternative of having a camera-shaped bite taken out of the side of some footage, but it makes the iconic display feel less useful.

Essential says that it’s working with the developers of the most popular apps to make them work with the screen, but it’s hard to know the extent to which software makers will be willing to modify their apps to support what is a niche device for right now.

There’s another issue compounding all that. Reaching the top of the screen to actually swipe down the notifications list is harder because it’s further away from the base of the phone (because of the upper edge of the screen).

Google tried to rectify the issue of reachability with its Pixel phones by moving the screen down when users flick downwards on the rear fingerprint sensor. Apple lets users double-tap on the front Touch ID sensor to shrink things down. No similar feature is present on the PH-1.

Speaking of the phone’s fingerprint sensor, it’s one of the least reliable fingerprint sensors I’ve used on a recent flagship phone. It was rare for me to unlock the device the first time pulling it out of my pocket, and the location of the sensor felt just out of reach for my fingers. (I wear a men’s medium set of gloves, for reference.)

If there’s one thing that I didn’t expect to miss while trying out the PH-1, it’s my iPhone 7’s Taptic Engine, Apple’s hardware for providing force feedback based on user interaction with hardware. It’s hard to describe, but the vibrations on the iPhone feel more like a thump or thud, compared to the high-pitched, buzzy vibration of the PH-1. It’s a small difference, but I found myself frowning when the Essential phone buzzed in my hand or pocket. 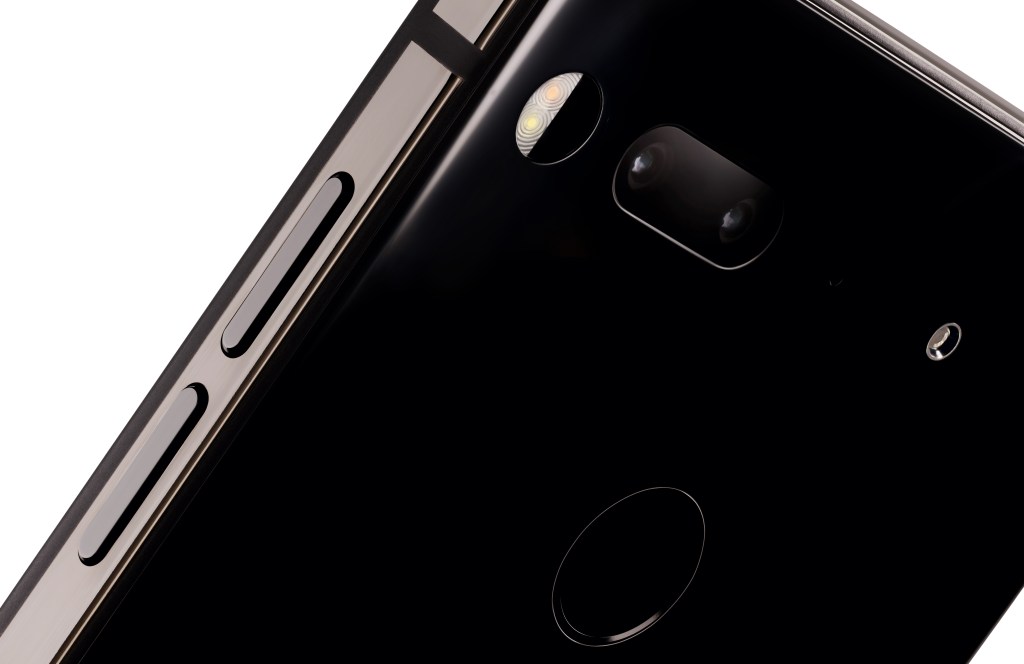 Above: A press photo shows the exterior of a PH-1, complete with titanium case, twin cameras, fingerprint sensor, and accessory mounting area.

To be clear, all of this is not to say that the PH-1 is a failure — far from it. This is a very capable and successful flagship, especially as a first outing for a company that has only existed for 18 months, even with veterans from businesses like Apple and Motorola and the backing of Andy Rubin, the father of Android.

The reason these admittedly nitpicky issues matter to a phone like the PH-1 is that this is a company that clearly sweats the small stuff in their products. The new phone is supposed to be better than the major players’ state of the art devices because of Essential’s ability to implement technologies like the edge-to-edge display.

Essential put in a ton of effort to ensure the phone’s titanium frame is lightweight, affordable, and able to be produced at scale. In order to eliminate a camera bump but maintain the quality of other sensors, the company chose a twin camera setup that uses one color and one monochrome sensor to improve performance, especially in low-light scenarios.

To make the screen work, designers put the upper speaker for the phone, which is used for calls, in a tiny slit in the upper bezel of the case that also includes an indicator LED.

All of that is to say that this doesn’t feel like a minimum viable phone. The team has been through dozens of iterations on different systems. But when judged against its more established competitors, the PH-1 feels less complete.

The PH-1’s software doesn’t provide much in the way of surprises, which is a good thing. The Essential team made the smart decision to use stock Android Nougat (version 7.1.1 in the device I tested), rather than trying to add its own wrapper around the operating system. The software user experience felt clean, though the phone was weirdly unresponsive in certain scenarios, like trying to scroll a long YouTube video.

As someone who isn’t an experienced Android user, it’s hard to pick out which bugs were caused by issues with the PH-1’s hardware and which were related to things outside of the team’s control.

While Essential has promoted this as a phone without branding, that’s not quite accurate. After slotting a Sprint SIM the company provided into the PH-1 and not restoring the phone from a backup, it installed Tidal and My Sprint without informing me. Deleting the apps was easy enough, but they appear to be inescapable when first setting up a new phone. 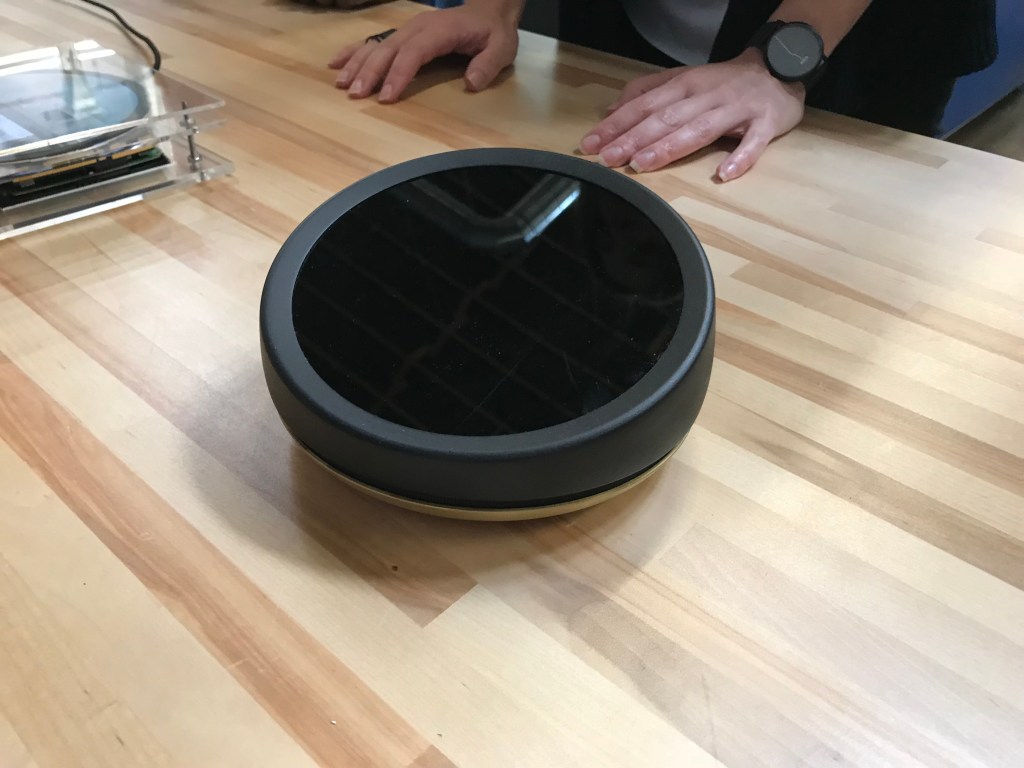 Above: A model of what Essential’s smart home hub could look like when the company releases it in the future.

So, what does this mean for the future of Essential? The company hasn’t said how many phones it’s planning to sell, but the team isn’t expecting to hit Apple or Samsung scale with these devices.

Essential isn’t planning to stop with a phone, however. The company is planning to later release a new smart home hub that will run a wide variety of virtual assistants and connect to different home automation gadgets. That piece of hardware will be powered by a custom operating system that the company is still working on. But it’s unclear whether there will be an application ecosystem for it, which could prove problematic.

Still, Essential has an opportunity to be a force for positive change in the smartphone ecosystem. The company’s focus on an edge-to-edge display could help motivate other players to follow suit, and the same thing could go for the team’s embrace of clean, stock Android.