During a meeting in Brussels, executives of HTT, based in Southern California, met with the director of Land Transport at  the Directorate-General for Mobility and Transport of the European Commission. The guidelines were developed in partnership with transportation inspection company Tüv Süd.

In an effort to ensure the public that Hyperloop is safe, the companies want the EC to create a detailed set of testing and development rules.

“It is important to create unified standards and procedures with HyperloopTT’s system, along with other potential system providers,” said HTT CEO Dirk Ahlborn in statement. “HyperloopTT continues to be at the forefront of the Hyperloop movement, working directly with governments and members of the regulatory industry. We are pleased to be working alongside the European Commission and our industry-leading partners to help create this latest guideline.”

Of course, HTT is just one of several companies developing a Hyperloop system, the vacuum-based high-velocity transportation concept first proposed by Elon Musk and then open-sourced. The ranks also include Hyperloop One, which is backed by Virgin’s Richard Branson.

Founded in 2013, HTT relies on a mix of full-time employees and crowdsourced design work. The company has signed a range of deals to begin exploratory work on systems in places like Hamburg and Dubai. And it’s building a full-scale testing track in Toulouse, France.

The general guidelines are intended to offer a starting point for mapping out future regulatory discussions: 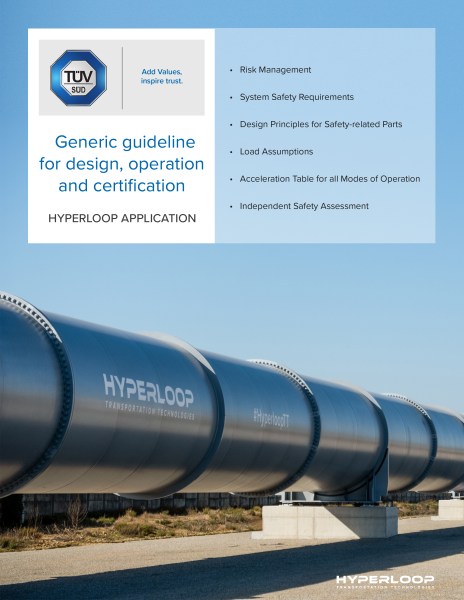 To continue that evolution, the company wants to see the EC create a certification program that would draw on standards and testing methods already in place for industries such as aerospace and trains.

“The EU is a world reference for transport research, safety standards, and regulation,” said Elisabeth Werner, director of Land Transport at the EC’s Mobility and Transport ministry, in a statement. “To facilitate their development and being open to innovation — this is why we are interested in the analysis presented here on Hyperloop. Hyperloop as [a] new transport [technology] can be a great opportunity to connect EU countries and regions even better and to deliver energy-efficient, carbon-free land transport.”