Google announced its financial results for the fourth quarter of 2008 today, and it’s good news: The company once again beat Wall Street’s estimates. Net revenues stood at $4.22 billion, or $5.10 per share. Wall Street had been looking for something more like $4.12 billion in net revenue, or $4.96 a share.

Google’s overall revenue of $5.70 billion represents an increase of 18 percent from the year ago period, and an increase of 3 percent over last quarter. In terms of U.S. versus International revenue, things are equal now with both sides contributing 50 percent.

Google notes that it is continuing to hire, but it only added about 100 employees in the past quarter. As one might expect, the company did not address the recent layoffs.

One of the biggest items announced today was that Google would allow employees with underwater options to exchange them. You can read more about that here.

“Google performed well in the fourth quarter, despite an increasingly difficult economic environment. Search query growth was strong, revenues were up in most verticals, and we successfully contained costs. It’s unclear how long the global downturn will last, but our focus remains on the long term, and we’ll continue to invest in Google’s core search and ads business as well as in strategic growth areas such as display, mobile, and enterprise.”

Google’s stock price is up, though not too substantially in after-hours trading right now. Currently, it’s up about $5 a share, or 1.6 percent. 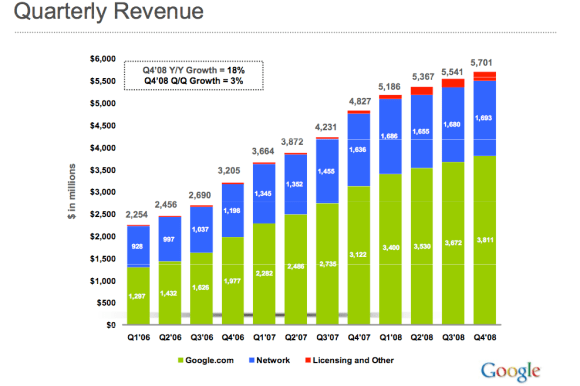 Notes from the call with Schmidt and other Google executives:

Highlights from the Q&A session (paraphrased):

We’re contuing to update this post with the numbers as well as points of interest from Google’s earnings call.