Amid stories of doom and gloom about the economic situation both in the United States and abroad, Google brought some good news today. The company beat analysts’ expectations for its third quarter. Wall Street is pleased, Google’s stock is up more than 7 percent right now in after-hours trading.

For the quarter, revenues were $5.54 billion, net income was $1.56 billion and earnings per share were $4.92. This easily beat the average analysts were expecting of $4.74-a-share. Net profit rose 26 percent.

The reason? Ad sales are still going strong. And Google is confident that they can remain strong even in troubled times because the ads are targeted.

Despite the good news, Google made it clear that tough times lie ahead. Sure, this quarter showed 31 percent year-over-year revenue growth, but when compared to last quarter, growth was a mere 3 percent. One bolded bullet point on Google’s “highlights” slide reads: “Maintaining a clear focus on operational efficiency and cost containment, better positioning Google for healthy long-term growth.”

Revenue from within the U.S. actually grew in Q3 when compared to international revenue. This reverses a trend that Google had been seeing since the end of 2007. The U.S. accounted for 49 percent of revenues in Q3 (up from 48 percent in Q2), while international markets made up 51 percent (down from 52). 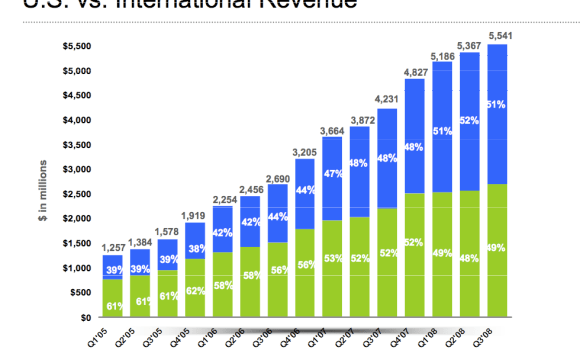