The events listing business has shrunk, with one competitor, Attendio, dropping out lately. The leading remaining competitors are, in rough order of apparent market share, Eventful, Yahoo’s Upcoming, Zvents and Going.com.

Among those four, there’s not yet a clear leader, nor have they yet attracted tens of millions of users — a reason Attendio cited for stepping aside. Capturing people’s attention when it comes to events, it seems, is harder than it might appear.

Further, there’s the risk of a large site stepping in — whether Google, with a new search category, or Facebook or MySpace with their own listings. As more data moves online, it becomes ever easier to simply collect and list events (Google, in fact, already offers a non-automated calendar tool). More is needed.

To defend against any such incursions, each of the four major sites has its own strategy for differentiating itself.

Eventful
The largest events site, and one of the oldest, Eventful is approaching three million registered users, and receives more than eight million pageviews each month not including its automated emails, which CEO Jordan Glazier told us people actually open between 40 and 80 percent of the time. 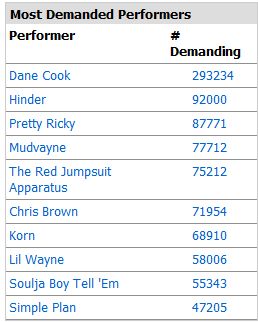 Part of Eventful’s success stems from its early comprehensiveness. During a test run of the site, I found a surprising number of listings in my small, boring hometown (Danville, Virginia, if you’d like to try for yourself) including a scrapbooking social and karaoke at Ham’s, a local bar.

However, Eventful is counting on major events and performers to keep it on top. One of the site’s more popular sections is a feature for fans to demand that performers visit their hometown.

The performers can watch the numbers grow, and when they’ve reached a high enough point, the performer can schedule an appearance, and using Eventful, can notify expectant fans that they’re on the way.

Yahoo Upcoming
While Upcoming started out as an independent events listing site, Yahoo snapped it up in October 2005 as part of a campaign to expand its local offerings.

The site has since been integrated with some other Yahoo offerings, like Yahoo Autos and Calendar. While Yahoo won’t reveal specific traffic information to us, it did say that the number of unique visitors coming to the site increased 102 percent in the year since August 2006. That would put it slightly above Zvent’s user numbers, based on the last available traffic stats for the separate Upcoming.com domain (the site is now under the main Yahoo domain).

Upcoming’s product manager, Vince Maniago, told us that Yahoo wants to make its listings comprehensive — likely with the intent of blocking any move by Google to capture listings with a search category. However, Yahoo’s search engine doesn’t give special weight to its Upcoming event listings.

Maniago said the site will continue working on fleshing out and adding to its listings, focusing on quality. “Everyone has some kind of listing, which is why it’s so fragmented,” he told us, adding that making the listings both relevant and accessible is the priority.

Zvents
While Zvents was founded back in March 2005, it didn’t find much traction until later. In December 2006, Zvents became the events platform for Boston.com, the portal for the Boston Globe, and found its true calling in local search, which includes things like movie show times and department store sales events.

That pulls in about five million page views a month for the site, but perhaps more importantly, is fueling a growth rate for new visits that the company says is averaging between 30 and 50 percent each month, faster than competitors.

The focus is on information, provided in a calendar format. Where people already search online for listings or addresses, Zvents wants to provide an easily accessible calendar that their partners, who include many newspapers, can use.

Zvents isn’t betting the entire farm on local search, though; after all, Yelp Events is trying to do the same thing. CEO Ethan Stock has hinted to us that Zvents will release an “analytic platform,” based on its local search technologies within a few weeks. 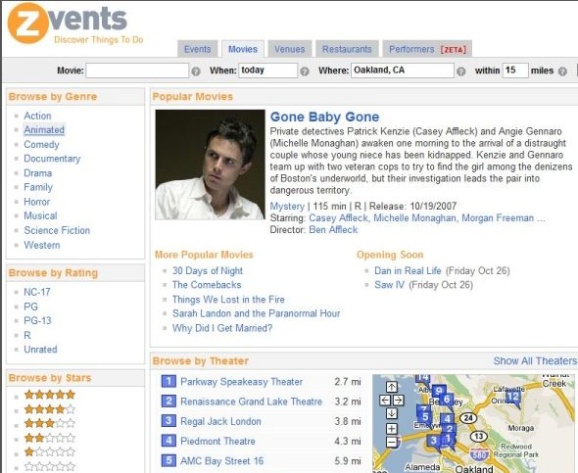 Going.com
Formerly known as HeyLetsGo, Going.com changed its name in April, around the same time Attendio launched. However, the site has some notable differences from the others.

First, it only offers event listings in five major cities, making it more similar to Yelp (which has its own listings site, Yelp Events). The limited focus has actually helped — Going’s traffic appears to be near Zvent’s levels.

Second, the site has an emphasis on its users meeting up in real life, even arranging some events on its own. For example, Going arranged a three-city concert tour for the launch of the independent airline JetBlue.

Conclusion
Although the older sites would like to be known as mature market leaders, the online events industry is still young, and no dominant business model has emerged.

One of the Holy Grails for all the sites mentioned is ticket sales. If Eventful, for instance, could pair up with Ticketmaster for a share of the revenue, the site’s future would be set — at least, until Ticketmaster decided they could make their own events site. Eventful says it is working on similar deals now.

Their best bet is to take more active roles, from helping events get started like Eventful to organizing them directly, as Going does somewhat less often. Beyond just collecting data, having a direct role requires expertise that an automated listing site can’t easily match.