Evernote CEO Phil Libin spoke today about how his company is trying to rethink the way it builds apps and services. He explained that today’s workforce does four main things when they’re creating — write, collect, find, and present — and the company is trying to address all those needs.

Previously, the web client had been thought of as a backup for Evernote’s native desktop and mobile apps. The new client is available as an opt-in feature today. “It’s built to eliminate distractions,” said Libin, adding that the old client, while still available, will eventually go away.

Now, when you’re writing, all the visual noise of navigation and features is hidden away. When you’re done writing and need the client’s three-pane mode, all the tools and features come back into view.

Above: The new “Scannable” feature in Evernote lets you scan documents directly into the app on a mobile device.

Doing away with the ‘tyranny of the inbox’ and ‘hostile’ presentations

Evernote also announced a digital workspace for teams called “Work Chat.” The idea is replace the dreaded email inbox — something quite a few companies are already trying to do. “The inbox made sense when it was actually a physical inbox — around the time of the Civil War,” Libin said. “We are trying to break the tyranny of the inbox, that long list of messages that you’re never going to get through.”

Instead, Evernote offers an AI-powered workspace where team members can collaborate and communicate in real time. For instance, if a coworker is working on the same note back at the office on desktop, that person can tell if a mobile user is looking at and working on the same document. Users are represented by thumbnails of their faces. As more people show up, a list of people (and some contact info) appear in a list on the mobile and desktop app. Then, a collaborative messaging session can ensue.

“This takes us from note-taking to being the workspace,” Libin said. “This makes Evernote a great place to work; we want you to do your life’s work in Evernote.”

Enterprise teams make lots of presentations, and Evernote wants to improve how they do it. Libin said that traditional Powerpoint-like presentations are “hostile to the audience” and need to be improved upon. Its new Presentation mode is the company’s solution. It will enable users to embed images in tables and create a full-screen mode to show whole documents or images, compete with headers or footers.

Both features will be available in November.

Over the last six years, a lot of folks have begun to use Evernote’s note-taking software as a sort of “external brain,” say the company’s creators. Soon, when you’re writing in Evernote, the software will get busy in the background looking for information that’s relevant to your subject matter, Libin says.

In the Mac client, for instance, he showed how Evernote can bring in a notification when other people in the company are writing about the same topic the user is. Through a connection with LinkedIn, Evernote can pull in bios of people mentioned in Evernote notes. Evernote will also soon find news articles that are relevant to what the user is writing and import the content directly into the note. 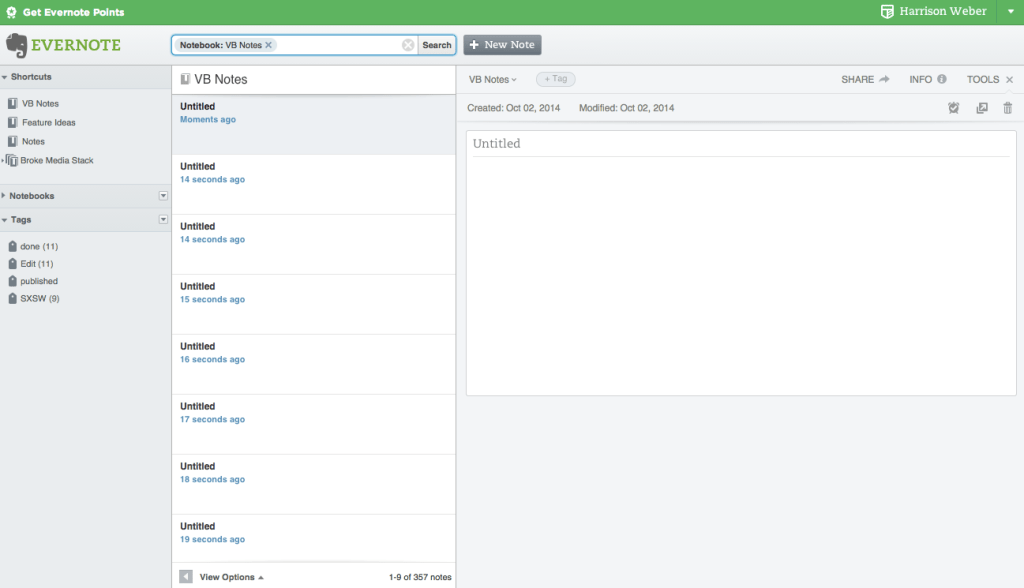 Above: The old Evernote client is still available, but will eventually be phased out.

Evernote is also talking about its relatively new Marketplace, in which it sells productivity tools like scanners and styluses, and lifestyle products like bags. Some in the media saw Marketplace as a bit of a joke when it launched, but the company has sold more than $12 million worth of products, says Libin, including half a million Moleskine notebooks. So it makes sense that Evernote is launching a new day planner with Moleskine, which the Evernote app will recognize and easily scan.

Other top-selling Marketplace products will be integrated, including the Fujitsu ScanSnap scanner and the Jot Script pen stylus. You can now scan images directly to a mobile device using the ScanSnap scanner, and multiple users can use the scanner with apps on their phones. The new feature, Libin says, is called “Scannable.”

As of May, Evernote had more than 100 million people using its suite of note-taking apps. Most of those use the core Evernote app across various platforms, though sketching and annotation app Skitch and handwriting app Penultimate have 16 million and 10 million, respectively.

Evernote’s competition has been busy in the last year as well. In March Microsoft launched OneNote, its note-gathering service, on the Mac. And it made the app free.