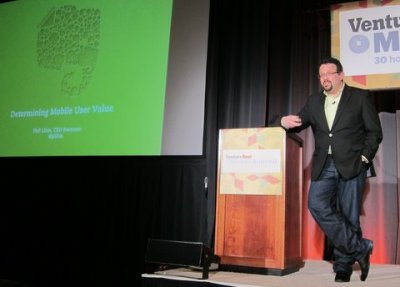 Evernote, a note-taking and reminder app that works across computers, phones, and mobile devices, said today that users of Apple devices are more valuable to the company than non-Apple users.

The comments, from Evernote chief executive Phil Libin today, confirm what many are already seeing in the mobile industry.

Libin said that iOS was its leading platform for overall revenue, accounting for 28 percent. iOS also topped all other platforms when it came to total amount of users gained per Evernote developer working on the platform. It also led in total revenue earned per developer. Evernote, in the end, is a compelling case for success on Apple’s iOS app store.

Desktop Mac users also stuck with the service more than any other platform’s users , and they also generated more user and revenue growth than their Windows counterparts. Libin said he wasn’t sure why Apple users end up being more comfortable paying for a service, but obviously it’s an important figure to note. In a ranking of overall user value, Libin notes that iOS and Mac rank first and second respectively, while Android ranks third.

Libin made the comments on stage this evening at VentureBeat’s Mobile Summit. And the value of Apple users was just one of four main points in his presentation about Evernote’s massive success.

The company’s software lets users save notes — anything from text, images, photos, or files — on their computers and mobile devices, which are then synchronized to cloud servers and subsequently accessible on any web-connected device. Users can also subscribe to premium features, including larger file upload capabilities,for $5 a month or $45 a year.

Evernote has long said that its users become more valuable over time, so it’s no surprise that the first major point Libin jumped to was the company’s most valuable users. He also discussed some new analysis around Evernote’s “cohort” user classification, which is a method the company uses to group together users by the month they first started using Evernote. After first joining the service, most users don’t return, but those select few who do end up generating tons of revenue.

The March 2008 cohort, for example, consisted of 31,334 users. By June 2008, only 11,000 of those users remained, and the company earned a measly $700 from them in that month. But by January 2011, those users ended up contributing over $10,000 in a month. That’s because users find Evernote more valuable the longer they use it, which leads them to subscribe to premium features.

Libin mentioned that this sort of service — one that becomes more useful over time — wouldn’t be possible without cloud-based infrastructure. Consumers are more used to services that become less valuable over time, or those, like a newspaper, that have sustained value.

Libin then went on to point out data that showed how native application users are far more valuable to Evernote than web users (the company’s top revenue came from its iOS, Windows, and Mac applications). Additionally, he said that we shouldn’t discount desktop applications — the Windows application generated 24 percent of the company’s overall revenue, while the Mac application accounted for 20 percent.

So to recap, here are Libin’s four major conclusions from his presentation: