Over the last six years, a lot of folks have begun to use Evernote’s notetaking software as a sort of “external brain,” say the company’s creators.

And we do mean a lot of folks. 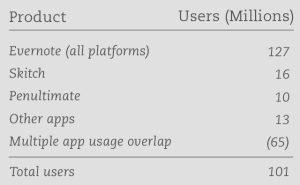 Evernote now has over 100 million people using its suite of notetaking apps, the company announced today. Most of those using the core Evernote app across various platforms, though sketching and annotation app Skitch and handwriting app Penultimate have 16 million and 10 million, respectively. Evernote acquired both apps several years back: Skitch in 2011 and Penultimate in 2012. Other apps under the Evernote umbrella have a combined 13 million.

Evernote’s headquarters is in Redwood City, Calif., but it’s managed to reach a lot of people outside the United States: 35 million in the Asia-Pacific region; 31 million in Europe, the Middle East, and Africa; 27 million in the U.S. and Canada, and 8 million in Latin America.

Later on in the post, Libin notes how little the company has spent on advertising since its inception: less than 1 cent per user, which equates to under $1 million.

That total seems absolutely microscopic in contrast to Evernote’s valuation, which analysts estimate to be greater than $1 billion. To date, the company has raised over $240 million in venture capital from about a dozen firms, including Allen & Co., China Broadband Capital Partners, Meritech Capital Partners, and Sequoia Capital.

Don’t expect an IPO any time soon, though: Libin doesn’t expect to take the company public for another two or three years, the chief executive said in December.

With Evernote, people can write notes, take photos, make to-do lists, and more — and sync all that content across their various devices. The company earns revenue from its premium subscribers, business accounts, and online marketplace.