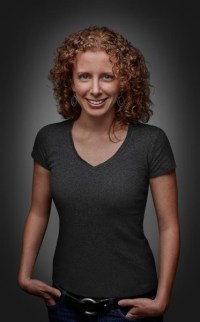 You might think that a mobile strategy is easy to create, that it’s possible for your business to launch an app that’s a copy of its Web browser interface, or that you can put it out there and downloads will happen. But it’s not. Just ask Jamie Hull, Evernote’s vice president of mobile products, who spoke with VentureBeat about her company’s tactics and where it’s going in the future.

With more than 100 million registered users, Evernote is no stranger to the changing mobile landscape. This “unicorn” startup company has spent considerable resources making its productivity tools (e.g. note taking) accessible across a wide array of platforms, including the Web, smartphones, and even wearables. But it doesn’t mean that the company was perfect in its execution — it’s had some unfortunate missteps along the way, but at the same time, it discovered a formula that worked.

To give you a quick insight into how important mobile is to Evernote: it’s the fastest-growing user-acquisition channel for the company. 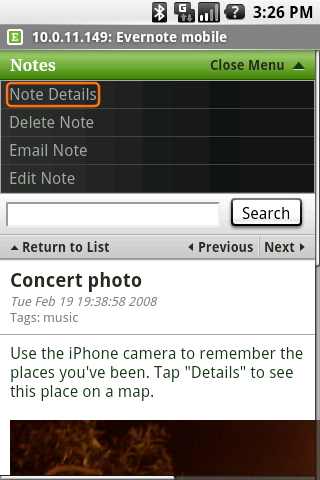 Above: Screenshot of Evernote for BlackBerry v1.0

In the beginning, Evernote started out just as a desktop application with more function than design. It wasn’t mobile-friendly at first, and Hull says that after the popularity of the BlackBerry, Evernote discovered that users may want to access their notes on the device. But the first iteration of Evernote for mobile wasn’t spectacular — it was just available on the mobile browser and had read-only permissions.

And of course, that experience didn’t work. Evernote tried a new approach when it released an app on Apple’s store around the time when the first iPhone was launched. Hull says that this galvanized the company’s strategy. “All of a sudden, Evernote made sense,” says Hull. It saw that it had a retention issue when it came to the Web and desktop, where users just didn’t seem to return. But when it arrived on mobile, that dynamic changed, and the “platform really started to take off.”

Realizing the potential, the company adopted an “Evernote everywhere” strategy, launching versions of its apps in different areas to attract early adopters.

When Google launched the first iteration of its Android marketplace (which would eventually become known as Google Play store), Evernote was one of the earliest apps on it. The same happened with the Windows Phone marketplace. When Google Glass, the Pebble smartwatch, and the Apple Watch rolled out, Evernote was there.

But while it might seem smart to be everywhere — you are where your potential users are — it wasn’t without any mishaps. Evernote discovered that its Windows Phone 7 app didn’t take off as it had hoped. “In the early days, we may have been overly ambitious in the apps that we launched and supported,” Hull remarked. Google Glass was also another platform where the app failed to gain traction, but Evernote remains set on its path. 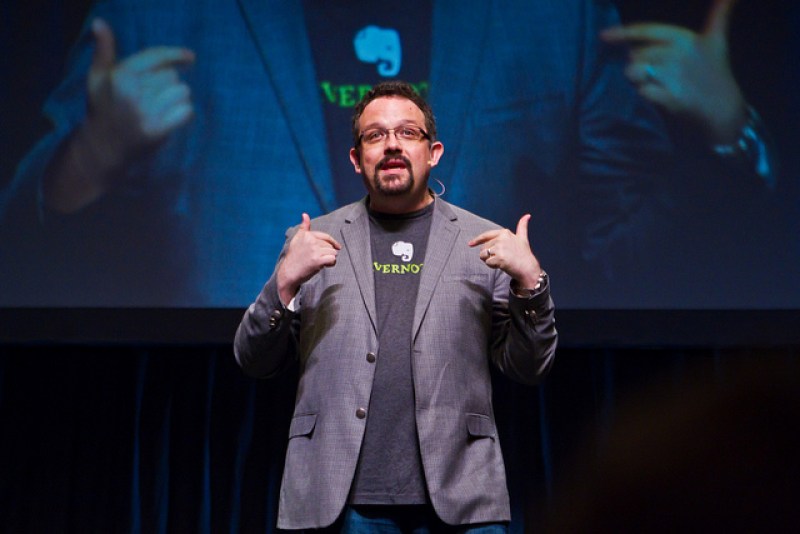 While “Evernote everywhere” may not have had the immediate success the company hoped, it’s still a part of Evernote’s core mission. “We still want to be in every reasonable device; every device that we think is cool and has a shot of success,” said company CEO Phil Libin in an April 2015 interview.

Want to hear more about mobile strategy and design from Evernote’s Jamie Hull? Then you won’t want to miss her panel at VentureBeat’s MobileBeat conference, being held July 13-July 14 in San Francisco. Tickets are still available; sign up here.

Try, try again, but with users in mind

Undeterred, Evernote continued to press forward with its mobile strategy, but how was it really doing? “In terms of adoption patterns, in general, people would come to Evernote, try it out for a week, a month, or a decent amount of time, and then they would tail off. Eventually, they may come back, but there’s no easy way to reclaim them … having a service that was in a single location, device, or web service accessible on a desktop was less impressive than something you can access from your pocket,” says Hull.

“Notes are meant to be bites of information you can pull up on the fly,” Hull said. “When you have a desktop heavily connected to the Internet, it’s not that impressive.” Evernote discovered additional use cases that it could cater around in the mobile space, such as taking pictures of your car so you know where you parked it or scanning a business card from someone you just met so you won’t lose it.

Above: History of Evernote for iOS

Evernote hedged its bets on a few things, including going all in on native apps — it didn’t use HTML5 for any of them. The company’s designers and engineers were adamant that with the heft of data being moved around in the apps, it required “going native” and not using HTML5. Hull acknowledged that this way would result in expensive upkeep, especially with customization of apps for platforms, but “the experience and data being worked with is something that benefits the users.”

Another big bet was on how Evernote perceived mobile. The first-generation apps were all about earning users’ trust. “It wasn’t about doing something cool,” Hull explained. It was “super-utilitarian,” even up to the point where the design mimicked Apple to give the impression that it had the same quality as the software company. Hull shared that over time, Evernote moved toward trying to provide a more user-friendly experience.

Evernote’s multi-app approach sought to give users exactly what they wanted while also keeping things simple. It’s not perfect, and Hull admits that it’s something that people are still trying to figure out. Early on, the company thought that the core app needed to have multiple features because if you separated them, it would create unwanted confusion. According to Hull, you don’t get a chance to tell potential new users what app they should download. 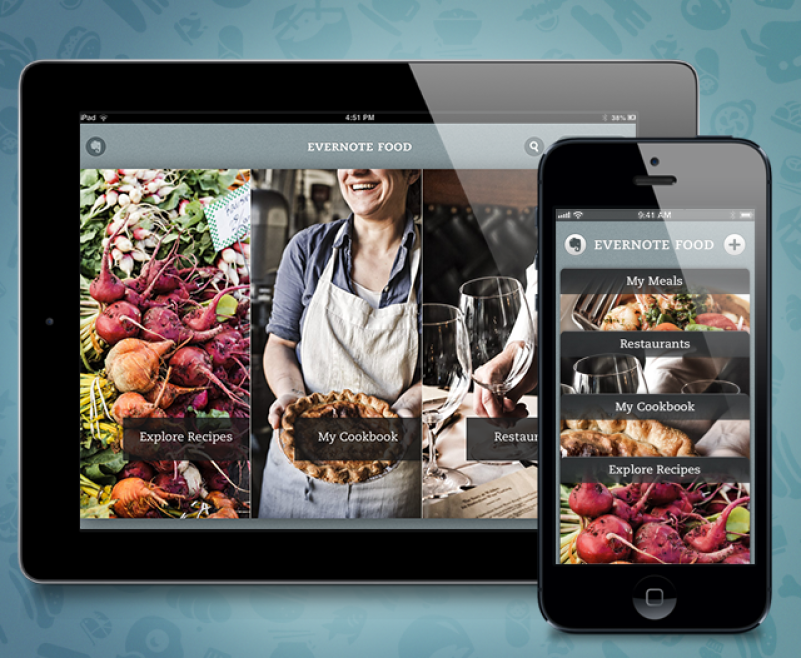 “Evernote is a generic platform that you can use for anything,” Hull said. After the bleeding edge and early adopters, the real problems lie with explaining your technology to the mainstream audience. So what exactly was Evernote? The company felt it was being underused, so it opted to launch several new apps, including Hello, Food, Peek, Scannable, and Context.

The goal was to cater toward specific use cases. With Hello, the idea was to teach mainstream users about scanning business cards, while with Food, it was to let them take something that they do on a daily basis (eat) and show them how to capture that experience and share it within the Evernote platform. It went on to shut down many of these standalone apps, but some of their features wound up being rolled into the core Evernote app.

Above: History of Evernote for Android

Today, Hull says the firm is focusing on making things simpler, but how to find the right balance can be tricky. She continues to explain that as more features are added to its core app, the experience can get a lot scarier. It shouldn’t be overwhelming and needs to grow up with you. Taking this to heart, Evernote has been working to implement certain actions such as displaying proactive notifications and featured introductions that appear based on what you’ve done.

When prodded for app usage statistics over the course of Evernote’s mobile lifetime, Hull would only tell VentureBeat that in general, “session numbers (how engaged users are with the platform) have held pretty steady. The number of times people come to the app hasn’t changed dramatically save for the introduction of new features.”

In this day of age, it’s understandable that developers are eager to “fail fast,” just like Facebook preaches. However, Hull cautions that before anyone subscribes to that practice, it’s important to understand where you are as a business. “The younger your company, the younger your users are, and the more tolerant they are of changes. You can afford to be more disruptive,” he said. But as companies, apps, and users mature, developers have to be more careful about what they disrupt — be sure to understand your base’s needs.

Another important tip for any company’s mobile strategy is to understand how and why people are using your app. Hull says that with version 7, the company took out features that were eventually put back in, but in a better way. Yes, people will get upset, but you won’t know what works until you better understand how people are using your technology.

It’s OK to do incremental changes over time versus a drastic redesign. Hull warns that if you opt for the latter, make sure that you’re doing user testing: “Get it out in front of people and don’t assume that you know more about people.”

It’s no surprise to see Evernote in the wearables space. After all, it fits with its mantra of being “everywhere.” When launching apps for the Pebble smartwatch, Android Wear devices, and Apple Watch, Hull had to once again evolve the company’s mobile strategy to accommodate this new form factor. She views smartwatches as companions to what’s on a phone.

“If you think of a wearable app as separate, you’re doing it wrong,” she tells VentureBeat. “The app that you build for the Apple Watch or Android Wear needs to be a window back to your phone. It shouldn’t duplicate, but enhance … you will still have a phone. No platform player is making a case that the phone is being replaced by the watch.”

In Evernote’s case, Hull says that her team knew any wearable app would need to be simple and glanceable — something that you could “look at in less than a second or so to get something valuable from it.” The company faced a tough challenge though: Unlike with the Web and early versions of the App Store, it wasn’t able to cater towards early adopters that it wanted. It had to abide by the target audience of Apple and Android Wear manufacturers: mainstream consumers.

With wearables, Evernote had to get more user-friendly and less techie. 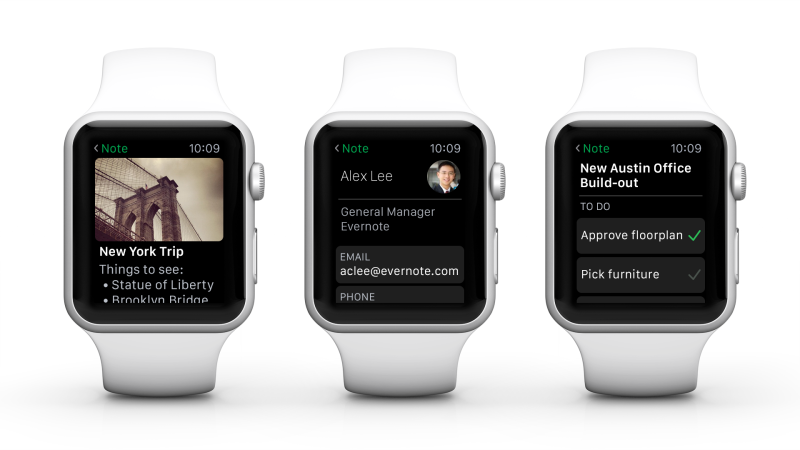 Above: Images of Evernote for Apple Watch

So what’s the future for Evernote on wearables? Hull shared what her company could be doing with the anticipated release of Apple Watch OS 2, specifically that Evernote’s developers are eager to test the speed and responsiveness of its app on it, along with the feasibility of displaying longer notes onscreen — something Hull says has been a big user request.

Additionally, she’s looking forward to how Apple improves the microphone software as we may see better transcription capabilities available on Evernote, such as saving audio files without having to worry about the anxiety of correctness. Lastly, another wish that could come about centers around complications: Will the Apple Watch OS 2 offer developers a “permanent place” on the screen instead of just displaying a logo whereby users will be able to get a better sense about what’s in their account?

Throughout VentureBeat’s conversation with Hull, she made it abundantly clear that Evernote is interested in offering its services on devices and platforms that “make sense.” This was the defense she gave when the service was one of the first apps available on Google Glass.