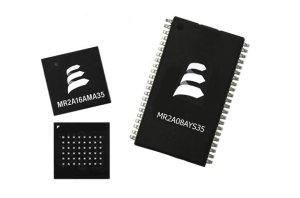 Everspin, a spin-off from Freescale Semiconductor that is creating magnetic-based memory chips, is announcing a new generation of chips today.

The new chips are likely to broaden the use of the MRAM technology, although won’t yet threaten the existing empires of flash and DRAM. But there is no question that MRAM is gaining ground, said Saied Tehrani, president and chief operating officer of Everspin. The first generation of chips made in 2006 sold hundreds of thousands of units. Dozens of customers are using them in storage systems, industrial control systems (where Siemens is the customer), transportation systems, gaming devices and communications equipment.

Samples of the new chips are available now, and production volumes will be ready within months. The new 1-megabit chips are built with 130 nanometer manufacturing processes at the company’s factory in Arizona. The earlier chips were built with less advanced 180-nanometer technology.

Everspin spun out of Freescale in June with $20 million in new venture investment, after starting its MRAM production under Freescale in 2006 and introducing new versions in 2007. It has 50 employees. The company is not currently seeking new funding.