Every time we hear from one of the numerous Chinese video sites, they compare themselves to YouTube in its early days. But a closer look at the data suggests the video phenom in China just isn’t comparable. 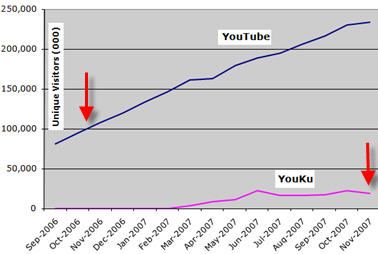 For example, Youku reports today that the number videos viewed daily on its site has reached the levels YouTube enjoyed in Oct. 2006 when it was acquired by Google. This follows a similar statement by another Chinese competitor 56.com.

Youku says it has 100 million daily views, citing Nielsen/Netrating, which is indeed the level of views that YouTube had back in the day. That’s a whopping 30 million more views per day in November, when we first wrote about the company. However, Youku has far fewer unique visitors than YouTube did back in 2006, according to Comscore’s global data. And while no slouch, Youku doesn’t appear to be growing in the same upward right manner YouTube did, almost without exception — and continues to grow today. Unless Comscore’s data is dreadfully wrong, which is a possibility. However, Youku also has several competitors who say they are growing just as quickly. For example, Tudou and 56.com are just as large, if not larger, in terms of traffic.

Youku has raised US $40 million in three rounds of of funding from Brookside Capital, an affiliate of Bain Capital, Sutter Hill Ventures, Farallon Capital and Chengwei Ventures.

Aside from the question about Comscore’s reliability, there’s a story brewing about the statistics game that is going on in China right now, at least according to what we’re hearing. We’ll try to follow up shortly.