The first day of Microsoft’s Build 2018 developer conference came and went, and the technology giant unveiled myriad tools and products for developers and geeks of the world to chew on.

From artificial intelligence (AI) to Azure, here’s a quick recap of everything Microsoft announced at Build 2018.

Arguably the most exciting facet of Build 2018 was Microsoft demonstrating its Cortana digital assistant working in conjunction with Amazon’s Alexa.

We already knew that the two technology giants were working on this collaboration, but seeing the fruits of this tie-up for the first time was a major development.

In a nutshell, you will soon be able to do things like hail an Uber with Alexa through your Windows 10 PC or check your schedule with Cortana on an Amazon Echo.

The integration will first be made available in limited beta, and no timeframe has been given for a wider rollout.

Build was once a largely Windows-focused event, but with the company’s shift to the cloud, Azure now plays a significant part in the proceedings. At Build 2018, the company announced it was open-sourcing the Azure IoT Edge Runtime to allow its customers to modify, debug, and better control edge applications.

Elsewhere, Microsoft revealed that it has added support for Kubernetes management via the Azure Kubernetes Service (AKS), pushed its Azure Maps platform into generally availability, announced a couple of updates related to Windows 10 IoT and Azure Cosmos DB, and unveiled a partnership with DJI and Qualcomm for its Azure, AI, and IoT push.

Additionally, Microsoft announced Project Kinect for Azure, which is basically a package of sensors, including its next-gen depth camera, for AI developers to experiment with.

Microsoft also committed more revenue to developers for consumer apps (not including games) in the Microsoft Store. Moving forward, developers will keep 95 percent of revenue earned through selling the app itself or through in-app purchases, though that figure drops to 85 percent in situations where Microsoft delivers a customer to the developer.

Microsoft’s mixed reality efforts didn’t get a huge amount of attention at Build 2018, but there were a couple of notable reveals on this front. Arriving as a preview on May 22, Microsoft Remote Assist and Microsoft Layout are two new apps built specifically for the company’s HoloLens headset.

And the Microsoft Layout app will allow customers to “design spaces in context with mixed reality, using HoloLens from concept to completion.”

Microsoft also announced a new software development kit (SDK) called Speech Devices, which enables audio processing across multiple channels and which can integrate speech recognition into hardware devices. The purpose of this SDK, specifically, is to enable voice control in noisy environments.

Microsoft first unveiled Project Brainwave last summer as a system for deploying super-fast artificial intelligence via specialized chips. At Build 2018, the company revealed that the system is now available in preview on Azure, which Microsoft claims makes its Azure cloud platform the fastest to run real-time AI.

Microsoft may have missed the boat with regard to mobile, but it is still focused on building bridges between popular mobile platforms (i.e. Android and iOS) and Windows PCs.

With that in mind, the company announced a new Your Phone app for Windows 10 that will let you access your phone’s content, such as text messages, photos, and notifications, from your Windows 10 machine. 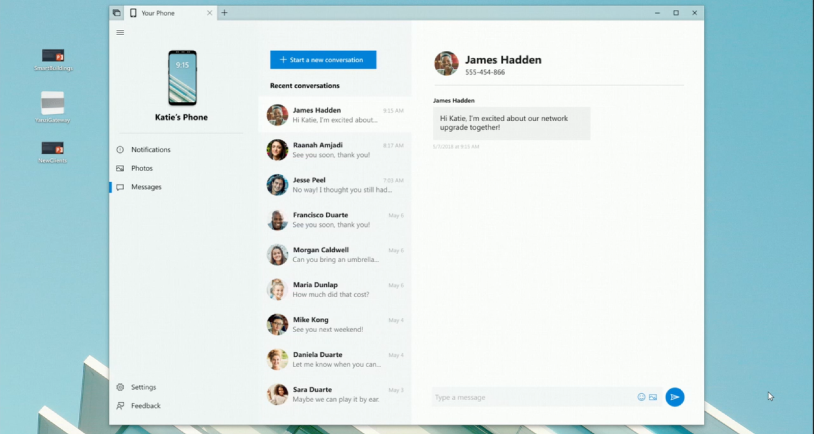 Above: Your Phone: Windows 10

Additionally, Microsoft announced that Windows Timeline, a feature that lets you search through all the activities you carried out for the past month, is coming to iOS and Android via Edge and Microsoft Launcher, respectively.

AI is very much the technology trend of the moment, and this has been reflected in Microsoft’s activities of late.

At Build 2018, the company announced the AI for Accessibility program, which aims to explore ways AI can improve the lives of those with disabilities. To do so, Microsoft pledged $25 million over the next five years to developers, universities, and non-governmental organizations working toward AI-based tools that will help people with disabilities.

Microsoft’s annual Build conference still has two days to run, so it’s possible more announcements will emerge from the event. We will update this piece accordingly.