Microsoft is throwing a big fan bash in Mexico City, and it made a lot of news announcements about new games, services, and acquisitions at its XO18 fan event. We’ve summarized what happened at the event here: 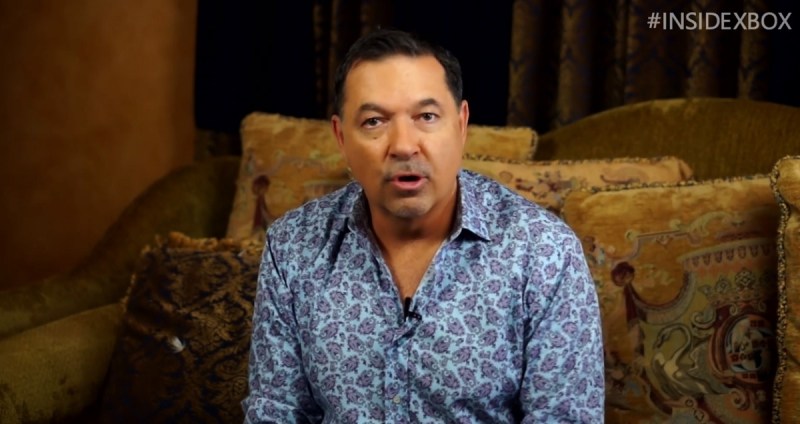 Above: Brian Fargo announces that Microsoft is buying InXile, and he is not retiring anymore.

At the recent Electronic Entertainment Expo event, Microsoft acquired four development studios and opened a new one. And today, it announced it had brought in InXile Entertainment, the maker of the Wasteland and The Bard’s Tale series. InXile’s head is game pioneer Brian Fargo.

The deal is part of Microsoft’s strategy, headed by executive Matt Booty, to bring more exclusives to the Xbox platform.  As part of Microsoft Studios, InXile will have the support and freedom to fully realize its creative ambitions on both existing franchises and new projects, Microsoft said.

The studio will continue to operate autonomously, with a focus on role-playing games.

“We’re excited to have the team, the people, the craft,” Booty said onstage. In a video, Fargo said, “I am not retiring anymore soon,” even though he previously announced he would. 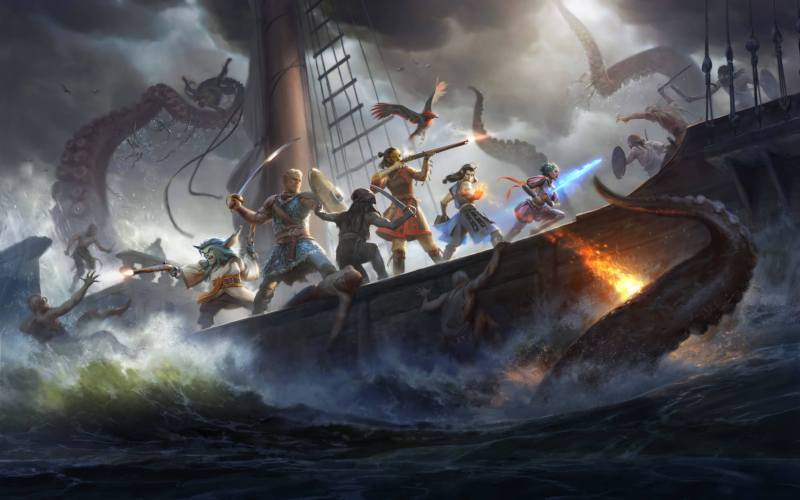 The Irvine, California-based Obsidian Entertainment was founded in 2003 by industry veterans from Black Isle Studios (similar to InXile). It quickly made a name for itself with the Xbox exclusive Star Wars: Knights of the Old Republic II — The Sith Lords. Over the last fifteen years, the studio has delivered genre-defining RPGs to players on both console and PC through titles, including Fallout: New Vegas, South Park: The Stick of Truth, and Pillars of Eternity.

Microsoft said it will let the studio preserve its unique culture and build on its talent and vision to fully realize their creative ambitions. Both Obsidian and InXile will continue to operate independently. 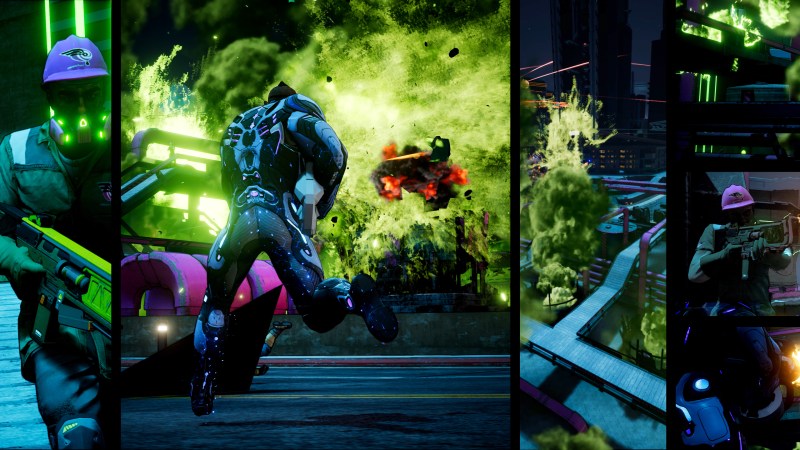 In Wrecking Zone, environmental destruction is a weapon you can use to take down your enemies.  Developed by Microsoft Studios in collaboration with Sumo Digital and Elbow Rocket, Crackdown 3 will bring super-powered agents to New Providence, an action-packed open-world.

Your job is to take down a criminal corporation using an explosive set of weapons and abilities. You can play the campaign in single-player mode or in co-op with a friend.

Crackdown 3 is available at launch with Xbox Game Pass and globally on Xbox One and Windows 10.

Microsoft will give the original Crackdown, enhanced for Xbox One, to all fans free of charge from now until November 30. Microsoft also showed new content from Just Cause 4, Sea of Thieves, State of Decay 2, and more. Microsoft now has a total of 327 titles enhanced for the Xbox One X console.

Microsoft said that PlayerUnknown’s Battlegrounds (PUBG) will be coming to its Xbox Game Pass, a monthly subscription service that costs $10 a month.

Microsoft is adding 16 new games at varying dates to Xbox Game Pass, bringing the total to more than 100 titles. If you sign up today through January 3, you can get the first month for just $1.

Thief of Thieves is available starting today. Other titles on the list starting in December include Ori and the Blind Forest, Kingdom Two Crowns, and Hellblade: Senua’s Sacrifice. On November 22, Microsoft is adding Agents of Mayhem, MXGP3, and Thomas Was Alone. And new indie games coming for the holidays include Aftercharge, Supermarket Shriek, Mutant Year Zero, Pathologic 2, The Good Life, Void Bastards, and Secret Neighbor. Next year, Ori and the Will of the Wisps will be added. 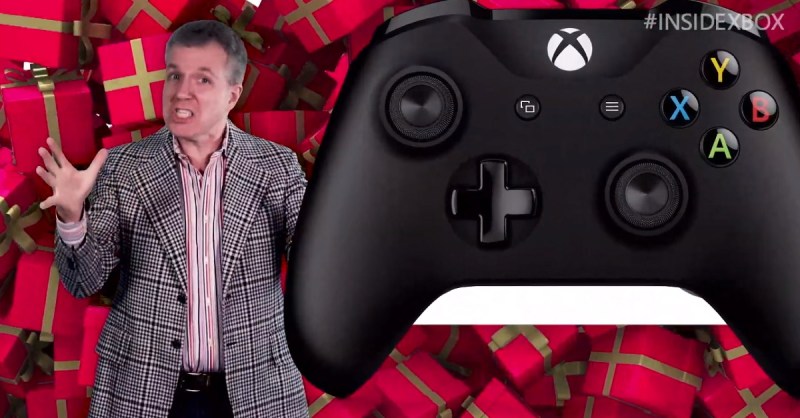 Microsoft said it is offering discounts of up to $100 off select Xbox One console deals. The lowest-priced Xbox One X will be available for $400. You can save $10 on Xbox wireless controllers, and there are a bunch of game discounts — like 35 percent off PUBG. 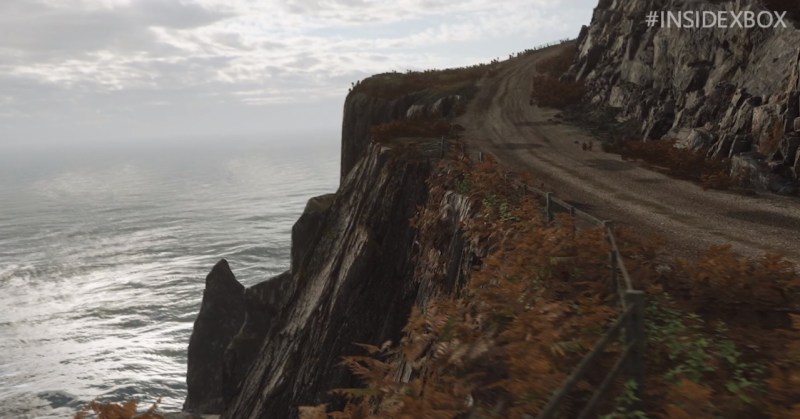 Ben Thaker-Fell, chief designer of the Forza Horizon series, announced the first expansion for Forza
Horizon 4, Fortune Island, which will release on December 13 on Xbox and Windows 10 PCs.

It takes players on to the remote northern reaches of the British Isles, where they will encounter extreme conditions, including fierce lightning storms, perilous cliff-side dirt roads, and sweeping paved mountain switchbacks under the glow of the aurora borealis (Northern Lights).

Forza Horizon 4 players will also be able to drive all five of Ken Block’s high-powered, custom-built Ford
vehicles from the upcoming GymkhanaTEN, the 10th installment of the Gymkhana viral video franchise.

These rides began rolling out in Forza Horizon 4 earlier this month for Car Pass members with the release of the 1977 Ford GymkhanaTEN F-150 Hoonitruck and the 1993 Ford Escort Cosworth Group A. Coming in November for all players are the 1965 Ford Hoonicorn Mustang V2 and the 2017 Ford Fiesta RS, and arriving in December is the 2016 Ford GymkhanaTEN Focus RS RX. 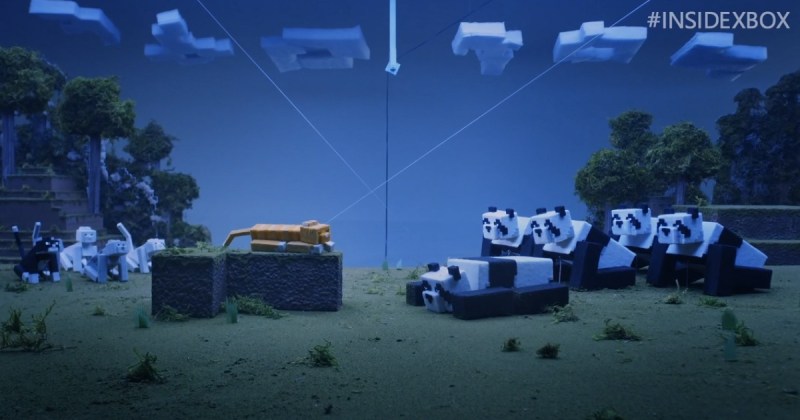 Above: Minecraft’s cats and pandas.

She showed off the contributions of one partner, PixelHeads, to the Minecraft Marketplace. There are now a total of 77 partners who have driven more than 13 million purchases for their creations since the marketplace launched last June.

Viewers also got a look at the history behind cats and pandas in Minecraft, which will be released next month. There’s a new game coming, dubbed Minecraft Dungeons.

Battle rival crews in The Arena in Sea of Thieves

Sea of Thieves will see its fifth free content update since launch. The Arena will release in early 2019, with a new competitive game mode that allows players to test their pirating skills in fast-paced matches against rival crews.

Each match is a race to find treasure that brings together all the most exciting elements of Sea of Thieves. The Arena also includes a new-tavern area together with a new trading company — the Sea Dogs — which will offer new goals, rewards, and opportunities to progress to Pirate Legend. 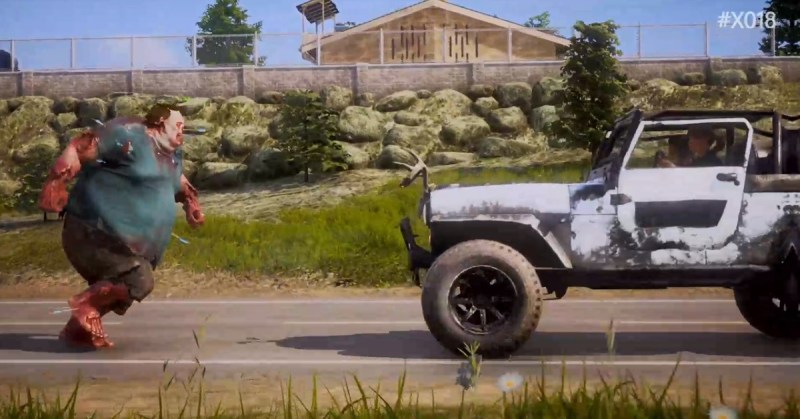 Above: Zedhunter is the new expansion for State of Decay 2.

Microsoft showed the next content pack for State of Decay 2 launching November 16: The Zedhunter Pack.

This new pack adds the powerful and silent crossbow as a new zombie-slaying weapon along with additional melee weapons, facilities, blood plague consumables, and gameplay updates — like the ability to re-spec your skills — all into the main game.

State of Decay 2 has four million players, and Microsoft will make Zedhunter available for free to all of them. The crossbows let you take out zombies quietly without bringing a horde down upon you. 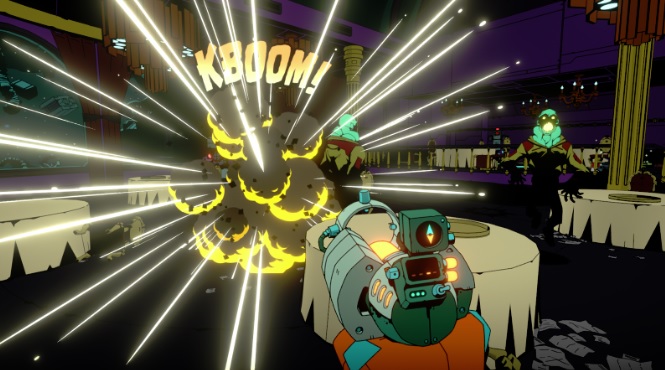 Inspired by BioShock and System Shock 2, Void Bastards is a strategy-shooter that will test your wits as well as exercise your aim. It is coming to Xbox as a console launch exclusive.

In the game, your job is to lead the misfit prisoners of the Void Ark through the derelict spaceships and myriad dangers of the Sargasso Nebula. You have to choose where to go, master combat, manage ship controls, scavenge supplies, and craft improvised tools. The campaign will last 12 to 15 hours.

Void Bastards will also come to Xbox Game Pass coinciding with its launch on Xbox One. It is coming from developer Jonathan Chey’s Blue Manchu, a new studio in Australia, and Humble Bundle.

Above: Shadow of the Tomb Raider’s The Forge expansion.

There are downloadable content expansions coming for Shadow of the Tomb Raider in the first of seven monthly updates. The first one is called The Forge, and it has new attack modes and weapons. 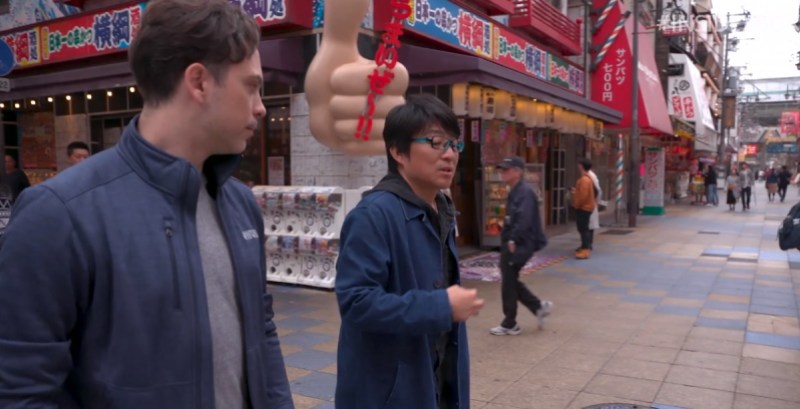 Capcom showed off Devil May Cry 5’s Void Mode, a training mode. It lets you experiment with moves and attacks. You can practice in The Void mode without damaging your Devil Breaker ability. You can use the Sweet Surrender Devil Breaker to heal yourself in combat, and you can also use Mega Man’s arm in the game. 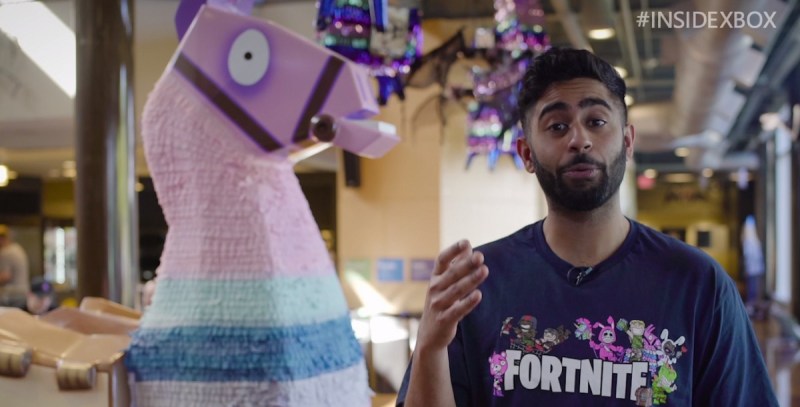 Above: Fortnite will get mouse and keyboard support on the Xbox One.

Next week, Xbox One support for the mouse and keyboard will arrive. There are a bunch of new games like Fortnite, Vigor, War Thunder, Xmorph Defense, and others that will support the mouse and keyboard. Fortnite will only match players who use mouse-and-keyboard functions in the same match, meaning it won’t mix mouse-keyboard and Xbox-controller players in the same match. It will be effective on November 14. Razer will have some accessories available, starting at CES in January.

And the Xbox Adaptive Controller will be available in 17 new markets in 2019.

Chris Charla of Microsoft said that ID@Xbox now has more than 1,000 indie games available, and they have been played more than 4 billion hours. He said some of the exciting new ones are Ooblets, Tunic, and Winter of Arcade (with multiple games). 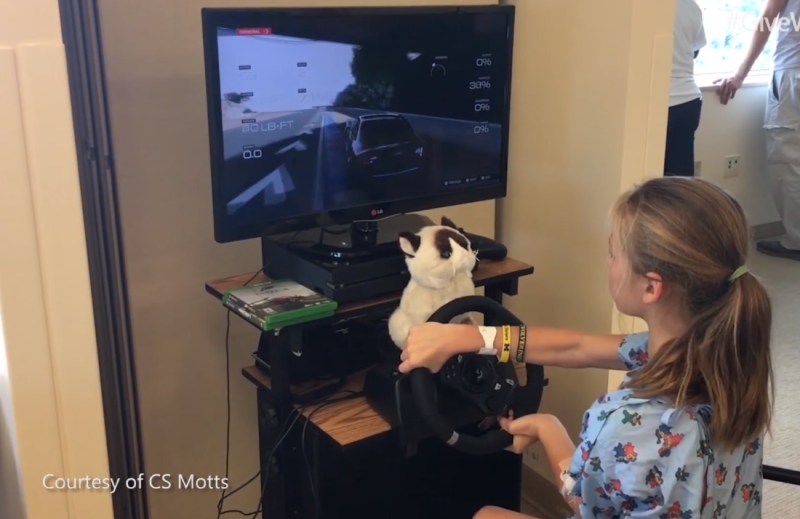 Above: #GiveWithXbox will help gaming charities.

Lastly, Microsoft’s #givewithXbox campaign will donate $5 of Xbox products for every photo shared on social media about “what gaming together means” with the hashtag. The donations will be split among four inspirational charities: Child’s Play, Gamers Outreach, SpecialEffect, and Operation Supply Drop.